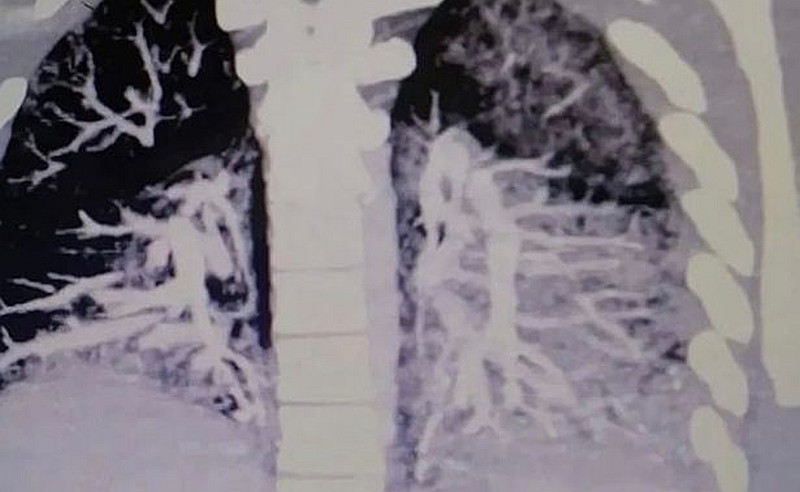 When sporty 19-year-old Anthony Mayo from Eerie, Pennsylvania fell unexpectedly ill in September, no one would have predicted the cause of his malady or the extent of the damage that his habit of vaping had caused. Initially complaining of feeling ill, Mayo looked pale and was clearly struggling to breathe when he was seen by medical professionals.

Subsequent x-rays showed lungs clogged with an oily substance that resembled cooking grease and which, having hardened on cooling, looks set to have scarred his lungs for life. This was vape oil, which had cooled, hardened, and severely congested Mayo’s lungs.

In fact, his doctors described Mayo’s lungs as resembling those of a ‘60-year-old, two pack a day smoker’, shocking his previously oblivious parents with the danger their son had placed his health in from what had seemed an innocent pastime.

Once in hospital Mayo has been treated to 100% oxygen both to allow him to breathe more easily but also to cause him to cough up as much of the offending oily congestion in his lungs as he can.

The numbers of people who have fallen ill due to vaping remain relatively low but are rising steadily, to roughly 500 in the US, of whom several showed similar symptoms of oil damaged lungs.

However, there have been vaping-related deaths in several US states, including California, Indiana, Illinois, Kansas, Minnesota, and Oregon – seven in total in 2019. Some of these individuals will have had previous underlying health conditions, but vaping was a contributing factor in their deaths.

The harm represented by vaping is much disputed. Certainly, the public health authority in the UK have confidently declared it 95% less harmful than conventional smoking, but some critics suggest they are ignoring the evidence for previously unconsidered forms of harm.

The UK also operates what is known as the ‘Yellow Card’ system, which encourages e-cigarette users to report any harmful effects.

However, it may also be that, in the UK, nicotine related e-cigarette products are very tightly regulated, whereas the cases of illness and even death in the US may be related to unregulated or illicit vape fluid, perhaps containing THC or synthetic cannabinoids, also known as ‘dank vaping’. It is undoubtedly true that Anthony Mayo, according to his father, had used THC infused vape fluid.

There is no doubt e-cigarettes have proven highly successful in drawing people away from conventional smoking, for some, apart from smoking altogether, helping to break the addictive cycle of smoking by replacing some elements of that habit.

However, US lawmakers are particularly worried that the marketing of vapes has been drawing in ever younger users, rather than adults who are already smokers and looking to quit. In fact, more than half of those admitted with vaping related illnesses have been under 25. A group known as The Campaign for Tobacco Free Kids has estimated that, across the US, over 20% of High School students use e-cigarettes.

The fears amongst lawmakers have already seen a range of new laws brought into effect to limit or alter e-cigarette use, including in Alabama and New York, with Michigan, Illinois, and Massachusetts looking to follow suit.

Vaping is outright banned in some countries, including India, and the World Health Organisation came out against it as far back as 2008, but the continuing evidence that it is much safer than smoking has led some to fear that part of this race to regulate or ban vaping is driven by the powerful smoking lobbies, looking to protect their well-established domination of the nicotine-addiction market.

There is also evident concern amongst experts that knee jerk moves to ban commercially available flavored vapes will do nothing to address the black market vape fluid that may well be behind the recent spate of e-cigarette related illnesses. However, there have been no long term comparative studies of vaping, since it is so new, and the public has very much been left to be the guinea pig in this experiment of the safety of e-cigarettes.