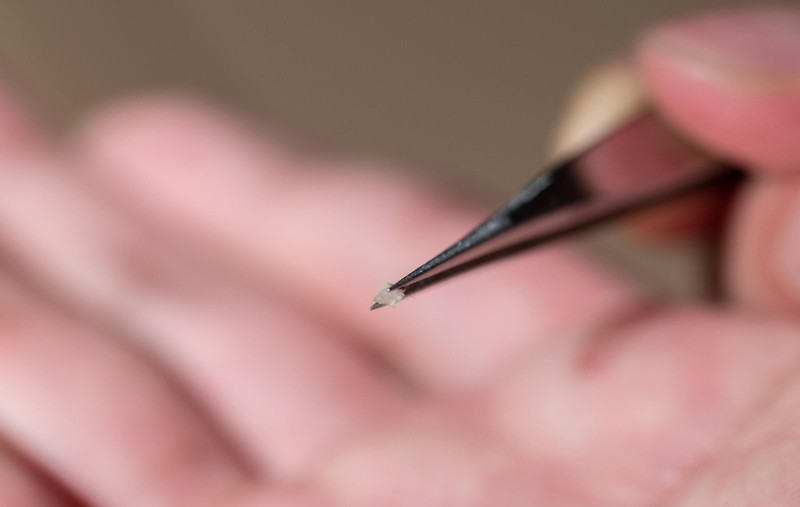 Bigger is not always better, as far as the technology industry is concerned. Take cell phones as an example. Back when portable phones initially became a reality, they were the size of a house brick. More and more effort was put into reducing the size of these devices until models that could fit into the palm of the hand were discovered.

Granted, there appears to be an upward trend for larger devices again now as more people consume media on their phones. For the most part, however, small was a selling point.

Scientists have taken this on board with the latest discovery that’s set to rock the world of technology. Tiny robots have been created with the use of a 3D printer – and when we say tiny, we mean it. It’s believed that these machines are roughly the size of a humble garden ant.

They will be controlled through vibrations. These micro-machines can sense the subtlest change in the environment around them, and if teamed up, they can be used to carry heavy objects. The long game, it seems, may be to insert them into the human body for medical purposes.

Surely something this small is no use to anybody?

You may be surprised. As the old saying goes, big things come in small packages. These tiny robots can pack a whole lot of power into their compact frames. They may just be around 2mm long each, but they also cover impressive distances. Just one of these robots can move around 8mm in a single second.

Azadeh Ansari, who worked on the robots at the Georgia Institute of Technology’s School of Electrical and Computer Engineering in her capacity as an assistant professor, had this to say about the inventions.

“We are working to make the technology robust, and we have a lot of potential applications in mind. We are working at the intersection of mechanics, electronics, biology, and physics. It’s a very rich area, and there’s a lot of room for multidisciplinary concepts.”

More information about the micro-bristle-bots, as these devices have been termed, was published in a paper for the Journal of Micromechanics and Microengineering.

How does one go about making a micro-bristle-bot?

With the aid of a 3D printer, an engineering degree and, we assume, superhuman levels of patience and physical dexterity around the fingers. First, the body is 3D-printed and constructed from a polymer, which is constructed from resin.

This requires the use of two-photon polymerization lithography, also known as TPP. The resin is hit by UV light using the 3D printer, and anything unwanted is washed away.

Ansari describes the process as thus:

“It’s writing rather than traditional lithography. You are left with the structure that you write with a laser on the resin material. The process now takes quite a while, so we are looking at ways to scale it up to make hundreds or thousands of micro-bots at a time.”

The robots have four or six legs, depending on what they will be used for. Experiments were conducted to find the ultimate shape and configuration. Once the body has been constructed and finalized, a piezoelectric actuator is affixed using glue.

These actuators make use of lead zirconate titanate or PZT. When electrical volts are applied, the actuator starts to vibrate. The reverse is also true; when the actuator vibrates, it creates a current of voltage. This means that the micro-bristle-bots could be used to power up a sensor.

And how does something so small move?

It’s the control mechanism that is truly revolutionary here. There are no handheld remotes in play here. Instead, the robots respond to unprecedented changes in vibration. This is partly because constructing a robot so small comes with one very obvious problem. There are no batteries microscopic enough to power it.

It’s the aforementioned piezoelectric actuator that generates the vibrations that power the micro-bristle-bot. They pick up on this from a variety of sources. In the science lab, a piezoelectric shaker was used.

However, the robots will also be able to pick up on ultrasound or sonar waves. A particular small acoustic speaker could also be used. Such a device would be no use for anybody listening to a radio, but it works like gangbusters with these tiny devices.

When vibrations are sensed, the spring legs of the robot bounce vertically. This propels the robot forward and helps it cover those impressive distances in short bursts of time. Each micro-bristle-bot can be tailored to a particular response, picking up on a specific set of vibrations or frequency.

The size of the robot’s legs and its overall dimensions of the bot will impact on this too. What’s more, the robots can be sped up or slowed down by simply changing the level of vibration.

“As the micro-bristle-bots move up and down, the vertical motion is translated into a directional movement by optimizing the design of the legs, which look like bristles. The legs of the micro-robot are designed with specific angles that allow them to bend and move in one direction in resonant response to the vibration.”

Steering is achieved by connecting two of the robots together, of different shapes and sizes. These variations mean that the micro-bristle-bots will react to various vibrations and behave accordingly. This is what prevents them from turning in circles time and again. The more variety in frequency and amplitude, the more different controls become available.

What is the next step of this tech revolution?

As we previously mentioned, the endgame could be to use these micro-bristle-bots in the field of medicine. We’re a long way away from this, though. Right now, the team is still experimenting with what may be possible. One thing is sure, though. Ansari is taking inspiration from some of the insect kingdom’s hardest-working critters.

“We can look at the collective behavior of ants, for example, and apply what we learn from them to our little robots. These micro-bristle-bots walk nicely in a laboratory environment, but there is a lot more we will have to do before they can go out into the outside world.”

Right now, while the robots are lab-bound, they have a playground to move around in. Creating robots that can perform more advanced actions, such as swimming or jumping, is next on the agenda.

Magnetism is not something that Ansari and her team are concerned with, though. Even though micro-bristle-bots can join forces to achieve tasks more significant than the sum of their parts, such as lifting heavy objects, it’s impossible to control an individual robot in a swarm using magnetism.