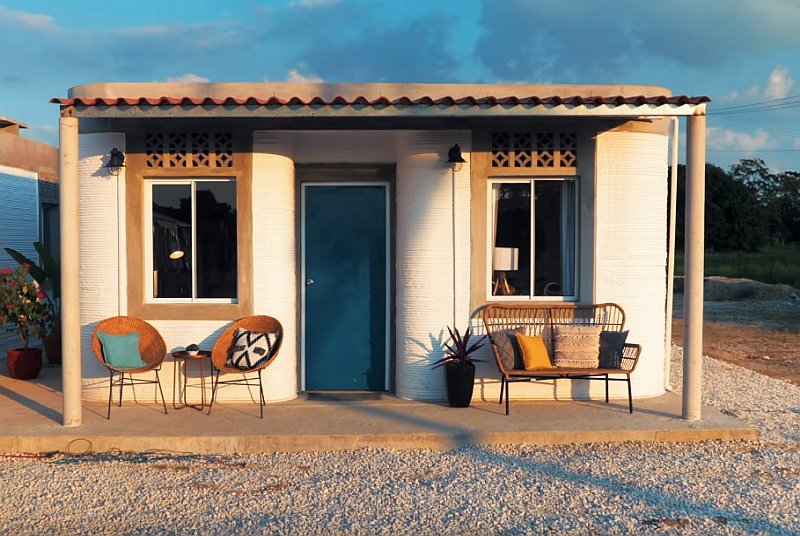 Of all the advances of modern science, 3D printers are among the most impressive. We have long been promised that a 3D printer – coupled with materials, expertise, and a boatload of patience – can create anything.

Some users are happy with a whistle or a plastic toy. Healthcare professionals have taken the idea a step further, constructing surgical transplant materials – including a skull. Now, a nonprofit organization dedicated to helping the poor and needy has 3D-printed an entire neighborhood.

Visit the outskirts of Southern Mexico, and you’ll find an oversized 3D printer. Over thirty feet in length, this marvel belongs to New Story. The charity has used the printer to create houses that measure 500 square feet.

Can people live in these houses?

Yes – that’s the whole point of the endeavor. New Story aims to use 3D-printed homes to solve the global housing crisis for those living in poverty. This is just the first step on a longer journey.

Fifty of the town’s poorest families will initially be moving in and will own their homes outright. Each of the homes will boast two bedrooms, a living room, a kitchen, and a bathroom. Naturally, plumbing and electricity will also be provided. This is a substantial upgrade on the current living arrangements of the town.

Most of the citizens earn just over $75 a month and live in wooden shacks. Outdoor restrooms, no water, and flooding during the rainy season are common. These concerns will become a thing of the past when the homes are complete.

New Story are no strangers to building homes to aid those in need. In nations such as Bolivia, El Salvador, and Haiti – a territory so impoverished that citizens eat mud just to survive –

New Story are not working alone

Naturally, good intentions and honest endeavors only go so far –, especially for a charitable organization. The New Story team are dedicated and talented, but there are limits to what can realistically be achieved single-handedly.

This led New Story to partner with Icon, a Texan company that specializes in construction tech. It was Icon that provided the super-sized 3D printer, dubbed the Vulcan II. While other printers have been designed to build a home, this neighborhood is the first to pull off the ambitious endeavor.

Obviously, the ethical implications of the local economy have also been taken into consideration. New Story and Icon have also teamed up with Echale a Tu Casa, a local nonprofit construction company. This enabled local workers to complete building works beyond the capabilities of 3D printing.

This was not an easy process

As you can probably imagine, the process of building these homes was beset by challenges.

The town that hosts the homes remains unnamed for the privacy of the residents. Another territory was initially chosen, but bureaucratic red tape meant that Plan B was required. The town is also located on an earthquake fault line, ensuring that a wide range of safety tests were needed.

Once the project was signed off and approved, more logistical issues arose. The Vulcan II took three months to clear customs and enter Mexico from its Austin origin, By the time it arrived, construction was delayed by flooding. Mexico’s rainy season is famously problematic.

Eventually, construction was ready to start. This was achieved by applying layers of concrete through the 3D printer. This creates the walls and floors of the home. The quality of the printing needs to be carefully managed and monitored, depending on the weather conditions.

The first two homes were completed simultaneously in 24 hours – albeit with this timeslot spread over several days. This was born of a desire to work during daylight hours. The intention is to speed the process up further in the future.

Eventually, the plan is to expand the reach of 3D homes throughout the globe. A complex of 400 square feet apartments are scheduled for Austin, with the aim of providing accommodation for the city’s homeless population.

New Story seeks to change the entire face of the construction industry. Based on these results in Mexico, the sky is the limit as to what can be achieved.