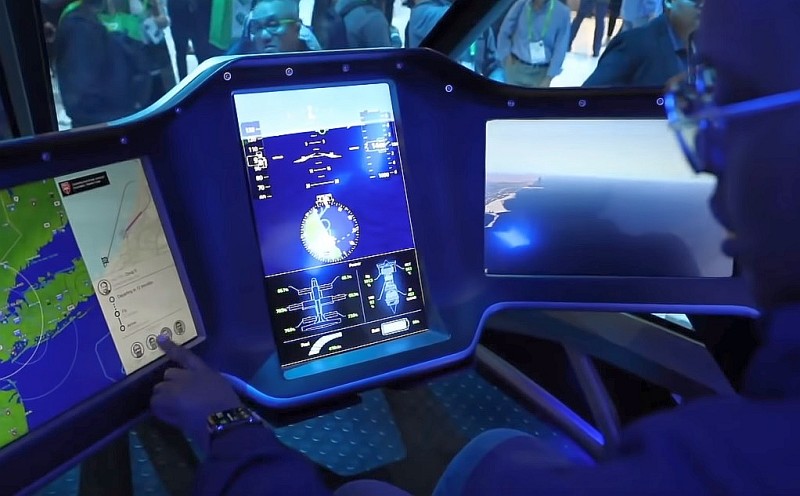 Following the sad death of actor Rutger Hauer, a flock of cult cinema enthusiasts has recently dusted off their copies of dystopian sci-fi classic Blade Runner.

Famously, this genre masterpiece – released in 1982 – was set in 2019, a period that presumably seemed long enough into the future to allow imagination to run wild.

Of all the visions that Blade Runner presented us with, the idea that the skies would be filled with flying cars by 2019. Naturally, a quick glance to the skies reminds is that this isn’t the case.

The concept isn’t as far-fetched as you may believe, though. Uber has unveiled a prototype for an airborne taxi, which will surely change the way we travel.

Uber revealed their plans for a flying ride at the Elevation Summit in Washington DC. The company is adamant that an airborne taxi is the future of the industry, and they plan to get their models operational in all major cities by 2023.

On paper, the idea of sailing through the city skies in an Uber is an appealing one. You’ll be able to take in a bird’s eye view of some of the world’s most unique locations, while also avoiding traffic.

The biggest challenge you’ll have will surely be negotiating a stubborn flock of pigeons. That’s nothing to make light of, though. A single pigeon can display more attitude than a dozen New York taxi drivers.

Also, the summoning of a flying Uber will seemingly not be entirely straightforward. You won’t be able to summon an aerial ride from whichever street corner you’re standing on.

Instead, you’ll request a ground-level ride as always, and ask your driver to take you to the closest air taxi. These locations will be known as vertiports.

Once you arrive, you can head to this vertiport and take your seat in the flying vehicle. Now, interestingly, these flying Ubers will not use drivers. Instead, they’ll be fully automated. How safe depends entirely on your personal level of trust in technology.

We can only assume that Uber knows what they are doing here. The consequences of allowing a half-baked idea fly (no pun intended) would be catastrophic.

Once seated inside the flying Uber, you’ll be transported to another vertiport of your choosing. Again, these will be your only choice of destination. You can’t instruct the ride to drop you off at random.

Once you’ve arrived, you can naturally arrange for another Uber ride to drive you to your next destination. Alternatively, if all that air travel as left you feeling queasy, you may be better served to take a stroll in the fresh air.

Head down under to fly over

Intrigued by the idea of Uber’s airborne adventures and want to become an early adopter. Well, unless you’re based in Dallas or LA, you’ll need to take a long flight before you can take a short-haul trip through skies.

Although plans are also afoot to test rides from JFK airport to downtown Manhattan, Uber plans to roll out their idea in Australia before going global initially.

Melbourne is the company’s city of choice and the first location outside of the USA to trial the technology. Test flights will begin as early as 2020, and Uber predicts great results.

Presently, it takes around an hour to drive from Melbourne’s airport to the city center. With the use of Uber Air, this time could be cut to just ten minutes.

Also, of course, there’s the environmental impact to consider. Australian officials are looking to bolster their nation’s standing on Greenpeace’s ‘Greendex‘ of eco-friendly countries, and Uber Air will help with no end. With fewer cars on the road, CO2 emissions will drastically reduce.

If Uber Air really captures the imagination, fewer and fewer people will own their own car. That’s a global advantage, not just for Aussies.

How is this all possible?

The interior of an Uber Air Taxi will resemble the inside of a helicopter. Each taxi will be able to carry four passengers at a time, with two seated in the front and two behind. Remember, there’s no driver to take up any additional space.

The drone tech will pre-program a flight path that will drive passengers from one location to another. Obviously, only a handful of destinations will be available to start with. The cost may also be initially prohibitive, too.

Expect to pay around $5 per mile when Uber Air first launches. As one of the host cities – LA – this means that you can expect to spend almost a hundred dollars to get from LAX to downtown. That’s a big investment, especially seeing as they can only take 20 minutes if you catch friendly traffic.

As with all things, though, the price will drop over time. It will just become a matter of time. This will rely on early adopters putting their hand in their pocket, though. If the venture turns enough profit to remain sustainable, it will become increasingly commonplace and affordable.

Those that do travel in style with Uber Air will not find themselves stranded at takeoff and landing, though. The assigned vertiports will contain stores, restaurants, and decorative features – as well as charging stations. It will be akin to traveling from an airport, without the long waiting times and a constant barrage of security checks.

Will it really work out?

You’d be forgiven for a cynical approach to Uber Air. There gave been countless similar initiatives in the past, and they haven’t all come to pass. A whole lot of ducks need to be lined up for this to be a real game-changer – and even then, it’s relying on a lot of trust from the public.

Not everybody will happily entrust their life to drone technology, several thousand feet above the ground.

The fact is Uber needs this to work out. The company recently joined the stock exchange and posted an annual loss of around $1billion, in addition to disappointing share sales.

Just like Uber undercut the existing taxi market in most cities, causing a great deal of grumbling and consternation, other rideshare services and crept in taken a chunk of Uber’s customer base. Also, Uber has launched a range of ambitious side projects, such as food delivery service Uber Eats, which have yet to bear any real fruit.

Uber is not alone in experimenting with avian travel, either. The technology has actually existed in the Middle East since 2017, though it is yet to get beyond the testing stage. Larry Page, the founder of Google, has funded a rival project in New Zealand. German start-up Lilium has also launched a five-seat air taxi, and appear set to provide serious competition.

Time will tell if Uber will have a stranglehold on avian taxis in the future. One thing looks increasingly likely, though – the future of short-distance travel does involve looking skyward.

Who knows? We may even find ourselves missing and mourning those frustrating traffic jams in the future. Long delays will soon become a thing of the past.