The Imperial troops employed the AT-AT battle vehicle (All Terrain Armored Transport) throughout the Clone Wars in the Star Wars series. The four-legged mechanical beast was a formidable weapon, but aquarium aficionado Carly Thompson envisions a future in which they’ve been extinguished.

She made a Star Wars-themed aquarium, complete with the remnants of an AT-AT walker swimming among the fish.

Thompson was inspired to create the sci-fi-themed tank after receiving an AT-AT aquarium ornament as a Christmas gift from her brother. She was hesitant to use it at first since she doesn’t generally employ artificial components in her aquariums.

She did, however, decide to try something new. “I knew I wanted it to appear as natural as possible,” Thompson says in an interview with My Modern Met. “From Jedi Fallen Order, I recognized Kashyyk. This, along with the Star Wars movie’s Moon of Endor, served as my inspiration for this tank.”

Thompson spent three days designing and constructing the fish tank. The huge, burly tree trunks were made from cholla, a typical aquarium wood. She then created the mossy jungle look with java moss and a three-leaf seed. After the aquarium was completed, the only thing left to do was choose which fish would reside in the underwater realm.

“It was tough to decide which marine life to house in this aquarium,” Thompson adds. “I picked neon tetras because I felt the bright blue and red would represent a lightsaber while also adding color.”

Thompson, on the other hand, fell in love with ember tetras and chose to keep them in the tank. “I was drawn to these fish by their gorgeous red color and overall feeling of movement in their natural habitat.”

“Then I put five in my tank from my pet store,” she says. “These fish appeared to be highly interested and lively in their aquarium.” 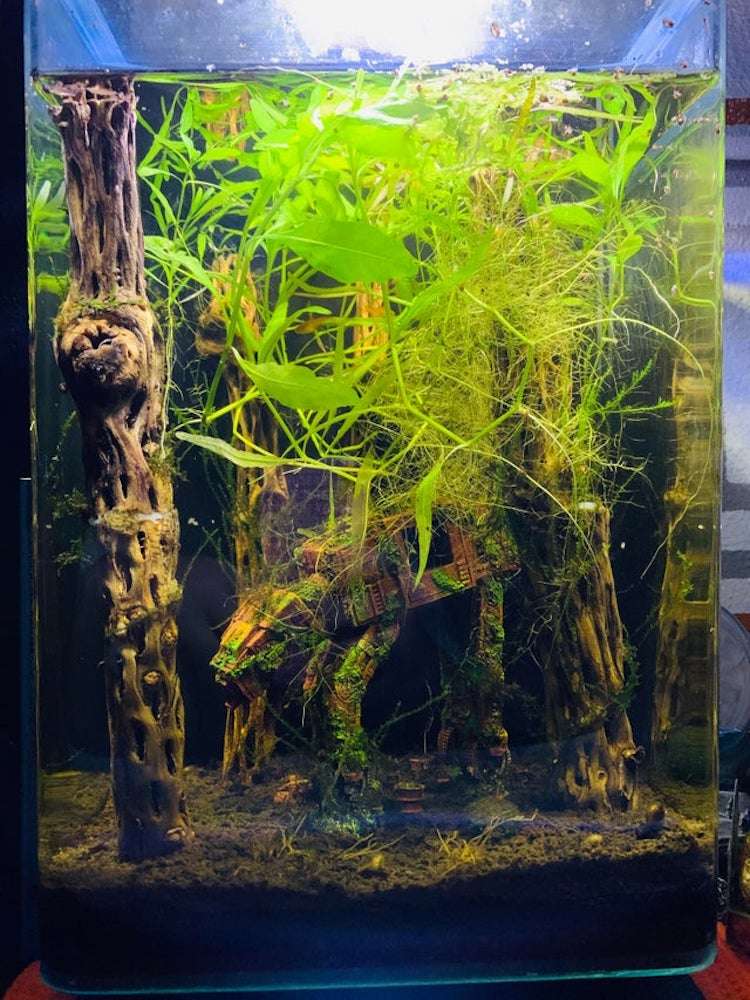 Thompson felt the ember tetras would be happy in her larger, thirty-gallon tank after conducting more studies on the species. She swapped them out with red cherry shrimp and Ramshorn snails, which appear to be prospering in their cosmic forest.

“I genuinely enjoy this tank,” Thompson adds, “and I had no idea so many other people did as well.”