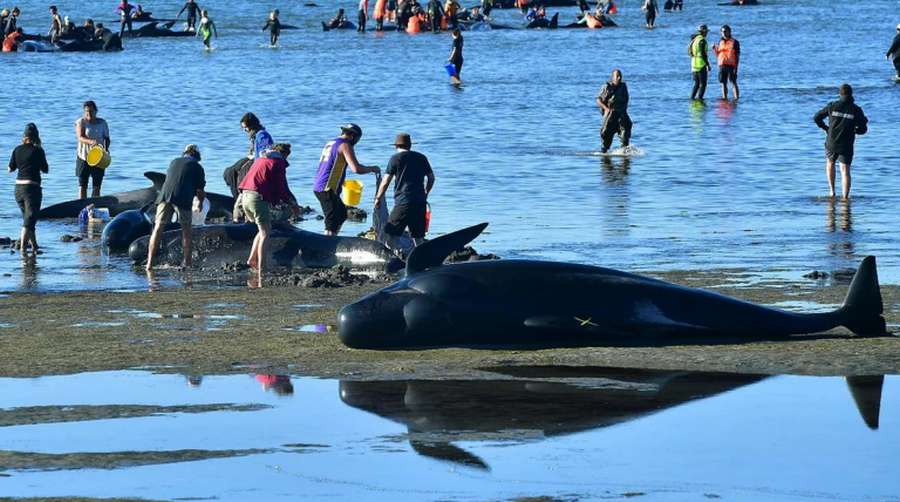 Humans are often so consumed in their own selves that we forget to look out for other species. However some folks in New Zealand have shown what selflessness truly looks like.

About 300 dolphins and whales beach themselves in New Zealand every year. They can get agonized by the naval sonar sound and try to escape the waters.

One such situation was observed recently when a pod of 49 whales rose to the surface of a beach in New Zealand.

Let us learn more about how the situation panned out.

A pod of 49 whales surfaced to the shore of New Zealand’s beach in February. As the situation became intense a group of almost 200 volunteers including environmental activists and animal lovers came together.

How Did The Volunteers Help?

The whales were spread out all across close to the sea shore. Unfortunately nine of them had already died so the volunteers first herded the whales together into a pod.

They were focused on keeping the whales safe outside of the water and guide them back to their natural habitat one by one.

One of the first things that these volunteers ensured was that the whales remained cool. And thus began drenching the suffering creatures with buckets of water to keep them cool despite the sunny weather.

They also made sure that all whales remain upright so that the fins would not be under any pressure and they remain safe.

The volunteers decided to form a human chain so that they could help “re-orientate” the whales. They believed that if the whales were together there would be lesser chances of re-stranding.

Boats were employed to stop the whales from getting back to the shore once the whales were back in the water.

The next morning, the pod of whales once beached itself again however only 28 survived this time. And even their chances of survival did not look great.

According to Andrew Lamason, a ranger with the Department of Conservation; “The whales were quite faint by this point. They were not exactly making an effort to swim back into the water.”

Because of the volunteers who once again formed a human chain. These whales returned to the water by the afternoon.

Once the whales were back into the water volunteers were also pulled out for safety.

Sonar emits a sound that is intolerable for marine mammals. As a result, they swim miles to escape it and end up beaching themselves at times.

The link between naval sonar and whales killing themselves in masses has been studied for years. It is believed that the sonar sound pulses scare whales to death.

New Zealand beaches have faced such situations one too many times. Mass stranding is not uncommon here.

A lot of work needs to be done in this regard to ensure the safety of whales.

Human Urine Is Shown to Be an Effective Agricultural Fertilizer