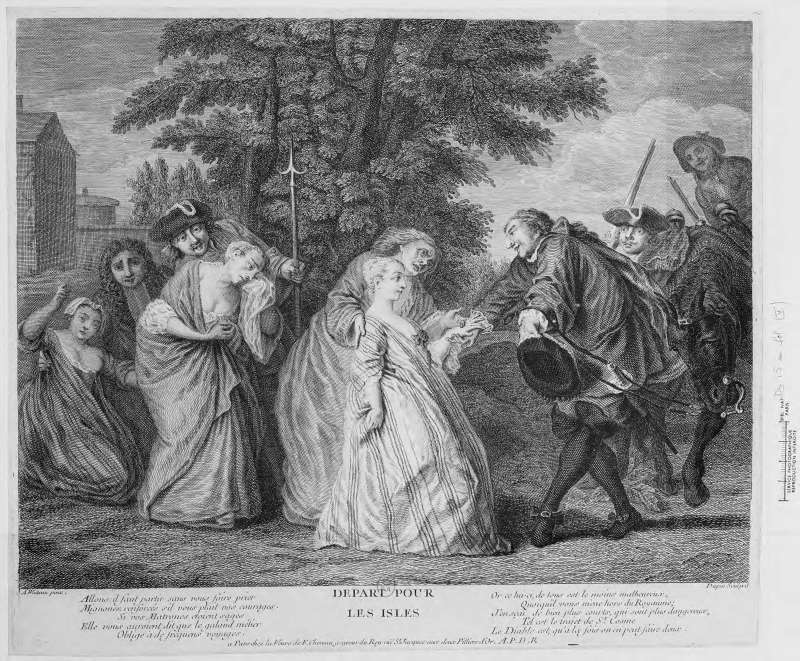 The world is a weird and wonderful place, packed with foreign laws. Even today, citizens of Western Australia are forbidden by law to own more than 110 lbs. of potatoes at any given time. In Switzerland, flushing the toilet after 10 pm is a criminal offense. You’d better keep a calendar if you live in Somalia, too. You risk being hauled up in court if you forget your wife’s birthday.

Some of these laws are child’s play compared to those inflicted upon the citizens of 18th Century France, though. The death penalty was willfully handed down for a range of offenses that would be considered mild misdemeanors in this era.

Even if you avoided the guillotine in favor is jail time, it was considered a stay of execution. While the 18th Century is often held up as a golden age for the French penal system, prisons were deemed to be transient locations. Most of the accused lost their heads before long.

Thankfully for the lawbreakers of the time, there was an alternative option. In 1719, a new decree was passed. If a miscreant promised to marry a prostitute and move to the American colony of Louisiana, any crimes would be pardoned.

This sounds like a good deal for anybody. In truth, however, it wasn’t born purely of altruism on behalf of the French authorities. This decree was considered a way of cleaning up the streets of France so as not to displease the aristocracy, while also populating the near-empty colony of Louisiana.

The price of war

France was in a mess in 1714. For the last thirteen years, the nation had been unsuccessfully fighting in the War of the Spanish Succession. This conflict was spawned by the death of the childless Spanish monarch Charles II. Nature abhors a power vacuum, and a delicate balance of power was left in the ruler’s wake.

Countless countries went to war in the quest to claim Spain for themselves until the Treaty of Utrecht ended the conflict in 1713. Philip V, a member of France’s House of Bourbon, was declared the King of Spain. The war had drained the national coffers though, and the country suffered.

Soldiers returned home to a country they barely recognized and struggled to reintegrate with society. Work was also at a premium, especially as a ruinous winter had left countless farmers unable to cultivate their land.

The upshot was that the streets of France were teeming with beggars, prostitutes, and thieves. The prisons were heaving, and the powers that be were most displeased to be faced with evidence of their folly every time they left their ivory towers.

Louisiana is famous today for the way that it embraces Gallic culture to its heart. The French Quarter of New Orleans is one of the state’s most renowned tourist spots. In the 1700s, however, Louisiana was a barren wasteland. Military personnel posted in the region only survived the winter because a local settlement of Native Americans offered them food and shelter.

France had taken claim of the land in 1699, but the War of Spanish Succession impacted Louisiana as much as France. The authorities promised French citizens that, if they moved, they would live like kings. The idea was that the land was lush and vibrant, acting as nirvana for farmers. Prospectors were also promised that they’d find abundant amounts of gold and silver.

France wanted laborers to work to land, and donate the money to the state to recover from their expensive 13-year conflict. To their surprise, nobody took them up on their offers. This meant that the decision had to be taken out of the people’s hands.

The transportation of French convicts to Louisiana began in 1719. The Royal Policy of France decreed that “We believe that we can do nothing better for the good of our state than to condemn [convicts] to the punishment of being transported to our colonies . . . to serve as laborers.”

This freed up space in the nation’s prison system – but remember, France was hardly flourishing at this stage. For every cell that became available, there would be a military deserter, beggar or somebody found wandering the streets after curfew to replace them. Any pretense of a trial was glossed over. These individuals were packed straight onto a boat and shipped to Louisiana.

This was very much a short-term solution, though. The French were only shipping male prisoners, which meant they’d soon be back to square one. The population of Louisiana needed to grow, so the convicts on the colony needed wives.

On one memorable day in 1719, 184 female prisoners – most of whom were jailed for prostitution – were told they had to choose a male convict as their groom. The happy couples were connected by shackles and forced into a large mass wedding.

This forced colonization became increasingly popular. Citizens would be accosted on the street, and forced to show their proof of employment. If they failed to do so, it would be off to Louisiana with them. Naturally, the people of France began to revolt, and riots broke out.

Jean-Baptiste Bienville, who served as the governor of Louisiana, was not pleased with the arrangement, either. He complained that “it is most disagreeable for an officer in charge of a colony to have nothing more for its defense than a bunch of deserters, contraband salt dealers, and rogues who are always ready not only to desert you but also to turn against you.”

Despite this, Bienville made lemonade from lemons. He founded New Orleans based on these humble beginnings, and the beginning of a new world was born. Not bad for a territory forged from vagabonds and prostitutes who moved in against their will!