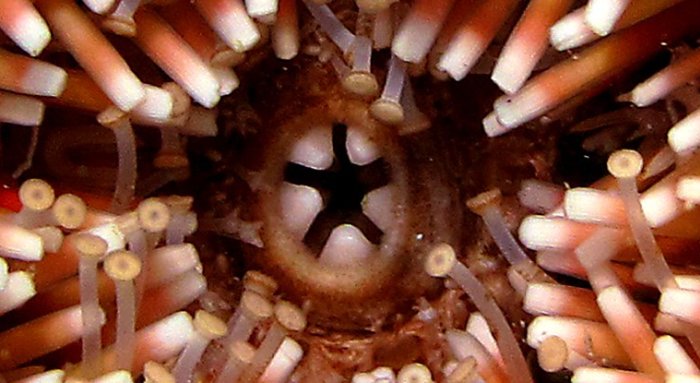 Anybody with an ounce of sense has a healthy respect for the sea. Humans live on land, marine wildlife dwells underwater, and our worlds were never designed to cross. Exploration of the depths of the ocean is best left to marine biologists and similar professionals.

The main reason for this safety. There are creatures under the sea that pack more teeth into their mouth that we ever thought possible. You’d be forgiven for thinking that we’re referring to sharks here. We’re not.

The fact is, there is an animal with a mouthful of razor-sharp teeth living on every seabed in the world. To add to the fun, this creature doesn’t even bare those teeth until necessary, ensuring they could sneak up on you. We’re referring to the humble sea urchin.

Do I need to add sea urchins to my list of animal phobias?

In fairness, you should probably give them a wide berth anyway. Sea urchins are spiky and can cause a painful puncture to the skin if they attack a human. What’s more, a handful of sea urchins breeds are venomous.

One thing that you won’t need to worry about is being bitten, however. Although sea urchins pack a whole bunch of sharp teeth into their tiny bodies, the creatures will not bite a human. In fact, the teeth are not designed for defense at all.

Sea urchins dwell at the very bottom of the ocean, sustaining themselves on sea cucumbers and common algae. Why would they need sharp teeth if they’re dedicated vegetarians?

The fact is, despite their prickly exterior, sea urchins are a prey species. Numerous aquatic animals, including lobsters, otters, and eels, will feast upon sea urchins. To avoid this, the sea urchins bite down on rocks to hold steady at the bottom of the sea.

A sea urchin’s mouth is located at the bottom of the animal’s body. With five strong, sharp, and interlocking teeth in the mouth, they can gain a firm grip at the base of the ocean by biting onto rocks. From there, the urchins can eventually slip into holes and cavities and hide from predators.

Oh, and in case you’re wondering, sea urchins release waste from the top of their head. They basically do everything in reverse. 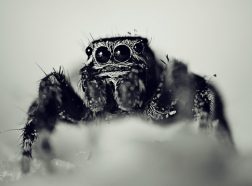 Spiders could eat all the humans on Earth in one year

These must be strong teeth to survive biting into rocks?

Yes, they are. A new study has revealed that a sea urchin’s teeth are not just tough, though. They also constantly sharpen themselves. When a sea urchin bites a solid rock, it’s akin to pushing a kitchen knife blade against a sharpening block.

This is because, unlike human teeth, those of a sea urchin constantly regenerate. As we know, when the enamel coating of a human tooth wears away, it’s gone for good. This causes discoloration and the likelihood of tooth decay and disease. Sea urchins do not have this problem.

The outer coating of a sea urchin’s teeth continually grows. Think of it as being similar to a human fingernail – unless clipped or broken, these teeth just get longer and longer. The lengthier these teeth grow, the more brittle they become. This means that they’ll chip away while the urchin bites on rocks, always leaving new, sharp edges.

This repeats throughout a sea urchin’s lifespan, which is typically as long as 100 years. Many sea urchins live twice as long as this. They’re among the oldest animals on the planet.

This constant replenishing of the animal’s teeth has captured the imagination of scientists. It’s believed that, in studying sea urchins, new advances can be made into the fields of dentistry and artificial teeth.

Sounds good. What else do sea urchins do?

If we’re being honest, not a great deal. One of the reasons that these animals live so long is that they do not over-exert themselves. Most sea urchins will contentedly live out their days hanging out on the ocean floor, eating and watching the world go by.

If you don’t have any reason to handle a sea urchin, leave them be. In addition to the apparent risk of injury, they just don’t like. Handling by humans causes distress to sea urchins, as it leaves them vulnerable to predator attacks.

Despite this, non-poisonous breeds of sea urchins are edible. They are most commonly enjoyed in Japan and Iceland, though seafood restaurants all over the world will serve urchin. Certain territories also consider the eggs of a sea urchin to be a delicacy.

Maybe it’s best to leave these fascinating and beautiful creatures alone, though. It seems that we have plenty to learn from them. Besides, the last thing we need is sea urchins evolving and learning to use those sharp teeth on human infiltrators to their underwater domain.

Read Next How human waste is choking the life from Caribbean Sea...

How animals experience pain could relate to personality, just as in humans

It’s important to understand how an animal is feeling – especially if it’s in pain.

St. Tiggywinkles is the largest animal hospital in Europe.

A lost continent has been discovered, buried beneath Europe

The globe is made up of seven continents. At least, that’s what we’ve always known.

It’s important to understand how an animal is feeling – especially if it’s in pain.
Read More
St. Tiggywinkles is the largest animal hospital in Europe.
Read More
The globe is made up of seven continents. At least, that’s what we’ve always known.
Read More
It’s fascinating – if not a little scary.
Read More
Service dogs are a lifesaver for many former military officers.
Read More
This car takes flowers from her backyard and gives them to neighbors as gifts on a daily basis.
Read More
A Chinese man cloned his dead precious cat, named Garlic, for $30,000.
Read More
This has enhanced our understanding of what happened that infamous day.
Read More
Brazil’s bee population was decimated in just three months early in 2019.
Read More
A world without insects is a fast track to human extinction.
Read More
Just by sheer tonnage of prey consumed, spiders could easily stomach every human on Earth.
Read More
Human impact on the Indonesian rainforest, including forest burning, is critically endangering one of humankind's closest relatives - orangutans.
Read More