What’s the place where all bookworms love hanging out? The library! The smell of new books or even the sight of a bookshop can bring a smile to any booklover’s face.

Let’s find out more about this impressive feat!

It all started when Jan Is De Man got a request from some of his friends to decorate the building where they lived. They wanted him to paint a mural on the side of the building to lift people’s spirits.

So, they suggested something fun and peppy, like a giant smiley face that will undoubtedly make people smile as they pass by. But Jan had other plans. He wanted to make something breathtaking.

After taking a closer look at the building structure and considering the local community’s preferences, he settled on the idea of painting a giant bookshelf on the building’s wall.

He also contacted another fellow artist Deef Feed, who had worked with him in the past, to bring his fantastic idea to life.

Feed loved his idea and was overjoyed at his proposal. Together, these two artistic geniuses worked day and night to complete the spellbinding project in just under a week.

The bookshelf was painted so that it’s an illusion and gives off a 3D effect when you look at it from them aside.

Pedestrians are delighted, and the artists have managed to put a smile on their faces indeed. The artistic feat has become so popular that Utrecht has become a worldwide sensation on short notice.

The Idea Behind It 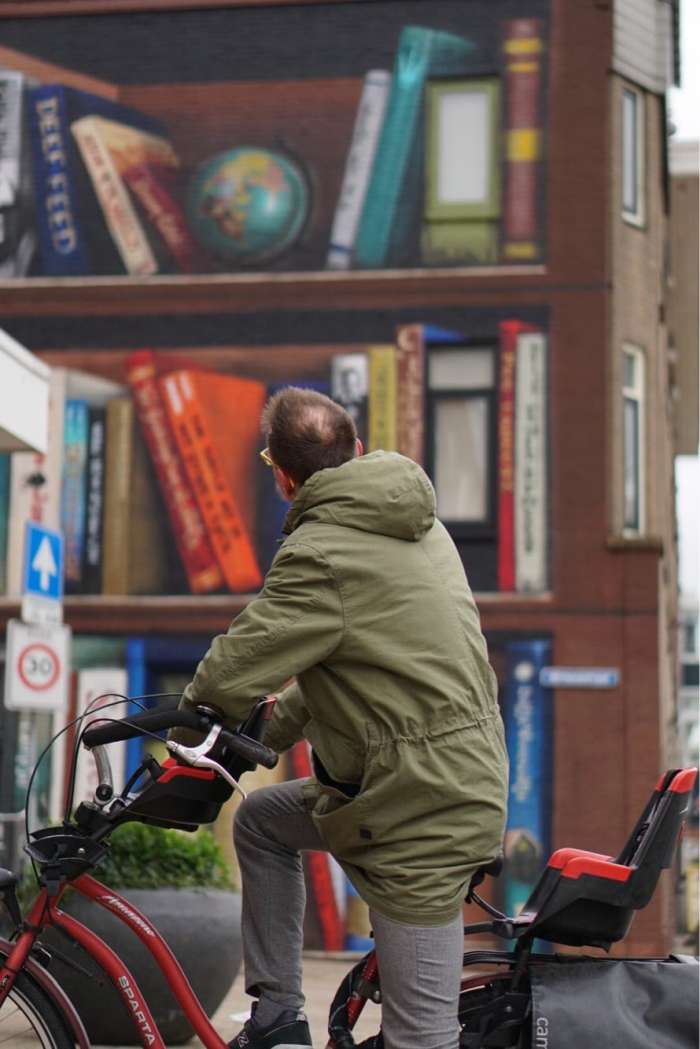 As the city of Utrecht is famous for being culturally diverse and filled with bookworms, Jan Is De Man thought about painting something that will bring together the people and highlight their love for literature. So, they believed that books were the only way to connect with people from various cultures.

The artists asked the locals to suggest to them the books to paint. However, they stated that these books couldn’t be political or religious, as they may divide the population rather than unite them.

After their request, 32 locals themed the book ideas to be painted on this joint bookshelf mural. Sorting through the suggestions, the two artists finalized a list of books that covered eight languages.

And while painting these books, they also placed some smiley faces to keep things lighthearted.

Jan Is De Man and Deef Feed have become so famous after their spectacular artistic feat at Utrecht that they’ve received requests from other countries for redecorating ordinary buildings. So, they’ve displayed their creative genius in the United Kingdom and France too.

And for Utrecht, the people are indeed happier and have become more interested in delving into literature!

The Pope Says His Preferred Medication for Injury is Tequila