A scientist has come up with a design for an engine to save Earth from cosmic disaster by driving the sun through space. 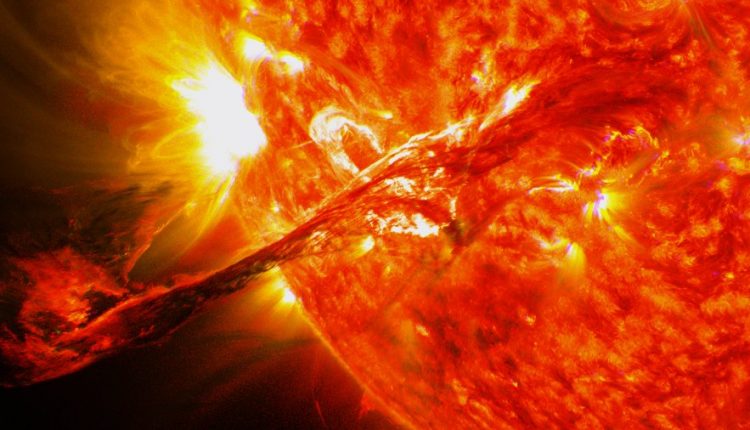 It sounds crazier than even some of the silliest science fiction ideas. Still, Matthew Caplan of Illinois State University has designed a stellar engine, a propulsion unit vast and powerful enough to drive a star and, with it, the contents of the solar system that are trapped in its gravitational pull.

But why? Well, first of all, because Earth is in constant peril. We’ve all seen Armageddon with Bruce Willis. We mostly wish we hadn’t, but we have. We all know about the ever-present danger our humble little planet faces from the kind of planet-killing giant lumps of rock that regularly streak past. It’s been a good 60+ million years since the last one we needed to worry about, but you never know where the next might be the lurking. And what if it were a meteor shower?

A whole field of deadly rocks, completely unavoidable, even with the assistance of spaceships full of macho drilling experts to knock one or two off course. And by the time you see it, it’s almost certainly too late. That’s the people behind YouTube channel Kurzgesagt decided to get their planning for Earth’s defenses in early. Kurzgesagt (meaning ‘in a nutshell’ in German) is an animation studio dedicated to sharing a passion for knowledge and big conceptual ideas. And what is the notion of building an engine that can pilot the Sun through the universe if not a very big idea?

And so Kurzgesagt commissioned Caplan to design just such a device to steer us away from interstellar danger and uploaded the resulting video about the process down below.

The engine would be a gigantic-scaled Dyson sphere, or partial Dyson Swarm, of mirrors used to reflect back the Sun’s energy and whip up some fierce solar winds. These would then be harvested, siphoning off the Sun’s fuel source and separating it into helium and hydrogen to power itself using vast fusion engines.

The Sun would be an ever-present danger for the device which would have to keep itself at a safe distance, managed by firing a constant stream of accelerated hydrogen particles and directed plasma into our star to keep it at bay.

For the actual engine part of the trick, the Sun would be propelled by jets of Oxygen-14 powered by a multi-Bussard ramjet assembly (which would also be responsible for the orbit-stabilizing jets of plasma).

Almost as insane as the very idea itself is the fact that the Caplan engine is nothing new. This is, in fact, a variant on Classes A through C of Stellar engine, a series of thought designs kicked off by an original concept from Soviet scientist Leonid Shkadov in 1987 (his first design, the Class A Stellar Engine, was a kind of solar sail).

Understandably, given the size of the object, this astronomical tug boat would aim to move, the speed on the Caplan engine would not be anything to write home about. A top speed of 50 light-years sounds impressive until you look at the timescale 50 light-years…per million years. Yes, you’re right. That is painfully slow. Also, using the Sun as a fuel source would mean you sooner or later run out of fuel. It doesn’t sound ideal.

But that’s ok because any threat on the scale to require such an absurdly colossal device would also give us plenty of warning too, something of the order of thousands of years from first astronomical viewing, most likely. And Caplan estimates that the fuel would last 100 million years at top speed, and it would only require a piffling 10 million years to avoid any danger.

With such ingenuity at our fingertips, is humanity’s future assured? That rather depends on the feasibility of ever being able to build a megastructure of such, literally, astronomical scale (and you underestimate the size of the Sun at your peril) and also whether other, more Earth-bound, threats might take us out first. But it’s nice to dream, isn’t it? Set the controls for the heart of the Sun!