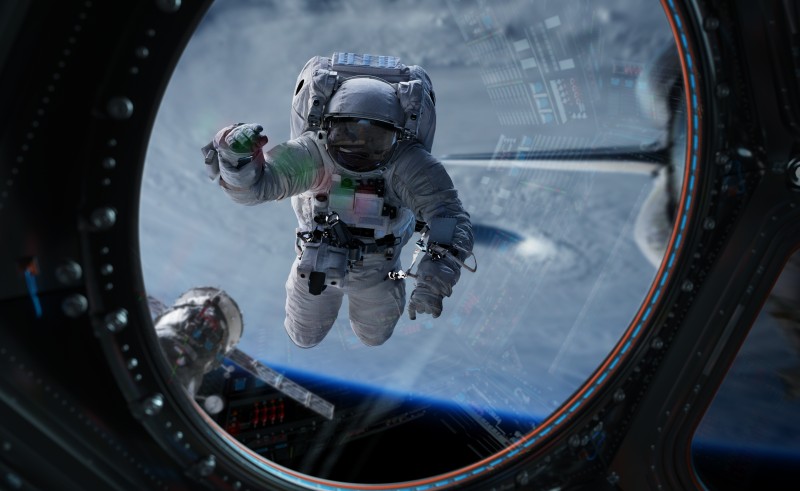 Humans have long been curious, even cautious, about the long-term effects of exposure to the strange conditions that would prevail off Earth. In fiction, we see alien infections (The Quatermass Experiment), mutations through exposure to Gamma rays (the Fantastic Four), and particularly psychological effects in films from Solaris to 2001 A Space Odyssey.

While these fictions remain purely speculative, we do have evidence that time in space can have adverse health effects, muscle wasting being a particular issue in zero gravity conditions.

We also know that a similar deterioration can occur in the bones, a condition dubbed spaceflight osteopenia, and problems have been observed with the condition of astronaut’s gastrointestinal tracts and mental health alike.

Experiments have even been conducted into the conditions of isolation likely to be experienced on prolonged extra-terrestrial jaunts (for instance the four years long Mars-500 project) and astronauts have recently become increasingly willing to open up about the negative impacts of time in space, in terms of depression and loneliness.

But so far, none of these studies have taken into account occurrences at the cellular level of the human body. This is where a group working at the University of Arizona stepped in, in a paper published in the Journal of Applied Physiology.

They focussed their research on the microscopic world of white blood cells, in particular, the NK cells which have a role in both preventing the recurrence of old viruses and, more significantly, killing cancer.

The team extracted their samples from astronauts who had spent 6 months or more in continuous spaceflight, their initial focus being on the cells’ ability to fight cancer. This was due to the underlying cancer risk posed by exposure to radiation that, on Earth, is absorbed or deflected by the atmosphere, or the Earth’s magnetic field, long before it can reach any human being.

The researchers took their samples from astronauts who had served on the International Space Station (ISS), taking blood samples both before the astronauts left Earth and once they returned, as well as requiring them to extract their own samples several times while at the ISS.

These samples were then compared against those of a group of healthy individuals who, like most of us, had remained on Earth that whole time.

What the team found, not just in comparison with the non-spacefaring control group, was striking.

“When we look at the function of the astronaut samples during the flight compared to their own samples before they flew, it goes down,” Professor Richard Simpson, co-author of the paper said, “When we compare them to controls who stayed on Earth, it still goes down.”

In fact, compared to pre-spaceflight levels, the astronauts’ NK cells were up to 50% less capable of fighting leukemia cells after just 90 days in orbit. These falls in effectiveness was also more significant in those astronauts who had never been into orbit before.

“I don’t think there’s any doubt that NK-cell function is decreasing in the spaceflight environment when analyzed in a cell culture system,” Simpson explained, “The next question would be, how do we mitigate these effects? How do we prevent the immune system from declining during space travel? In order to do that, you have first to figure out what’s causing the decline: Is it stress? Is it microgravity? Is it radiation? Is it a plethora of things? When we figure that out, we can try to find ways to directly target those factors and mitigate them.”

But it’s not just the increased risk of cancer that is an issue for astronauts whose NK cells’ effectiveness is being diminished.

The cells are also essential in fighting off dormant viruses that live in our bodies. While not as great a risk to life, they certainly would have an impact on astronauts’ health and happiness, although mission effectiveness, while they’re in space, might not be significantly hampered.

“When you’re in the space station, it’s a very sterile environment,” Simpson points out, “You’re not likely to pick up the flu or a rhinovirus or some community-type infection…But the infections that are a problem are the viruses that are already in your body. These are mostly viruses that cause things like shingles, mononucleosis, or cold sores; they stay in your body for the rest of your life, and they do reactivate when you’re stressed.”

Besides these impacts on their NK cells, their mental health, muscle wasting, and osteopenia, astronauts also face a number of other unusual effects on the brain and body. Brain tissue has been shown to degenerate in space in a similar way to the typical effects of aging, but at a vastly accelerated rate and a slowing of cardiovascular functions can also lead to a range of other issues.

Astronauts have reported, or been observed to suffer, conditions including eyesight impairments, decreased red blood cell count, issues with balance, nasal congestion, changes in fluid distribution that can give their face a puffy appearance, disturbed sleep and even, although perhaps these astronauts were just making excuses for themselves, chronic flatulence.

More recently, NASA conducted a twin study in an effort to focus on the effects of space travel on the human body. In the experiment, one twin spent a year at the ISS (while the non-astronaut sibling remained at home on Earth) and the two were compared, for a range of health outcomes, at the end of the period. Not only did the study show differences, but it even gave evidence for changes to the DNA of the astronaut twin, as well as long-lasting changes to cognition.

Clearly more research remains to be done but, if our future is ‘out there’ we may need to look a little more at our bodies to see the effect that space travel has ‘in here’.