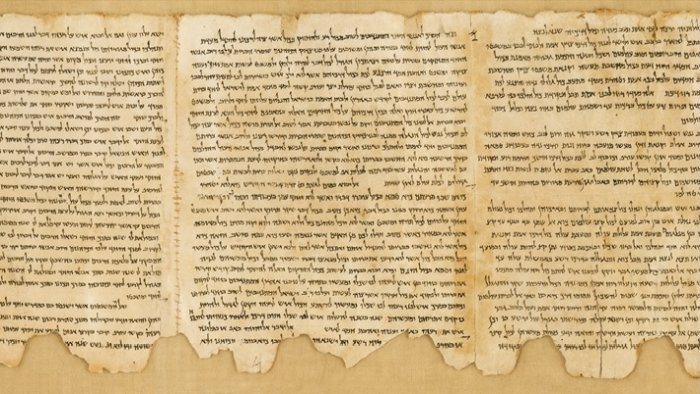 Despite being almost 2,000 years old, the Dead Sea Scrolls remain in excellent condition. The first of the texts was found by a shepherd a little outside Jerusalem in 1947. Containing texts written in Greek, Aramaic, and Hebrew, the scrolls contain elements of the Hebrew Bible.

Many of the scrolls are hugely damaged, as you’d expect with documents of such an age, and have been reproduced so that they can be studied. However, the Temple Scroll, which was found in a cave in 1956, is remarkably well-maintained.

This attracts the interest of scientists, who wonder how such an ancient document could remain in such excellent condition. Despite being damaged by moisture over time, its 8-meter length remains legible to the naked eye. The question is, how?

New evidence suggests that our ancient ancestors had access to more advanced technology than we thought.

How were the Dead Sea Scrolls written?

Typically, a scroll would be crafted from animal flesh. The animal would be skinned, with all traces of fat and fur removed, and the skin left to dry in the sun. It would often be stretched and rubbed with salt. Ink could then be applied to the organic scroll.

The color of a scroll usually indicates where it was created. Scrolls created in the East typically boast a brown, tan shade, while those from the West are generally a paler white.

After careful consideration, it was discovered the Temple Scroll did not meet these criteria. The material used to make the scroll is not untampered animal skin, and the ink appears to be somewhat raised, as though it has not been applied directly to animal flesh. Naturally, this has piqued the curiosity of experts.

An inch of the master scroll was cut off and investigated, using a range of 21st-century tools and technology. The sample was scanned and inspected in minute detail, so that scientists could pick up anything and everything to do with the manufacturing technique. The results suggested that everything we know about the Dead Sea Scrolls is incorrect.

A chemical compound containing calcium, sodium, and sulfur was found on the surface of the scroll. Added before the text was written, this compound provides a protective coat for the scroll and explains why the text does not appear to be written directly onto the animal skin. This is presumably why the scroll remains legible to this day and could also explain the coloring of the scroll.

The Temple Scroll is considerably lighter than most Eastern scrolls, especially those of this ancient era. This newly discovered technique raises further questions. It appears that the Dead Sea Scrolls were not created using traditional Eastern or Western techniques. What’s more, salt traces were found on the scroll – but the salt in question is not found in the Dead Sea.

This suggests that the Temple Scroll could have been written elsewhere. These are questions that merit further investigation. Additional research into the scroll has been promised, as religious scholars and science enthusiasts both search for a satisfying explanation.

Why are these scrolls so important?

The Dead Sea Scrolls are a pivotal element of the Jewish faith. They contain some of the earliest recorded religious writings, which were combined to compile the books of the Hebrew Old Testament. While they do not contain any text that is unavailable elsewhere, the scrolls remain a treasured element of spiritual history.

The most significant and fascinating issue surrounding the scrolls is the fact they remain in such excellent condition. The manuscripts were hidden for centuries, and yet remain legible.

This reassures religious academics that the impact of the meaning of the Old Testament translations has not been lost through the years. In the eyes of the strict followers of Judaism, this ensures that the word of God has not been diluted or paraphrased excessively over time.

If you want to see the scrolls for yourself, get to Washington DC. The Museum of the Bible is home to seventeen fragments of the scrolls – though five have since been announced as suspected forgeries. For a more authentic experience, you’ll need to visit Jerusalem. The Shrine of the Book is host to the world’s largest collection of Dead Sea Scrolls fragments.