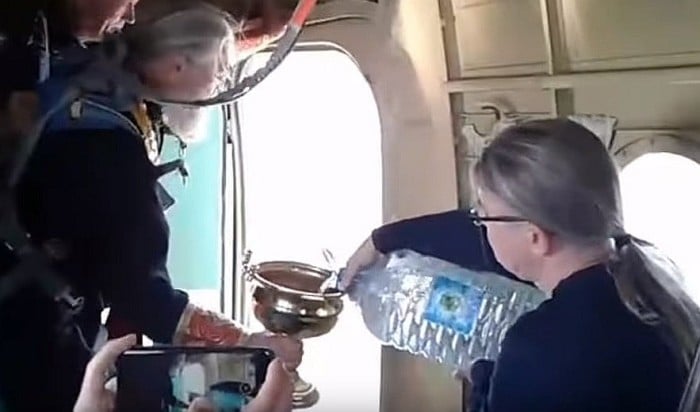 September 11th is a day that lives in infamy in many minds. What is less known, however, is that this date also marks Russian Sobriety Day. Since 1939, this date has been a day of abstinence for some Russian nationals.

For Father Alexander Goryachev and bishop Metropolitan Savva, merely marking a calendar and declining a shot of vodka is insufficient. These two men took their holy crusade to a new level in 2019.

Goryachev and Savva hired a private airplane and flew above the city of Tver. Hovering between 650 and 980 feet above the ground, these men of the cloth blessed some 18 gallons of holy water – and dunked the citizens of the streets below.

For Goryachev and Savva, the plan was to cleanse the city of sin. They were hoping that, in doing this, the people of Tver would cease drinking, consuming recreational drugs, and enjoying casual “cuddle” outside of marriage.

It does, but it was actually an extension of an existing practice. Goryachev has been taking to the skies on Russian Sobriety Day since 2006. It’s only the holy water that was added this year.

Ordinarily, Goryachev wields an icon referred to as the “inexhaustible chalice” and a picture of John the Baptist. The relevance of the latter is tied in with Russian Sobriety Day.

September 11th is the day that Russian Christians mark the beheading of this holy figure, which happened at a feast typified by drunken shenanigans. The Baptist himself was believed to be teetotal, however; hence a day of sobriety in his honor.

Orthodox Christians place a great deal of faith in the inexhaustible chalice. It’s claimed that it can heal alcoholics and drug addicts. Presumably, Goryachev doesn’t loan his to a vodka distillery for the other 364 days of the year.

Naturally, we’re being a little facetious here. That somehow seems like an appropriate response to two men dropping holy water on a city from a rickety old airplane.

Goryachev doesn’t much care for people that do not take his mission seriously, though. He remains adamant that he is doing the lord’s work, and that is nothing to laugh at.

We’re inclined to agree. It’s just that … well, be honest, watch this video from a local news channel and deny that you cracked a smile. It’s admirable work, but it’s also inherently amusing.

So did it actually work?

That depends on who you ask. It’s quite possible that some citizens of Tver will have felt water fall from the sky, assumed it was raining, and took solace in the nearest bar. For others, however, the inexhaustible chalice holds genuine power.

Goryachev claims that people have renounced alcohol at the very sight of his low-flying airplane in the past. In fact, a married couple joined these holy men on their airborne crusade despite being mere civilians. The husband of this union claimed that the chalice cured his alcoholism.

If you’re still questioning the practicality behind all this, you need to take it on faith. Literally. Goryachev believes that addiction is a disease. That’s not particularly controversial. He also claims that this disease is a crisis of spirituality and the soul, however. That’s where he’ll lose some readers.

This is why holy water was brought into proceedings. Ordinarily, Goryachev settles for preaching and spreading the good word. This year, he decided that something with a little more kick was required. And we don’t mean Smirnoff.

It remains to be seen whether Tver has entered a new period of spiritual enlightenment following the actions of Goryachev and Savva. Naturally, if just one person turned their life around on September 11th 2019 as a result of this ‘love bomb,’ it will be a job well done.

One thing remains certain, though. Goryachev will be clambering into his airplane again next year, and the year after. All the remains to be seen is whether he expands his ambition to cover the rest of Russia – and the world.