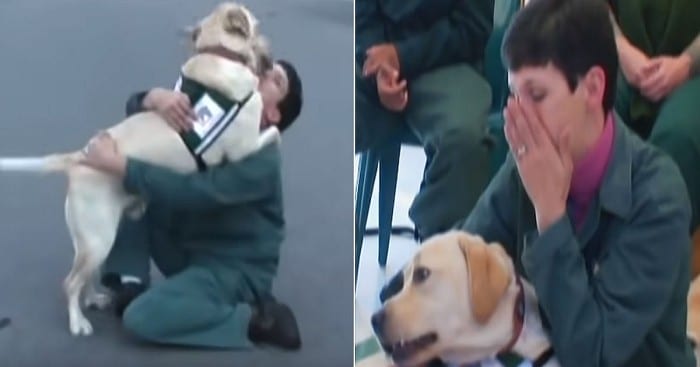 Not everybody is suited to military life. We all owe a debt of gratitude to the brave men and women that place their bodies on the line for us each and every day.

Just as a stint in the military is not for everybody, however, servicemen and women often struggle to adapt to civilian life when their tenure draws to a close. A career in the armed forces is very different from a nine-to-five. A period of adaptation is required.

One way that much former military personnel confronts this is by adopting service animals. Dogs are a common choice, which is hardly surprising. A well-trained dog is loyal to a fault, protective by nature, and makes for great company.

What’s more, dogs live for routine and structure. In this respect, they’re similar to former military personnel. It’s an unfortunate irony that soldiers often struggle to cope with the freedoms afforded by a lifestyle that they fight so hard to protect.

It’s also been proven by science that dog owners experience fewer health complaints and lower risk of stress and heart-related illness. Anybody that returns from a tour of duty with PTSD will find a service dog to be a blessing. This was certainly the case for Sergeant Bill Campbell.

A man and his dog

Sgt. Campbell retired from active service at the age of 49 following a brain injury. He was also diagnosed with PTSD. Several years in the battlefields of the Middle East will do that to you. Sgt. Campbell was so traumatized that he was afraid even to leave his house.

The former soldier was assigned a yellow Labrador by the name of Pax as his service dog, and the two quickly became inseparable. There are few bonds stronger than that of owner and canine, after all.

Pax turned Sgt. Campbell’s life around. It’s a universal truth that dogs need to be walked – and Labradors have plenty of energy to burn. As a result, the former soldier found himself venturing out of the house more and more.

What’s more, Pax understood the situation. He picked up on nervous energy, and always warned his owner of somebody was approaching from behind. Slowly but surely, he began to recover from his traumatic experiences in combat.

Sgt. Campbell was determined to thank whoever had trained Pax, and by extension, changed his entire life. The upbringing and treatment that the dog received ensured that he was in a position to aid somebody that needed him most. When Sgt. Campbell began his search, he was surprised to learn the origins of Pax.

You see, just like Sgt. Campbell, Pax had a previous life before entering the civilian world. Before finding his new home, Pax had lived and worked at the Bedford Hills Correctional Facility.

This wasn’t a pooch prison, with Pax being punished for helping himself to one too many treats when his owner’s backs were turned. Bedford Hills is the only maximum-security women’s prison in New York State. Sgt. Campbell took Pax for a visit to meet the inmates that trained him for an emotional reunion.

Pax recognized Laurie Kellog, the inmate that trained and raised him immediately. He was delighted to see her and expressed this way in the only way that dogs know-how. Licks and nuzzles were bestowed with abandon.

Ms. Kellog opened up to Sgt. Campbell and explained how she and Pax had forged such a bond. She was serving a life sentence for murder, but she was also a PTSD sufferer. In Ms. Kellog’s case, this was sparked by years of domestic abuse.

Pax joined the prison as part of the Puppies Behind Bars program. Along with 26 other inmates, Ms. Kellog trained Pax and turned him into the loving, attentive, and essential companion that he is today.

Pax taught the inmates how to love and trust again. The inmates, meanwhile, trained Pax in how to care for people with complex emotional needs. Ms. Kellog loved Pax so much that she kept his water bowl in her cell as a memento of their cherished time together.

You can watch a video of the reunion below. Just be warned, you’ll need a hanky nearby. This story is the embodiment of the magic of animals. Pax brought together two people with vastly different life experiences that never would have ordinarily crossed paths through a common bond.