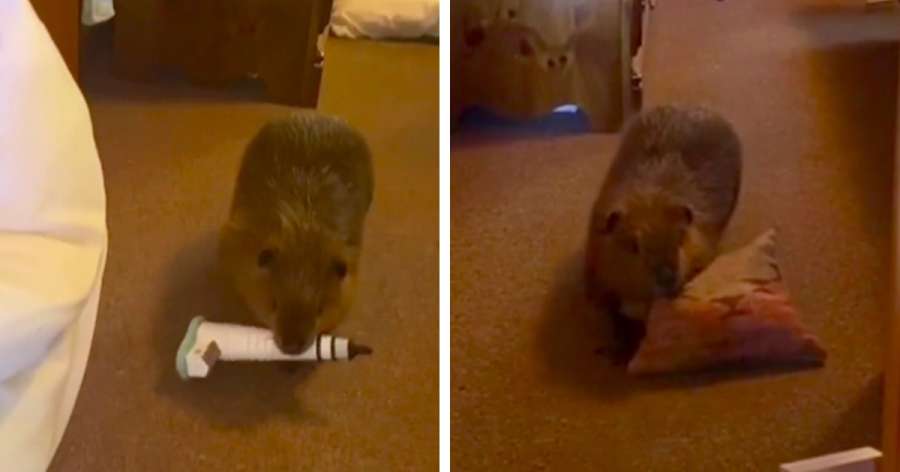 Instinct is a powerful thing, especially prevalent in animals. While it’s theoretically possible to domesticate wildlife, many critters that spend their lives outdoors will always revert to longstanding behaviors. In some cases, that’s dangerous. In others, it’s just too adorable for words.

The case of Beave the rescue beaver falls firmly into the latter category. Beave was discovered on the roadside of upstate New York in the summer of 2020, seemingly alone.

At this point, Beave was estimated to be just three weeks old. As it’s rare – practically unheard of, in fact – for adult beavers to leave their babies, experts assumed that Beave was orphaned. He was not expected to survive long in the wild without parents to protect and guide him.

Thankfully, the good Samaritan that found Beave dropped him to Raising the Wild, a sanctuary and rehabilitation center for hurt and abandoned wildlife. Nancy Coyne, alongside the rest of the team at the rehab center, took it upon themselves to raise Beave as their own.

The center has committed to looking after this latest addition for at least two years. This is how long a wild beaver would traditionally spend learning critical life skills from its parents.

During his time with Raising the Wild, Beave has become a bona fide internet celebrity. TikTok is Beave’s new natural habitat, where he has tens of thousands of adoring followers.

Beave’s adventures are also documented on YouTube. Follow Beave on either of these channels, and you’ll see his favorite hobby – building dams indoors with everyday household items.

There is something undeniably charming about watching an animal embracing its nature, and Beave is no exception. Anything Beave encounters is used to build. This usually happens overnight, leaving the Raising the Wild team plenty of cleaning to tackle in the morning. Not that anybody minds. The dam is invariably dismantled and rebuilt the very next night. These activities keep Beave active and happy in his surroundings.

Eventually, Beave will need to return to the wild. The team at Raising the Wild is preparing him for this in small doses, allowing a little time outside each day, so Beave adjusts to life without humans.

Eventually, a new instinct will kick in for Beave – to find a mate and start a family of his own. By this point, he will be ready for life in the wild. We like to think that he will never forget his human friends’ role in his upbringing, though.