Sure, dogs are man’s best friends. But you know who else they are best friends with? Chowder!

Chowder is a Vietnamese pot-bellied pig who is six years old and lives in South Carolina in his human – Shelby Madere’s house. However, do you know who else lives with him? His dog crew of five! 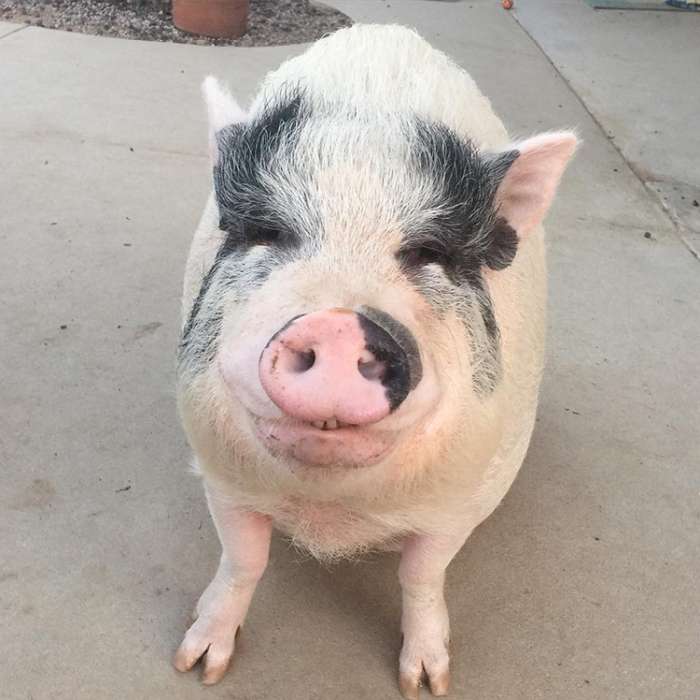 Chowder and His Crew 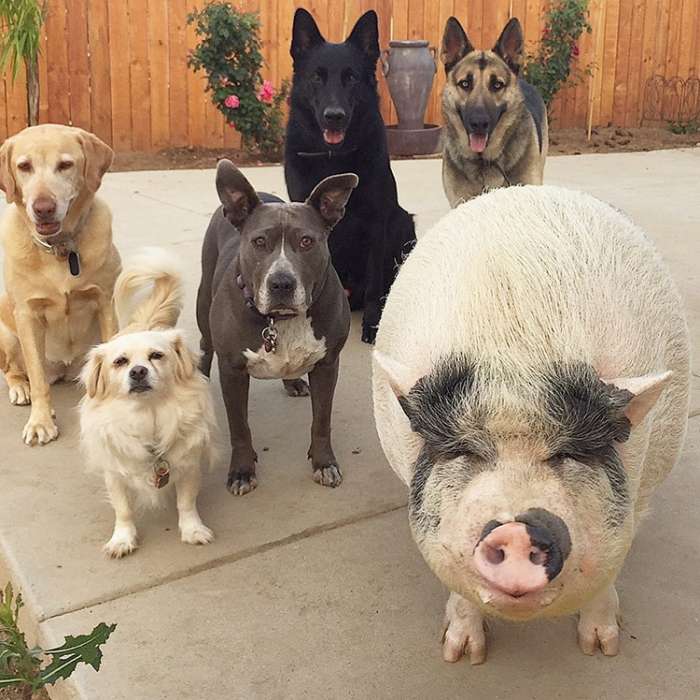 Chowder lives with several animals under the care of Shelby Madere. However, since his piglet-hood days, he mostly grew up with his rescue canine buddies, Bashe, Nya, Rika, 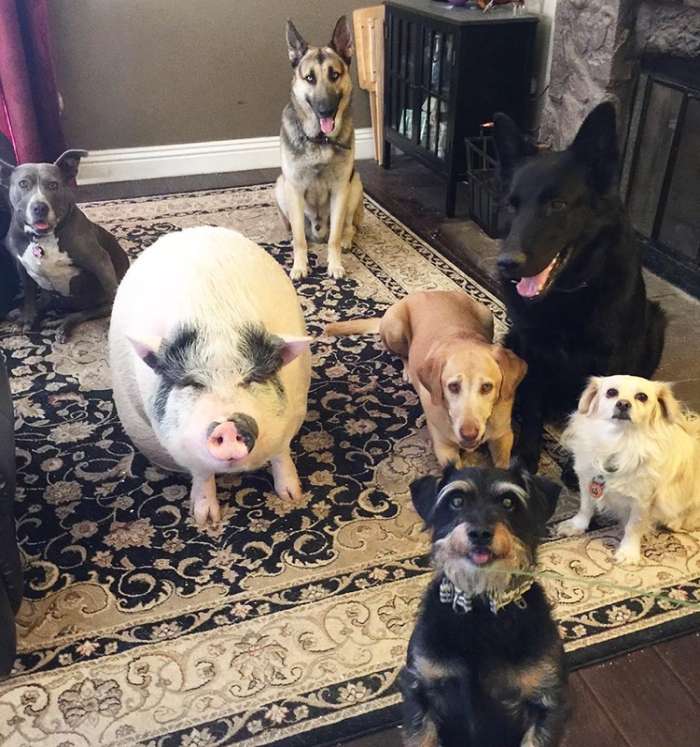 Pigs are naturally intelligent and social. Therefore, when Chowder was growing up with his buddies, he adapted canine behavior as well. Resultantly, he grew up finding himself a part of the canine group and is now more dog-like than pig-like.

Like his crew, Chowder loves to cuddle more than anything. He also likes to fetch and have a good time outdoors with the other pets in the household.

Chowder and his buddies play the same games with matching collars and fit in the same backyard. His has to be custom-made for his larger size, though. Neither he nor his furry friends allow their differences to come in the way of having a good time. 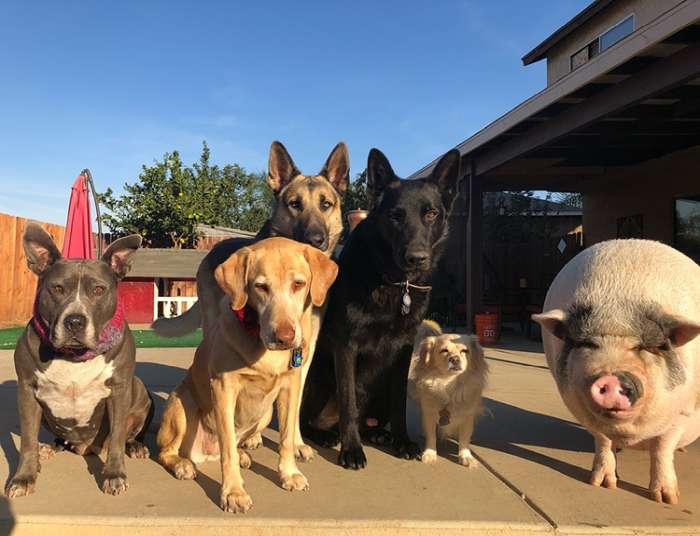 Chowder Thinks He is a Dog

Shelby found Chowder on Craigslist and brought him home to five rescue dogs to give him the life he deserved. However, little did she know that she was raising a pig to act like a dog. 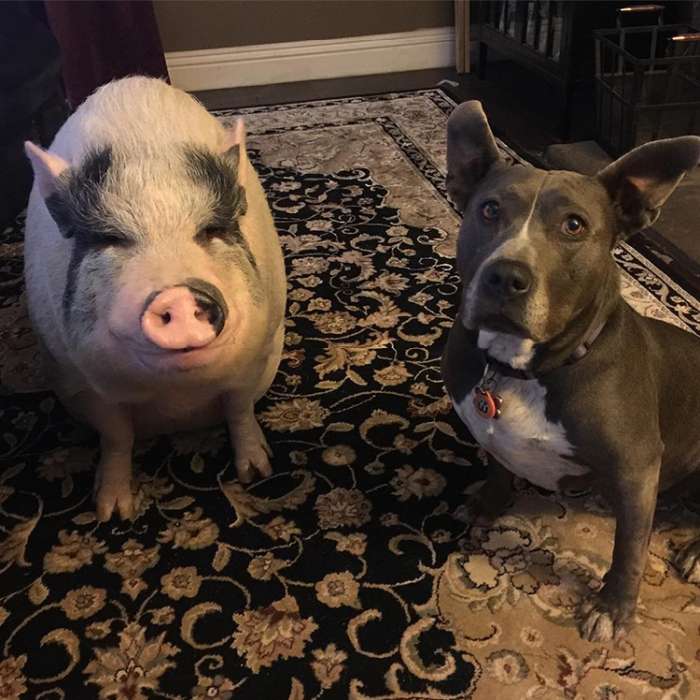 Just like his furry friends, Chowder likes to oink at people from their door. He also likes to play fetch – well, as much as he can – with his buddies and needs as much attention as them as well.

He is a very sensitive pig who likes cuddles and needs to be patient with and devoted to. He is smart and also picks up commands and tricks as efficiently as his canine siblings! 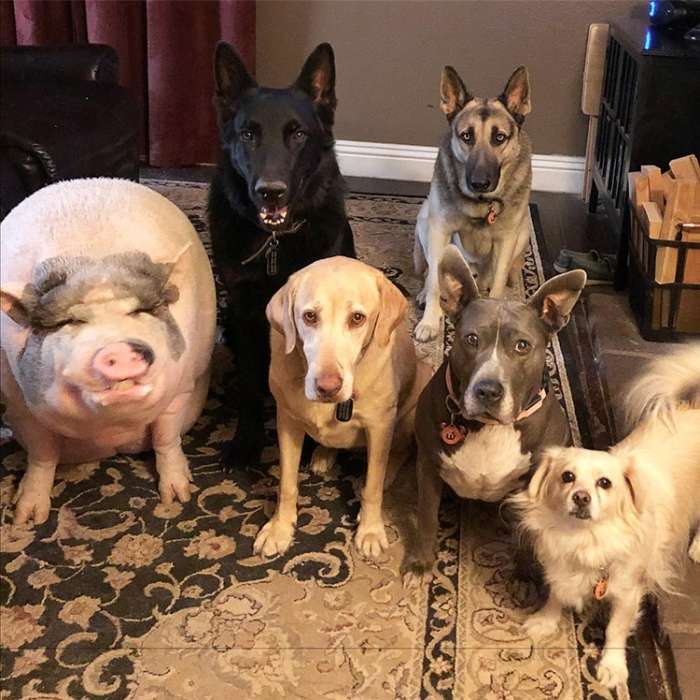 Shelby Madere loves nothing more than animals and taking care of them.

Chowder and his fantastic five are not the only animals in the house.

Their house has another pig, some donkeys, horses, and chickens as well. However, Chowder is the one who gained the most attention on the Internet due to his amiable and funny personality.

All these animals live a complete farm life where their owner treasures nothing more than their happiness and good health. Her Instagram account by the handle @piggypoo_and_crew is a testimony to that love in her. You’ll see some spectacular pictures and videos of the gang on her account!

Animals bring a lot of joy to most people. Species such as pigs and dogs are highly adaptable, social and learn their surroundings’ behavior very quickly. This is why Chowder, who grew up with five rescue dogs and a human, acts more like a dog than a pig.

See Chowder and his friends’ adventures on the gram to fill your day with wholesomeness!

Chimpanzees and Gorillas Are Going to War and Here’s Why

These Ants Can Smell Cancer Better Than Dogs