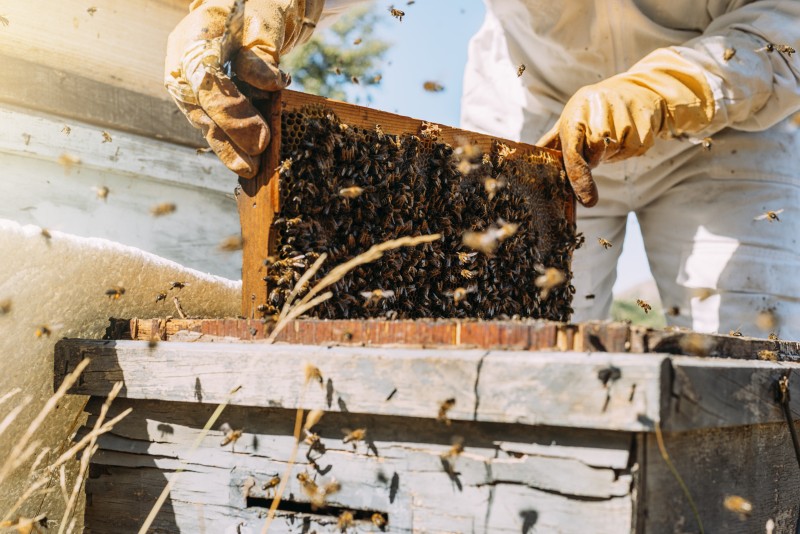 The United States is at war. This time, however, the opponent isn’t an international regime, and the nation isn’t even pretending to fight for truth, justice, and the American way. It’s the country’s native insect population that’s under siege, with experts describing declining populations of honeybees and butterflies as an apocalypse.

According to a study published in PLOS One, America’s agricultural landscape is becoming increasingly hostile to insects. In fact, it’s estimated that in the last quarter of a century, it has become almost fifty times more toxic than it once was. This means that it’s no wonder that populations of insects are declining.

That’s a shame and all … but insects are gross, so I won’t shed any tears

We’ll be the first to admit that insects of any variety are not as fluffy as dogs, cats, rabbits, or whatever domestic pet may tickle your pickle. Despite this, they are critical to the environmental landscape.

First and foremost, bees and butterflies are responsible for around a third of all pollination of the nation’s food crops. This means that the livelihood of farmers throughout the country is reliant on these bugs doing what comes naturally to them. If there are no bees and butterflies to perform these tasks, we’ll all go hungry.

Let’s try to imagine a world without bees. Firstly, that means no honey. Breakfast foods would immediately become considerably less appealing. More importantly, we’d lose all the plants and crops that are pollinated by these busy, buzzing little critters.

This means that the world would lose a substantial food source of grains, fruit, and vegetables. It’s not just vegans that would suffer, either – carnivores would go hungry in short order, too.

Animals rely upon the plant life that’s cultivated by bees to survive. By removing their food source, countless species of animals would start to die out at a rate of knots. Indeed, the avian population of the US is already dropping along with the drop in the insect population.

All birds need to eat insects at some stage, and they are struggling to find an appropriate food source. Countless species of birds are edging closer and closer to the endangered species list.

So, without bees, we lose birds, land animals, and grain. That leaves the human race reliant on cannibalism to survive. That doesn’t sound appealing to us. If you have been eyeing up the idea of turning your neighbor into a fillet steak, turn yourself in to the police for everybody’s safety. You won’t be in jail for long.

It’s estimated that, if bees and butterflies were to be declared extinct, the human race would follow in a matter of months.

Ok, you’ve convinced me. What is causing this population decline?

In a word, pesticides. In another – longer – word, neonicotinoids. These are pesticides that contain neonics, which are being liberally applied to agricultural land all over the country.

Unfortunately, neonics are extremely dangerous to honeybees in particular.

It’s claimed that their toxicity outweighs that of DDT by a thousand. DDT, for those who are not aware, was a pesticide that spawned the classic environmental fable Silent Spring.

Neonics are being blamed for some 92% of all toxicity of bees in the United States. The consumption of neonics can be fatal for some 1,000 days after application, which means that our insect population is in near-constant danger.

It’s not just bees that are at risk, either. Researchers use the toxicity to honeybees as a yardstick for measuring the danger of pesticides, as they are the species most at risk. It’s believed that if a substance is toxic to bees, however, no other insect stands a chance.

What are neonics, and why are we using them?

Neonics are a pesticide sprayed on some 140 different forms of crops. They are used all over the world to control insect populations, not just in the USA. This no doubt means that other nations have also taken notice of the decline in insect populations, though, at the time of writing, neonics remain legal and in regular use.

While some degree of population control is required to prevent insects from devouring crops and leaving a landscape barren, the use of neonics is akin to cracking a walnut with a sledgehammer.

Once an insect consumes this toxin, its entire nervous system comes under attack. Their nerves become overstimulated before the insect is paralyzed and dies. It’s not a fun way to go.

Once the neonics are sprayed over plants, they are absorbed in their entirety. Every part of the plant will contain neonics, and the plant will remain toxic 24/7. Even dead leaves will remain dangerous to insects. Unfortunately, just 5% of the spray actually makes it onto the plant.

The rest will seep into the soil and dissolve in water. That means that any kind of rainfall can see neonic contaminate water supplies, including streams and ponds. Fish, it seems, is next on this chemical’s hit list.

Even if bees survive the ingestion of neonics, they will not be the same afterward. Many bees are rendered infertile after consuming the toxin and become considerably more susceptible to other diseases. Besides, the damage to the nervous system can leave a bee unable to navigate and fly straight.

Neonics have been harming the bee population for quite some time, but it’s only recently that scientific studies have made this clear. The use of neonics has coincided with beekeepers noting a steep and steady decline in the size of their hives.

The devastation may be slightly overstated. It takes a brave soul with plenty of time on their hands – and an impressive immunity to stings – to sit and individually count every single bee that crawls on a hive and update records.

The flipside of this is that it’s equally like the damage is being under-represented. This is a genuine and present danger to our bee population, and it must be taken seriously.

But inevitably the farming industry will struggle without pesticides?

Not at all. Kendra Klein, who holds the position of senior staff scientist at Friends of the Earth, is quoted as saying, “We don’t need neonics. We have four decades of research and evidence that agro-ecological farming methods can grow our food without decimating pollinators.”

The evidence that Ms. Klein refers to can be studied in this paper, published by South Dakota State University. The study claims that farms that do not use pesticides experienced less pressure from insects and turned higher profits.

This suggests that the approach of the farming industry needs to change – and fast. The use of neonics, coupled with the destruction of natural insect habitats and climate change, means that up to 40% of all insect species could be rendered extinct. That’s according to a study published in Biological Conservation.

The EPA disagrees, claiming that neonics are safer than many older pesticides. They appear to be in the minority, though. Canada and the EU have both banned their use. For the sake of the planet – and all the living beings upon it, including humans – we can only hope that the USA will shortly follow suit.