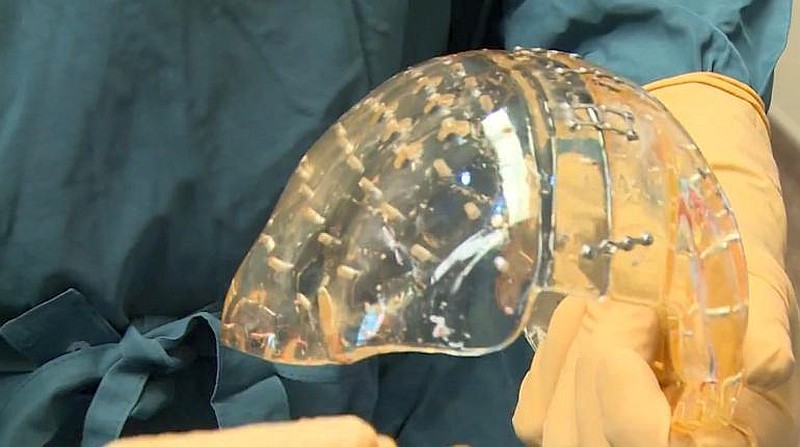 Neurosurgeons have implanted a skull transplant made by a 3D printer

3D printing has been connected to medicine for a while, and now it’s been used for a successful skull transplant.
Share
Tweet
Pin it

3D printers are fascinating technology. We can use these devices to make all manner of weird and beautiful things, from musical instruments to clothing – and even a functional automobile, if you have the know-how and suitable advanced machinery.

Some people have also taken to 3D printing food, in an attempt at creating an environmentally friendly and sustainable way to live.

Arguably the biggest excitement surrounding 3D printing is in the field of medicine, however. Human organs that are suitable for transplant have been created using 3D printers, saving lives in the process. Scientists have taken these developments to the next level.

In the Netherlands, a woman living with a rare bone disorder long endured pain due to an increased thickness to her skull. This skeletal issue was causing the chronic patient headaches and was slowly but steadily rendering her blind.

Even worse, however, the condition could have turned fatal if not treated. The patient’s brain would have been unable to function appropriately, and brain death would have followed.

This is where 3D printing came in. A replica of the patient’s skull was rendered, identical in every way but one; the dimensions were appropriate, and thus would cease her symptoms.

Throughout an operation that lasted 23 hours, the patient underwent a full transplant. Her body accepted the new skull, and she is now able to live a whole life unblighted by pain and impending early demise.

For the uninitiated, 3D printing is essentially the creation of solid objects using technology. A model for the desired object is made on a computer, going into as much detail as is possible. This is known as Computer-Aided Design or CAD.

From there, the CAD is sent to the 3D printer, which then builds the item over time. It’s a time-consuming process, as it needs to occur one layer a time. It’s a whole lot faster than outsourcing work, though.

Most often, a 3D printer will use plastic. Plastic is eminently moldable, and it’s a comparatively cheap raw material. Unfortunately, as we all know, it’s also hazardous to the environment. As a rule, we’re trying to use less plastic rather than more.

As a result, some users prefer to make use of ceramic or metal in their 3D printers. In some cases, however – including the skull transplant that we’re discussing here – plastic is the only way to go.

Outside of medicine, countless industries use 3D printers as a matter of course. Engineers, for example, can toy with a variety of ideas and designs. If they use a 3D printer to bring these to life, an engineer will know if they work.

Likewise, a 3D printer can be used for spare parts and repairs. In addition to this, just about any action figure or other plastic toys that you buy for your kids will have been created on a 3D printer.

If you’re intrigued by the art of 3D printers, consumer models are comparatively inexpensive. You should be able to find a desktop 3D printer for as little as $200, though expect to pay around $700 for a quality model. A high-end printer used by a business is likelier to run well into five or six-figure sums.

And this technology can really be used in medicine?

Yes, the medical field has whole-heartedly embraced the 3D printing revolution. There are four primary purposes of 3D printing for doctors.

Printing of Organs for Transplant. As discussed, surgeons can use 3D printers to create exact replicas of living tissue and even human organs. Obviously, these are not created from plastic or metal.

Instead, the medical staff uses a device known as a bioprinter. They apply living tissue, referred to as bio-ink, to this device. This can create replica organs, and be used for skin grafts in burn victims. This is widely considered to be a cheaper and faster alternative to organ transplants, and could eventually make waiting lists a thing of the past.

Surgery Prep and Practice. With the aid of a 3D printer, an exact replica of a patient’s organ can be created. This provides surgical teams with an opportunity to experiment and practice any procedures before scrubbing up and entering the operating theater.

In reality, surgeons only get one chance to perform an operation correctly, and there’s no margin for error. If they can practice beforehand, they’ll walk in with much greater confidence in their eventual success.

Printing of Surgical Instruments. They say that a bad workman always blames his tools, but a surgeon is forced to rely on precise instruments while operating. If these are not fit for purpose, the results could be catastrophic.

With the aid of 3D printing, very precise tools can be created to cover every eventuality. Not only is 3D printing cheaper than ordering in tools from a wholesaler, but the specifications can be tailored to a surgeon’s needs. This means that scalpels could be made smaller for precision cuts, for example.

Prosthetic Limbs. Last but not least, we have the humble prosthetic limb. Wooden legs and hooks for hands are very much a thing of the past. With the aid of a 3D printer, prosthetics are becoming increasingly lifelike and easily accessible.

3D printing is also a cost-effective solution to prosthetic limbs. This will appeal to parents of children, as any growth spurt will render a previous prosthetic to be wholly redundant.

Tell me more about this skull transplant

The average human skull should measure 1.5cm in thickness. The skull of this particular patient was closer to 5cm – hence her discomfort and danger. A replacement skull of the correct dimensions was created from durable plastic using a 3D printer. Then came the hard part – the actual operation.

The University Medical Centre Utrecht played a host of the procedure, with the surgical team led by Dr. Bon Verweij. There was no time to waste, but equally, there were no options until now. Aged just 22, the patient’s life was in danger. The top of her skull was carved away and removed, and replaced with a plastic alternative.

Happily, the procedure was a success. This is the first time that such a statement could be applied to a skull transplant. Since her discharge, the patient is now completely devoid of pain and has regained full use of her eyesight. Also, she bears no visible signs of the surgery. The patient has happily returned to work and is living a whole life.

The only question that remains is whether this plastic skull substitute will last for the remainder of the patient’s life. Dr. Verweij is unable to answer this, so a wait-and-see approach is required.

However, now that the floodgates are open, an increasing number of surgeons will seemingly be happy to take on such procedures. The work of this team could revolutionize the approach to treating head and brain trauma in accident victims in the future.