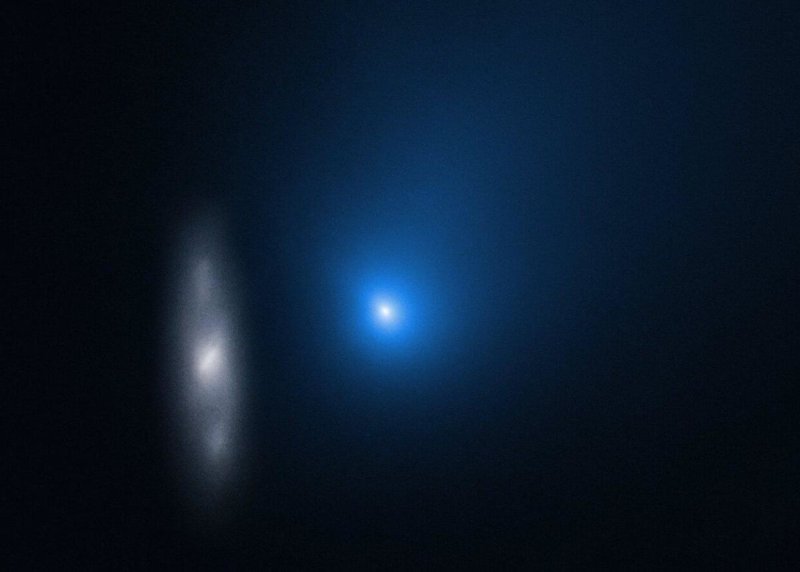 Interstellar objects entering the solar system are a bit like buses, you wait centuries for one to turn up and then two come (in astronomical terms) more or less at once. This second object (following on the heels of ‘Oumuamua seen back in 2017) first turned up on NASA’s radar back in August but has now come within camera range for a decent snapshot. And boy, is it a beauty.

The interstellar comet, 2I/Borisov, as it’s rather unromantically known (the I stands for ‘interstellar’) has now been snapped by the Hubble Space Telescope, at the comparatively close proximity of 300 million kilometers, and the images are far sharper than the earlier fuzzy, blurry shots taken in November. Now we can more clearly make out details of size and shape and learn how much earlier observations got wrong.

For instance, initial observations overestimated the size of the comet’s nucleus, its central, solid core. This now looks to be just a half a kilometer across, about one-fifteenth the estimates made on first viewing. In fact, early estimates suggested that the area around the nucleus, the coma and tail, were 14 times the size of the Earth.

The coma surrounding 2/I Borisov is made up frozen dust and gases, thawed out by proximity to the heat of the sun, with estimates suggesting that this process began back in June as the comet came within four to five astronomical units (the standard measure of space distance based on Earth’s distance from the sun) from our own particular star. From the size of the coma, Borisov may be losing 2kg of dust and 60kg of water to it every second. And that’s quite a lot of dust and water, especially for what turns out to be so small an object.

Knowing the exact size of this interstellar comet will help astrophysicists to estimate just how many such objects might be populating our solar system and the wider Milky Way. However, the solar system that Borisov claims as its own original home remains a mystery.

2/I Borisov initially entered our solar system from the direction of the constellation of Cassiopeia and is on a huge, elliptical orbit that is barely dented by the gravity of the sun that has every other object in the vicinity firmly in its grasp. This is partly due to Borisov’s sheer speed, which also testifies to its extra-solar origins, currently, at a blistering 32 kilometers per second, nearly twice the speed at which the man-made extra-solar traveler Voyager 1 is cruising at, in a bid to get out into the wider universe.

Most comets come from the freezing outer edges of the solar system, still beholden to the sun’s gravity even at that distance, so interstellar visitors are big news. But there is a chance that this may be 2/I Borisov’s final visit. The comet’s trajectory will take it to within 2au of the sun, a range at which many other comets perish, an outcome partly depending on the size of their nucleus, with some scientists estimating a 10% chance that this may be Borisov’s fate.

It is also one of an extraordinary eight comets to have been discovered by Crimean ‘amateur’ astronomer Gennadiy Borisov, this one spotted first back in August.

But are interstellar objects really more like buses than we think? Have two turned up in just the last two years out of dumb luck or is the trick to seeing comets, like catching buses, all about waiting in the right place for when they come by? Hopefully observing 2/I Borisov will help us determine if this is a sheer fluke, or if there are far more such objects regularly visited the solar system than we had previously realized.

But for now, the best plan is to keep watching the journey of plucky little 2/I Borisov, keep snapping photos and learning what we can of it, and keep our fingers crossed that getting within 2au of our own sun, an alien to this interstellar traveler, will not be the end of it.