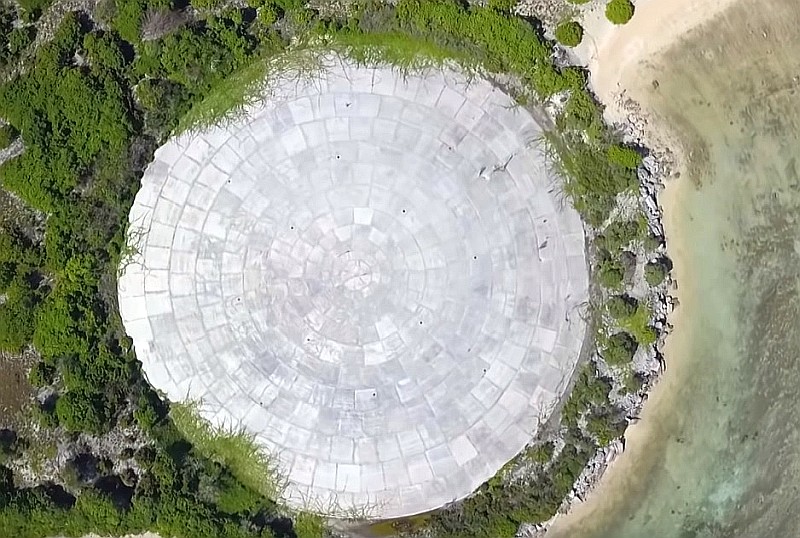 The potency and the pervading threat of nuclear bombs have been ever-present for decades now. Few territories are aware of the devastation the bombs have caused to the Pacific, although the position that the Marshall Islands are now facing is a good reminder of the huge impact.

Located in Oceania, the Marshall Islands were formerly owned by the United States until the territory gained independence in 1986. This would ordinarily be a reason to celebrate, but it meant the islands took on a burden they were not able to manage. You see, the Marshall Islands were the location of some of the American government’s post-WW2 nuclear testing. While that may seem like a long time ago, the impact is still being felt today.

In fact, according to Proceedings from the National Academy of Sciences of the USA, certain parts of this small, unassuming territory still have radiation readouts that dwarf even those found at Chernobyl. Admittedly, it’s just a matter of time before action is taken.

We’re getting a little ahead of ourselves here, though. Before reaching the potentially dangerous epilogue of this story, we need to first set the scene. Just how did this small, unassuming island end up being such a potential disaster zone?

As discussed previously, the Marshall Islands were formerly owned by the United States, but they had already passed through many different owners before then.

Although the islands have played host to an indigenous population since time immemorial, Spain was the first foreign land to claim ownership and was officially recognized as such in the 19th Century. By 1885, however, ownership had been transferred to Germany.

Then came World War 2. Germany permitted the Japanese military to assume control of the Marshall Islands, but the US armed forces stormed the beaches and claimed the territory in 1944, declaring it to be American soil. The islands then obtained independence in 1979 and received recognition as the Republic of the Marshall Islands in the 1980s, although they have been self-governed since 1979.

If you are wondering what this history lesson has to do with the dangerous levels of radiation found there, well, that all stems from the territory’s time under US ownership.

The American government used the Marshall Islands as a nuclear testing site for their atomic bombs between 1946 and 1958. The most explosive of the bombs dropped on Bikini Atoll in 1954; an experiment that changed the complexion of this territory forever.

When asked to name the most devastating example of a nuclear bomb in US history, most people would immediately think of Hiroshima.

The truth is, the test explosion that took place in Bikini Atoll is believed to be thousand times more explosive. This was a complete miscalculation by the US military, who had no idea that their weapon was so potent.

The citizens of Bikini Atoll were naturally transported out of the territory before the bomb was dropped. Testing had begun sometime before, and by 1946, the land was considered to be uninhabited. All this devastation had a lasting impact. By the time the bomb in question detonated –in what became known as the Castle Bravo test – nobody within 7,000 miles was deemed safe. The massive blast radius was twice as big as anticipated.

As you can imagine, there were consequences. The National Cancer Institute estimates that as many as 1.6% cancer diagnoses of Marshallians born between 1948 and 1970 were directly attributable to the Castle Bravo test. The issues didn’t stop here, either.

American scientists declared Bikini Atoll to be safe for repopulation in the early 1970s. This turned out to be far from true; by 1978, the residents were once again being evacuated, as it was revealed that food grown in the territory was tainted by radioactivity. The impacted families were to receive $2billion in compensation, but at the time of writing, the sum had yet to be paid.

If you think that’s the end of the story, think again. Believe it or not, this story has yet another revelation that promises to have severe long-term repercussions.

Further tests took place in the 1950s, with the Cactus Test of Runit Island having arguably the most prolonged impact. While this test was comparatively small, and nowhere near the size of Castle Bravo, it gave the US authorities an idea.

Nuclear waste was transported to the blast radius left by the Cactus test and a domed roof was placed over the top of the area. This was a quick and easy way to contain the damage caused by nuclear testing and secure the area.

Recently described as a “kind of nuclear coffin” by Antonio Guterres (who, for the uninitiated, is Secretary-General of the UN), this dome was supposed to be a temporary measure. Its construction took some three years, and cost over $200m – in addition to the lives of six workers.

The nuclear dome (or coffin, depending on your terminology of choice) was only ever supposed to be a temporary measure and fell by the wayside when the Marshall Islands became independent.

When the US relinquished their claims to the Islands, part of the agreement was that they washed their hands of all responsibility for the nuclear testing – both in the past and in the future.

The Marshallian authorities agreed to this, but there are now growing fears that the ‘nuclear coffin’ is leaking. Ultimately, the construct is a mere 18 inches thick. With sea tides rising more and more every year, cracks have started to appear.

If the radioactive contents of the dome – which include more than 3.1 million cubic feet of radioactive soil, debris, and plutonium – ever escaped, life on the Marshall Islands would never be the same again. In fact, the islands might just be extinguished altogether.

If this sounds like scaremongering, we can only apologize. The fact remains, however, that this is a frightening situation. The Marshall Islands authorities do not have the financial ability or knowledge required to resolve this impending crisis, and local people are enduring a level of uncertainty that is akin to living on top of a volcano.

It’s believed that the dome is already leaking, though this is yet to result in health issues for the local population. This cannot be sustainable, though. Something must be done. Perhaps the authorities can follow the lead of Hiroshima or Chernobyl and plant sunflowers, which can absorb some of the toxicity.

A more permanent solution is undoubtedly required though, and with a little luck, one will soon present itself. It’s a big and beautiful world out there. If the Marshall Islands suffered further irreparable damage, it would leave an ugly scar on history that would never truly heal.