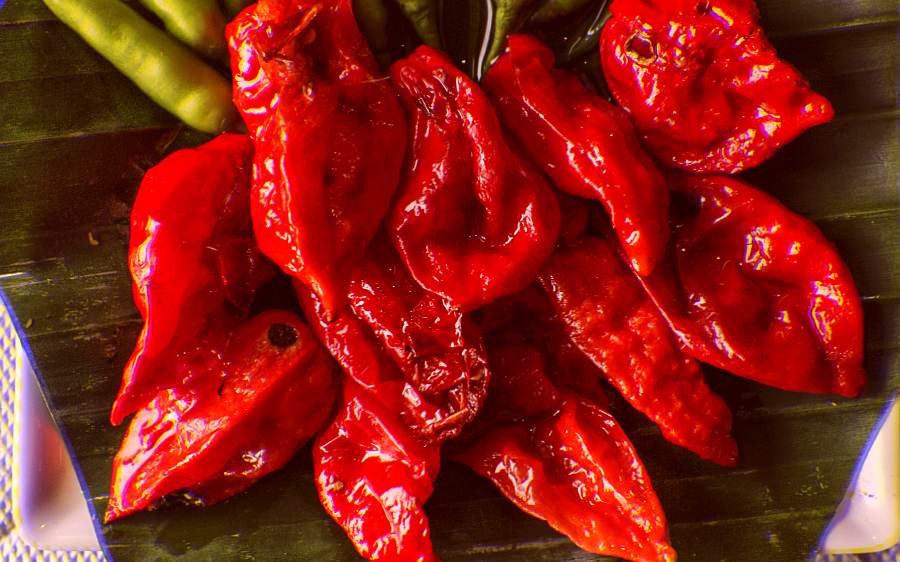 Competitive eating is becoming increasingly popular as a spectator sport. When it comes to people forcing hot and spicy foods down their throat, this is presumably due to schadenfreude. We live in challenging times, and, for some people, nothing is more enjoyable than watching the contortions of pain inflicted by scorching foodstuffs.

If you’re planning on giving this a whirl, learn a painful lesson taught to an unnamed 47-year-old American. This hungry thrillseeker took part in a unique eating challenge that left him with an inch-wide rupture in his esophagus. The culprit? The bhut jolokia, also known as the ghost pepper.

If you’re not familiar with the heat of chili peppers, allow us to introduce the Scoville scale. Named after Wilbur Scoville, the American pharmacist that invented the system in 1912, the Scoville scale measures the heat and spiciness of chilis and peppers. A Jalapeno pepper, which many of us consider being plenty spicy, registers 3,500 on the gauge. The ghost pepper? That tips the scales at 1 million.

So, you probably think that you’d approach such an ingredient with caution. Such whimsy flies in the face of the competitive eating spirit, though. Our culinary gladiator opted to devour many ghost peppers, puréed on top of a burger. If nothing else, you have to admire the determination. He was unaware that the Indian army loads bhut jolokia peppers into hand grenades as a non-lethal riot control weapon.

What happened next will hardly be a surprise. Simply reaching for a glass of water and fanning his mouth was far from sufficient. Not long after basking in adulation for his fortitude, the man began retching. Next came vomiting – and it wasn’t because the burger was undercooked. Before long, he was rushed to the ER with significant pain in the abdomen and chest.

Scans revealed that the man had suffered a case of Boerhaave syndrome – a sudden esophageal rupture. He also suffered from a collapsed left lung and fluid collection below the thorax. We’re willing to wager that his pride was pretty damaged, too. This was hardly the victory lap he was expecting.

Emergency surgery was required, and thankfully his life was saved. That’s more than can be said for many people that experience Boerhaave syndrome. He was fed through a tube for 14 days in the hospital, and was eventually discharged after three weeks – albeit with a gastric tube. No more eating contests for this guy. He’ll be sucking his food through a straw for the foreseeable future.

Believe it or not, the ghost pepper isn’t even the hottest chili in the world – at least not anymore. While the bhut jolokia held the crown when it was created in 2007, these days, it only just scrapes into the top five.

At the time of writing, the hottest chili in the world is the Carolina Reaper, which boasts a score of 2.2 million on the Scoville scale. Try that if you dare. Maybe avoid mashing it up with a burger, though. It will not end well, and the emergency services are already busy enough.