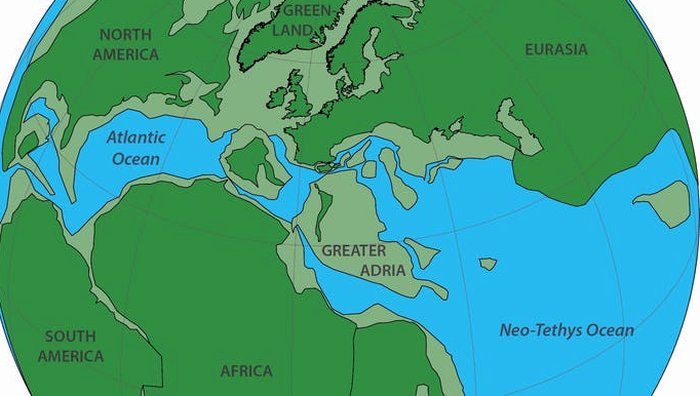 In a world of opinions, it’s always reassuring to rely on cold, hard facts. Some matters are beyond dispute, such as the fact that the world is divided into seven continents.

This was not always the case, however. An eighth continent, measuring around 840,000 square miles, has been discovered beneath Europe.

It’s claimed that this landmass was pushed into this location over a hundred million years ago. For comparison, that was long before the dinosaurs were wiped out.

How could an entire continent go unnoticed for so long?

That’s a fair question. To answer it, we need to delve into history.

Around 200 million years ago, there was just one ‘supercontinent’ in the world. This was known as Pangea.

Over time, Pangea began to break apart thanks to pressure and movement from tectonic plates beneath the Earth’s surface. This created two new territories. Laurasia, which we now know as the Northern Hemisphere, and Gondwana, aka the southern hemisphere.

Gondwana was comprised of what would become Australasia, Africa, Antarctica, and South America. At the time, however, there was a fifth continent amid the landmass. This has been dubbed Greater Adria by the scientists that discovered it.

Greater Adria is believed to have been roughly the size of Greenland. This is not actually as big as Greenland looks on a map. Due to design complexities, this island is typically represented as the same size as Africa when, in reality, it’s around fourteen times smaller. All the same, it’s large enough to be worthy of noting.

The fate of Greater Adria has been revealed in a recent study. It appears that the continent was half-submerged in water from its genesis. This allowed the continent to move with the oceans.

Over time, the continent began to collide with the land of southern Europe, and the top layer was peeled away. It didn’t take long for Greater Adria to begin sinking thousands of kilometers under sea level. It disappeared beneath Europe, and thus never made it onto a map or globe until now.

However, remnants of this lost eighth continent still remains. It’s believed that mountain ranges such as the Swiss Alps, the Himalayas, the Zagros mountains, and the Apennines were once part of Greater Adria. Even major overground European territories, including Venice and the Istrian peninsula, started out as part of this lost continent.

How was Greater Adria discovered?

The discovery of Greater Adria was no overnight coincidence. It was a result of research that lasted over ten years. Geologists are constantly undertaking such work in the hope of discovering new mineral deposits.

A team of scientists spent this period of time researching the movement of underground tectonic plates across Western Asia, Northern Africa, and Europe. With sufficient skill, knowledge, and determination, geologists can use this data to track movements in the Earth’s magnetic field over millions of years.

Punching this data into a computer and creating a simulation, researchers learned that Greater Adria started out as an extension of Africa. Over the course of around 100 million years, it edged its way toward Europe. Eventually, the continent broke away from the Iberian Peninsula and met its final fate.

Could this happen again? Will other continents break away?

What goes around, comes around. Eventually, as tectonic plates continue to collide, continents will break apart once again. It’s believed that the continents of the world will eventually unite again, forging a supercontinent has been dubbed Pangaea Proxima.

The good/bad news, depending on your perspective, is that none of us will be around to see this. The drastic shift is currently expected to happen some 250 million years from now.

The explanation is an anticipated shrinking of the Atlantic Ocean. Right now, this ocean widens around an inch per year. This is due to the undersea tectonic plates spreading.

Over time, however, it’s assumed that the Atlantic will shrink. This will force continents to collide and eventually merge. It’s believed that Africa, Asia, and Australasia will become one within the next 100 million years. As the lands clash, new mountain ranges will form.

Eventually, the last vestiges of the Atlantic will disappear. This will merge Europe, Antarctica, and the Americas with the existing amalgamation of Africa, Asia, and Australasia. Pangaea Proxima will be born.

Of course, these beliefs are all based around science as we know it. Climate change, and the impact that has on our oceans may yet change everything. As the discovery of Greater Adria confirms, everything we know about the natural world can change without warning.

All we can do is watch and observe with fascination, as yet more secrets of the world around us reveal themselves.