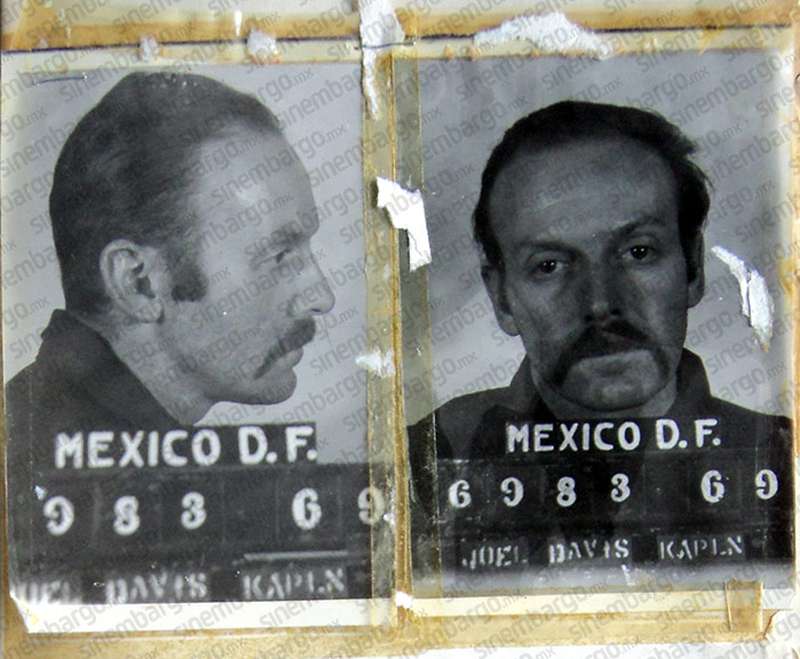 Prison escape stories are often fascinating. Maybe it’s because we’re race is conditioned to find the dark side of human nature compelling. Perhaps it’s just because they’re rarely straightforward, and everybody loves an underdog story.

Regardless of what actions landed an individual in the prison system, there’s often much to begrudgingly admire about one man or woman beating ‘the system.’

When Joel Kaplan escaped a Mexican jail in 1971, he took a different tack. Kaplan did not spend years plotting an elaborate getaway, digging holes underground, and enlisting the help of a team of cohorts. Joel Kaplan escaped prison without breaking a single law. You have to admit, that shows a unique spirit of ingenuity.

Who was Joel Kaplan?

Joel David Kaplan answers questions of reporters in 1962 after his arrest in Mexico City.

On paper, Joel Kaplan was a successful and respectable businessman. Born and raised in New York, he was the heir to a family fortune, and life looked rosy. Things took a turn when Kaplan was convicted of murder in Mexico City in 1962.

The victim was Kaplan’s business partner, Luis Vidal Jr. At least, this remains the party line.  Kaplan was adamant that the body used to file charges against him was not that of Vidal.

Kaplan claimed that Vidal was involved in several criminal enterprises, including the smuggling of drugs and weapons, and arranged to disappear to avoid the law – leaving Kaplan to carry the can for a murder he did not commit.

Despite Kaplan’s claims of innocence, he was tried and found guilty of Vidal’s murder. While he avoided the death penalty, he was sentenced to jail time in the notorious Santa Martha Acatitla correctional facility, which was considered the most secure prison in Mexico.

Despite his wealth – and the alleged corruption of the officials at the jail – Kaplan couldn’t bribe his way out of his sentence.

Of course, desperate men will resort to drastic actions. Kaplan was determined to break out of the prison and launched many unsuccessful escape attempts.

At one stage, he cooked up a conspiracy that involved the pretense of ill health. Kaplan studied the symptoms of appendicitis and faked an attack. He bribed an ambulance driver to drive him to the local hospital.

The plan was for actors to stage a kidnapping, pretending to force the driver to hand Kaplan over at gunpoint. Kaplan would then be driven across the border to his native America. Unfortunately for the convict, the ambulance driver was fired before the plot could be put into action after turning up to work drunk.

This was just one of many unsuccessful plots that Kaplan attempted. Every time, his intentions were foiled, and he wasted thousands of dollars in bribes that came to nothing. Eventually, he hit upon an idea that enabled him to leave the prison without breaking a single law.

On August 18th, 1971, a screening of the movie The Altar of Blood took place in Santa Martha Acatitla. This kind of luxury was rare. Every inmate but Kaplan and his cellmate, convicted fraudster Carlos Antonio Contreras Castro, were occupied watching the movie.

Perhaps more critically, so were all the guards on duty. The aspiring escapees, meanwhile, were patrolling the prison’s exercise yard.

Kaplan and Castro had arranged for a helicopter to land in the exercise, as mentioned above, yard during the screening. This was designed to confuse the authorities at the prison, as no inmate had ever been so audacious as to attempt an escape in such a fashion. Perhaps most importantly, Kaplan legally purchased and registered the helicopter.

Initially, the guards assumed that the helicopter belonged to the Attorney General. They thought that the Mexican authorities were launching a surprise visit and inspection. This meant that, rather than shooting down, the guards saluted the helicopter as it landed.

The pilot, a Vietnam veteran, named Roger Hershner, told Kaplan and Castro they had ten seconds to get into the helicopter before it would take off again. This meant that they would have time to fly out of rifle range before anybody realized what was afoot. Once in the air, Kaplan and Castro were transferred to a private airplane. Again, Hershner piloted this, and yet it was purchased legally.

Kaplan and Castro managed to get aboard the helicopter and were flown to the Mexican-US border in Texas. By the time the guards of the prison realized that something was amiss, it was too late. Upon arrival, they crossed the border using their real names. As they did not attempt to defraud the immigration authorities, no law was broken here either.

Joel Kaplan was back on American soil without contradicting a single law. He had not bribed or assaulted any correctional officers or damaged the prison in any way. Jailbreaks are legal in Mexico if these protocols are observed.

He had legally purchased the vehicles used in his escape, and Hershner complied with all FAA regulations while in the air. He had used his real name when crossing the border, so he could not be accused of fraud. Joel Kaplan was in the clear.

Did Kaplan get away with it?

The Mexican authorities asked the US to launch a chase for Kaplan but never started the extradition process themselves. This is presumably because Kaplan had broken no laws during his escape, and they were concerned about the embarrassment his antics would cause them.

As a result, Joel Kaplan never returned to jail. He did, however, retire from public life and lived out the rest of his days in complete privacy. He died in 1988.

Every guard employed by Santa Martha Acatitla was arrested and interrogated by police. It became clear, however, that none of them were compliant in Kaplan’s escape.

Kaplan’s escapades were chronicled in a book, The 10-Second Jailbreak, which Kaplan cooperated with. The escape also inspired the 1975 movie Breakout, which naturally dramatized the escape with considerably more gunfire and explosions than actually took place. Roger Hershner later claimed that he was more frightened while watching the movie than he was during the escape.

The case of Joel Kaplan’s escape from prison remains unique, and will likely never be repeated. It’s possible that Kaplan was a murderer, and thus deserves no admiration. If his claims of innocence were valid, however, it’s impossible not to tip a hat to his ingenuity.