There’s no doubting that the harpy eagle is a stunning bird, with its expressive face, feather collar, and black and grey tones. If its unusual look isn’t enough to wow, its height and wingspan are.

These enormous birds of prey may grow to a height of 3 feet 5 inches and a wingspan of up to 7 feet 4 inches, giving them the look of a Jim Henson Labyrinth puppet. The harpy eagle is a famous icon on the internet due to its extraordinary size and distinctive look.

Photographs of the massive eagle are frequently shared on Reddit, where people marvel at its size. A female bald eagle may weigh up to 12 pounds, whereas a female harpy eagle can weigh between 13 and 20 pounds. 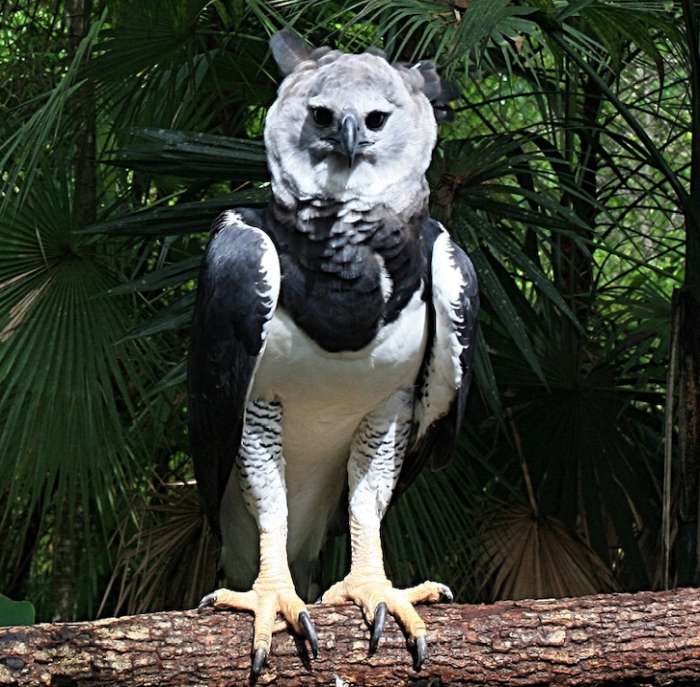 An adult male harpy eagle will weigh between 9 and 13 pounds, which is due to the fact that female eagles are always stockier than adult male eagles. Despite its total size, its wingspan is slightly lower than that of other eagles, which is related to its habitat.

These uncommon birds can be found in the high canopy of tropical lowland rainforests stretching from Mexico through Brazil and northern Argentina. In comparison to other eagle species, which mostly soar in broad, open regions, their shorter wings allow them to better navigate through the forest.

Even so, the harpy eagle is the world’s biggest extant eagle. Its black, grey, and white feathers are similar in males and females, and the elevated feathers on its head give the bird a puzzled face. If the harpy eagle’s gothic appearance wasn’t frightening enough, consider its formidable talons.

The back talons are 5 inches long and are larger than the claws of a grizzly bear. In fact, no other eagle has such massive talons. Given its enormous power, it must come as no surprise that the harpy eagle occupies the apex of the animal kingdom’s food pyramid.

So, what exactly do harpy eagles eat? Prey for this raptor includes sloths and monkeys, among other things. They almost never fly vast distances. They have more than enough strength to pull up tiny animals weighing up to 17 pounds because they save energy.

Silent hunters—they don’t make much noise—these eagles may remain on a perch for hours on end, just waiting for a meal to pass by.

With the ability to fly at speeds of up to 50 miles per hour, they can easily swoop down and steal their prey. Because of the loss of their habitat due to rainforest development, harpy eagles are becoming rare in Latin America.

Due to their monogamous nature and the fact that they produce one eaglet every two years, even a small decrease in population size might make population recovery difficult.

In some ecosystems, the extinction of this apex predator represents a devastating blow to the ecology.

For example, their hunting of creatures such as capuchin monkeys aids in natural population control.

This is important because these monkeys steal eggs from bird nests, potentially causing species extinction.