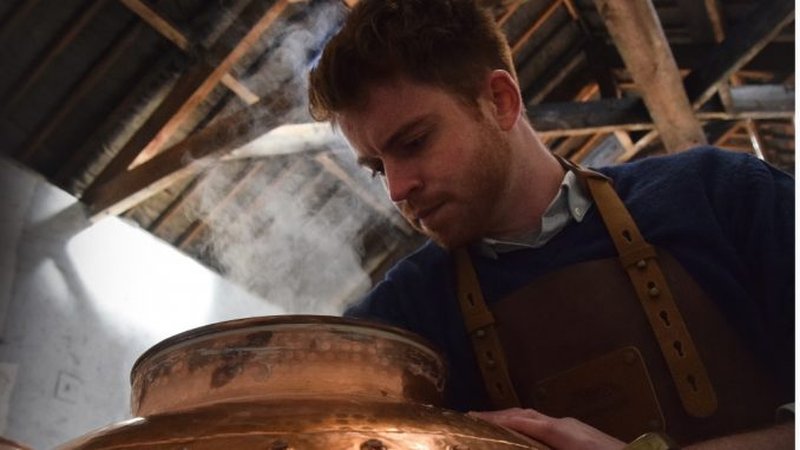 Making a business from the sale and distribution of alcohol is a world fraught with regulations. In the UK, especially, anybody looking to serve alcohol on premises can find themselves trapped in a maze of red tape that appears impossible to escape.

Rules are made to be bent, however. While we would never condone engaging in any suggestion of illegal or illicit activity, we can’t help but tip our hat to the ingenuity of anybody that finds a loophole in the law.

One such loophole is a British decree that an alcohol license is not required to serve intoxicating beverages on a train that’s in motion. That sounds very niche, and something that could not possibly be exploited.

Two enterprising souls in the north of England, Chris Taplin and Barry Mageean disagreed. They found a fascinating method of getting around this law and creating a successful gin distillery without the hair-tugging frustration of local and national bureaucracy.

The history of gin

Gin has enjoyed something of a renaissance in reputation throughout Britain in recent years. For years, it had a somewhat sketchy reputation, mostly thanks to a questionable history.

In the 18th Century, Britain went gin-crazy. The country was at war with France for much of the previous century, which meant that brandy was off the agenda for most of the nation’s populace. To discourage citizens from obtaining brandy through illicit means, the government abolished alcohol licensing and encouraged the production of gin.

You can probably imagine what happened next. Gin production – and, by extension, consumption – shot through the roof. This was terrible news for the nation, as a generation of intoxicated revelers was born.

One magistrate lamented, “the strong inclination of the inferior sort of people to these destructive liquors, and how surprisingly this infection has spread within these few years.” His concerns could undoubtedly have been worded more tastefully, but he had a point. Gin was creating a nation of debauched drunks that were behaving appallingly in the street.

Gin became so commonplace, and blamed for so many of society’s ills that it earned the nickname, “Mother’s Ruin.” This was borne of the fact that even previously responsible women were abandoning their childcare responsibilities in the pursuit of their next drink.

The authorities grappled with the increasing issue of gin with an enthusiasm that many people compare to the 21st century’s war on drugs. Increasingly strict – and unpopular – regulations were put in place, and riots followed.

What does all this have to do with Chris Taplin and Barry Mageean? We’re getting there.

The birth of an idea

As discussed, gin has enjoyed a renaissance in the last decade or so. After many years of being considered the drink of the desperate and undesirable, designer gins and specialist distilleries are popping up all over the country. Chris Taplin was aware of this and was considering entering the world of gin as an entrepreneur.

Barry Mageean was working as the head distiller at Masons, a gin distillery based in Yorkshire when he met Chris Taplin. Mr. Taplin was enjoying a tour of the facility and found Mageean to be a gifted orator. The two struck up a conversation that soon became a friendship, and in turn, bloomed into a business partnership.

Taplin and Megeean decided to launch their gin distillery, which became known as Taplin & Megeean. Sometimes, the most straightforward solutions are the best. To this day, the two men sell a range of four famous gins.

They also set to work converting a disused railway station as their base of operations. It was at this point that Taplin and Megeean hit upon a snag, however. Their alcohol license was taking an age to come through, and they were keen to start selling their wares. How else were they to recoup their losses?

Mageean began the process of completing the necessary paperwork and attending licensing courses. It was during this process that he discovered a loophole in British licensing law – and hit upon a cunning plan.

Going off the rails

Mageean discovered that he could sell alcohol on a train without a license, as long as it was in motion. Useless information for most people – but very helpful for a gin-maker that owned a disused railway station, and was waiting for his license to come through.

Megeean and Taplin arranged a pre-release celebration for their range by making use of an aged steam train parked at the station. Attendees of the launch party were ushered onto the steam train, and embarked on a 150-minute round trip throughout Yorkshire.

Naturally, the train was in motion throughout this time. As a result, Chris Taplin and Barry Mageean were technically taking their passengers on a journey. The fact that they all happened to sip on some excellent gin and tonic during this time was neither here nor there, as far as the law was concerned.

Arguably the most inappropriate behavior on display would have been making a phone call in the quiet carriage.

Let’s be clear about one thing before we wrap up here – Taplin & Megeean operated utterly above board and within the confines of the law. They don’t even need to think quite to creatively any longer, as their alcohol license has now arrived.

Anybody can purchase one of their gin bottles from the Taplin & Megeean website, and enjoy the fruits of their labors. If the gin is half as impressive as the creativity and ingenuity of its creators, it’s undoubtedly something well worth investigating. Just drink responsibly.

The world is not ready for a gin craze to rival that of 18th Century Britain.