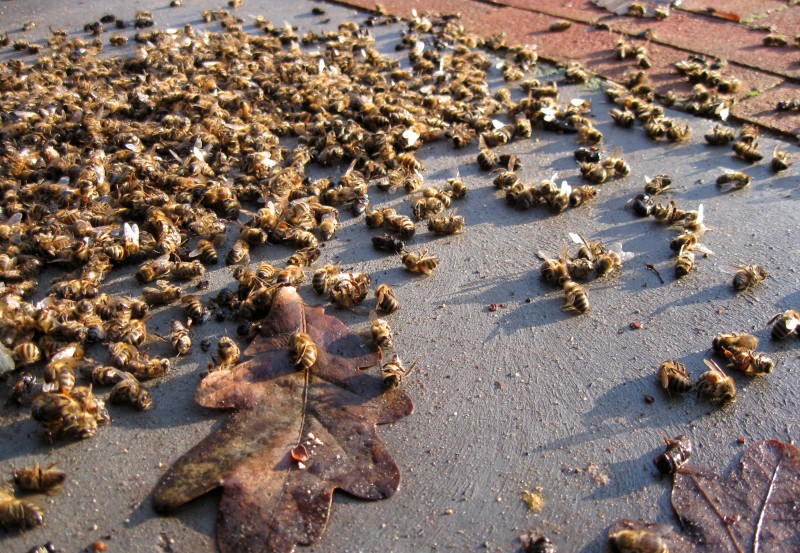 It’s no secret that the bee population of the world is in real danger – placing the human race in jeopardy too. We have even discussed this ourselves, through the lens of concerns over pesticide use in the United States. This is a global a local issue, however. In Brazil, half a billion bees were killed in a mere three months.

That’s a lot of dead bees. This cannot be good

No, it most certainly isn’t.

This all occurred at the beginning of 2019, across southern states throughout the nation. Aldo Machado, who holds the title of vice president at the Rio Grande do Sul beekeeping association, made an unpleasant discovery of piles on top of piles of dead insects.

He had noted that the bees appeared under the weather around 48 hours before, but death arrived before they could be helped.

The problems continued to mount, too. Bees are efficient insects, and they don’t have time for sickness or ill health. When certain bees returned to the hive, unable to perform their duties, their healthy compatriots swiftly removed them. A beehive is no place for malingerers.

Alas, the healthy bees that performed this work soon became infected themselves. Before long, the hive was facing an epidemic – resulting in these eye-watering 500 million deaths.

With Brazil already experiencing the Amazon rainforest fires, the last thing the beleaguered country needs to face is another crisis of nature. What makes things worse is that this tragedy was wholly avoidable.

Just like in the USA, the use of lethal pesticides was blamed for the devastation. Fipronil and neonicotinoids, banned in countless territories but still legal in Brazil, are believed to be responsible.

Why is this happening in Brazil?

Jair Bolsonaro, the Brazilian president, took over the hot seat in January of 2019. You may notice that this was around the time that the nation’s bee population began its sharp decline.

Since Bolsonaro assumed power, sales of pesticides from Brazil have rocketed to 27% higher than the previous year. It would be churlish just to blame Bolsonaro, though. He is simply running with a baton first picked up by his predecessor, Michel Temer.

There is no sign of things slowing down, though. Brazilian congress is presently considering a bill that will place even fewer restrictions on the use and sale of pesticides. A wide range of companies, both domestic and international, has thrown their hats into the ring. Killing bees is their business, after all, and business is good.

This is all a result of a steady climb in the uses of pesticides. The United Nations claim that Brazil uses some 770% more pesticides now than back in 1990. 29 years was a long time ago, but all the same, that’s a huge step up.

Naturally, the Brazilian authorities have an answer for any criticism associated with this. The country’s Agriculture Ministry is at pains to point out that, pound for pound, there are more prominent offenders out there.

Brazil ranks at 44th in the global league table of pesticide use per hectare. China is at number one, for those of you keeping the score at home. Also, the Ministry likes to remind us that Brazil has a tropical climate. This, they claim, makes comparisons to regions with different temperatures wholly unfair.

Other government bodies do not share this attitude, though. Anvisa, the Brazilian Health Regulatory Agency, have made this clear. After taking samples for a report on food safety, this body announced that some 20% of their findings contained unauthorized or excessive levels of pesticides.

All of this was without looking for glyphosate – a pesticide that, despite being banned in most other territories, remains the bestselling chemical of its kind in Brazil.

Are the Brazilian people in danger?

The entire human race is in danger if we don’t start taking better care of the bee population. For now, however, Brazil is facing a more immediate crisis. Traces of pesticides in food is never a good thing.

Perhaps Carlos Alberto Bastos, who holds of the title of president of the Apiculturist Association in Brazil’s Federal District, said it best. He simply and succinctly claimed that “the death of all these bees is a sign that we’re being poisoned.”

There is also the risk of pesticides seeping into Brazil’s national water supply. We may start to see the consequences of this in the future. That’s assuming that we’re still around to care. With this rampant use of pesticides, countless insects are staring down the barrel of extinction. In addition to bees, we may lose the following:

Each of these insects has a role to play in nature. With almost 200 different types of pesticides that are banned in Europe still being used in Brazil over the last three years, they’re unlikely to be around to do so for much longer. We have long passed the point of concern, and we’re now firmly entrenched within a crisis.

Can we do anything about this?

Directly, in relation to Brazil? Not really. Sorry if that sounds defeatist, but it’s true. Given that Jair Bolsonaro has made some controversial comments about the rainforest fires, and continues to import and export pesticides at a rate of knots, nature is clearly not something that he loses any sleepover.

In terms of general care for the bee and insect population, however, we can all do our part. Starting by not using pesticides, obviously. Not killing our six-legged friends is something of a low bar, though. We should be looking to enhance their quality of life in any way that we can.

If you see a bee lying on the ground, it may not be dead. Bees frequently exhaust themselves pollinating plants and simply run out of energy.

Fill a saucer with water, and mix in a little sugar. Lay this down in front of the bee, and see if it takes a drink. If so, you’ll likely see the insect take to the skies again in no time. Congratulations – you just made a small step toward saving the world.

In addition, make your yard and property as insect-friendly as possible. We’re sorry if you don’t like the sight of these critters. They are so important, though. You can help out by letting your grass grow out, planting flowers that will attract bugs, and leaving piles of deadwood for them to burrow within.

Even if you can’t stand insects, you’ll be doing the rest of nature a favor. Without insects, other species such as birds lose their food source. It’s the circle of life, as Elton John memorably claimed, and it’s in our hands to keep it turning. If we fail to do so, the results could be catastrophic.