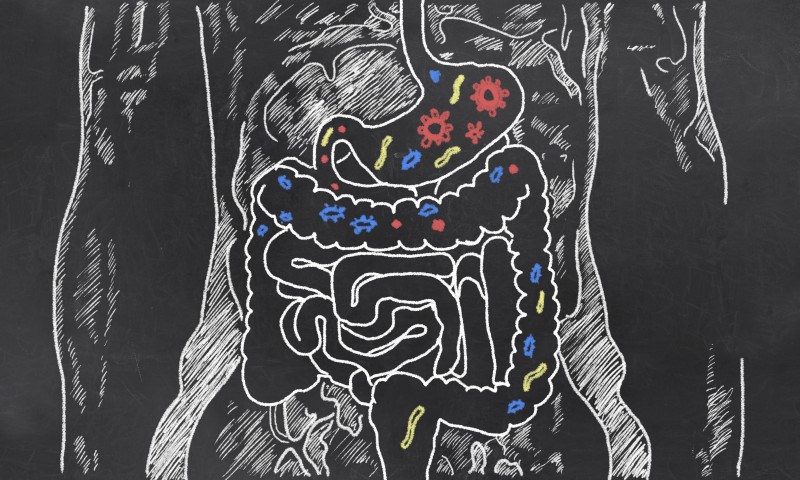 Your gut is connected to your brain, by a newly discovered neuron circuit

The gut has long been considered to be a highly intelligent selection of organs. There’s a reason why we refer to gut instinct, after all. Now, it appears that the gut is even smarter than we ever gave it credit for.

Our gut contains more than a hundred million nerves, all of which send messages to the brain. That’s why we receive regular messages from our stomach to our brain.

Not eating for a while? Rumbling in your stomach will be accompanied by an anguished sensation in the brain that says you need to order a pizza, post-haste. If you devour that pizza too quickly, you’ll receive very different messages that reprimand you for your gluttony.

None of this is news. We’ve been relying on our gut to tell us when we need fuel, and to warn us that we’ve over-indulged, for years. What’s interesting is a new study that reveals a direct link from the brain to the gut through a hitherto-unknown neural circuit. This means that the brain and gut can communicate in a matter of seconds.

What’s more, it’s opened up a new world of healthcare possibilities. If the gut if not performing duties appropriately, medical conditions can follow. Eating disorders and Type 2 Diabetes have a visible link. Now, it seems, the issues with the gut can be linked to depression, anxiety, and autism.

Does the gut seriously communicate with the brain?

Yes, it does. The road to this discovery began in North Carolina’s reputable Duke University in 2010.

Diego Bohórquez, who works as a neuroscientist at the academic powerhouse, was studying enteroendocrine cells under a high-powered microscope. These cells are found in the lining of the human gut, generating the hormones that force digestion and prevent us from feeling hungry.

Every cell has a small protrusion, akin to afoot. These looked similar to the synapses found on neurons in the human body, which enable communication. Looking closer at the cells, Bohórquez started to ponder.

Science has long been aware that these cells could communicate with the nervous system. The question was whether they could also speak with the brain in the same way, by generating electrical signals. This would involve the use of the vagus nerve, which connects the brain stem to the gut in the human body.

Bohórquez and his team did what scientists do – they began to experiment. Laboratory mice were injected with a form of the rabies virus via their colon, which is part of the gut. This was done because rabies travels via neuronal synapses.

Eventually, the infected cells combined with vagal neurons, which is the longest cranial nerve in the body. This created a symbiotic relationship, and the cells released glutamate. Glutamate is a neurotransmitter, released by the brain. It’s what gives us our sense of taste, which we can naturally link to the gut.

This all took place in less than the blink of an eye. The time taken was estimated to be around 100 milliseconds. That’s considerably faster than the bloodstream can send hormones to the brain, and confirms that the brain and gut are intrinsically linked – and, seemingly, in constant communication.

If the gut is so smart, why don’t I crave healthier food?

As The Simpsons so memorably claimed, you don’t win friends with salad. Unfortunately, you don’t lose pounds with cheeseburgers. We may wish that the gut is smart enough to guide us to the right foods, but it doesn’t quite work that way.

For this, we can blame the micro bacteria found in your gut. Every food craving we experience is linked to these bacteria, which send their own messages to the brain. Every individual has unique bacteria, too, which is why we all have different cravings from time to time.

Some of us would sell our own mother for a bar of chocolate. Others could care less about sweet foods but would do anything for a bowl of pasta or noodles. This is because the bacteria are telling the brain that some foods taste better than others.

Now, don’t treat this as an excuse to clear your refrigerator of anything vaguely healthy and replace it with junk food. It’s not only these bacteria that are responsible for your cravings. They will typically ask for more of what you put into your body.

This means why, if you eat a substantial amount of sugar, you’ll be tempted to continue gorging. Healthy eating, meanwhile, can become equally addictive if sustained for long enough. This is because the micro bacteria in your body develop a taste for broccoli, for example, and start fast-tracking messages to the brain to ask for more.

Is this how gut-to-brain communication boosts mental health?

Yes. Boosting the signal from gut to brain has apparent physical health benefits. If you consume something that attacks your body – poison, for example – you’ll want to know about it quickly.

The faster you know that you’re in danger, the quicker you’ll be able to do something about it. Waiting for the bloodstream to send a message may allow permanent damage to be done.

There’s more this though, including the boosts that a gut-to-brain connection can provide to our mental health. A paper published in the journal Cell discusses this more detail, based upon a further study conducted on mice.

This boost in mood is something that will significantly benefit any human patient suffering from depression. Until now, the link between this condition and a malfunctioning gut was suspected, but never fully understood. Recent discoveries help us comprehend exactly why eating right makes us feel so much better about ourselves.

It’s not just because we anticipate happier reading when we step on the bathroom scales. It’s because our gut is speaking to our brain, and providing it with a sense of reward. Put simply, a functional and healthy gut enables a high-performing and contented brain.

This connection also now stretches to autism. Scientists have now stopped investigating the brain alone when studying this condition, and now taking a look at the gut. Children that are diagnosed with autism often experience gastrointestinal issues.

It is now believed that mutations and malfunctions to the gut can be responsible for ‘faulty wiring,’ for want of a better word, in the brain.

Work is ongoing to see if treating gut disorders in autistic patients can minimize the risk, and impact, of autism. With new doors being opened by research, we may even be able to eliminate the condition in the future.