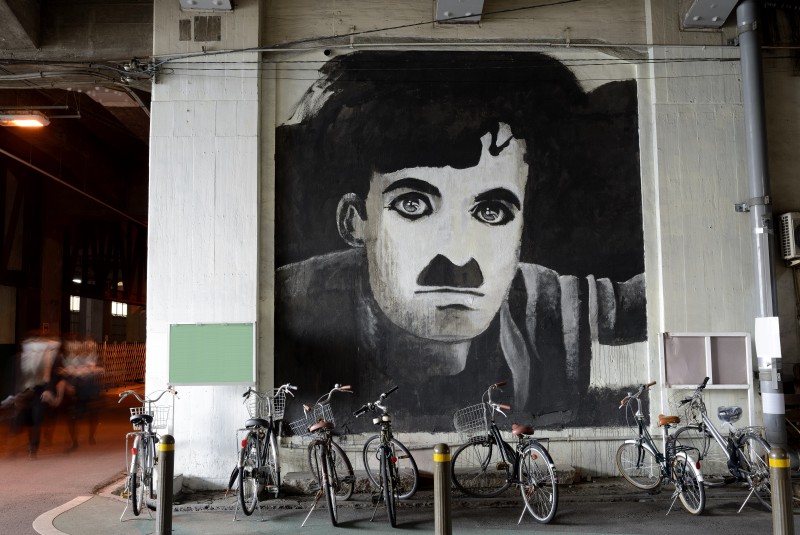 When discussing the great comedians of the silver screen, the name of Charlie Chaplin needs to feature prominently. The British actor had a gift for physical comedy, and his character of ‘The Little Tramp’ enthralled movie-going audiences throughout the silent era.

By the late 1930s, however, Chaplin was on the outs with Hollywood. Silent comedies were out of favor in a world that now boasted such Technicolor cinema classics as Gone with the Wind and The Wizard of Oz.

If Chaplin’s career was to survive, he was going to need to produce a real rabbit from the hat.

That rabbit took the shape of The Great Dictator, Chaplin’s lampoon of Adolf Hitler and the National Socialist Movement. As Hitler rose to worldwide prominence, his resemblance to Chaplin had not gone unnoticed. The two men were also born just four days apart.

In turn, the actor himself was becoming increasingly disturbed by the political climate in Germany. As a result, he was compelled to pen one of the greatest – and most important – films of the era.

Enemy of the state

Despite fiercely resisting the arrival of talking pictures – Chaplin later wrote in his autobiography, “I was determined to continue making silent films. I was a pantomimist in that medium, I was unique, and without false modesty, a master” – the filmmaker reluctantly conceded that dialog was the best way to portray his message.

Charlie Chaplin started work on the script for The Great Dictator in 1937, by which point Adolf Hitler had made serious political headway in Germany. Chaplin had numerous reasons to loathe and fear Hitler.

In addition to his liberal politics jarring with the ideology of Nazi Germany, Hitler and his generals had identified Chaplin as a scourge.

A professor by the name of Johann von Leers was an honorary member of Hitler’s SS. von Leers was also an unabashed anti-Semite, and among his many published works was Juden Sehen Dich an – loosely translated, “The Jews are Looking at You.”

Juden Sehen Dich an was a one-track diatribe that defamed and slandered the reputation of the Jewish community, listing many prominent figures in the public eye. Chaplin was among these, described as a ‘pseudo-Jew’ by von Leers. This theory may have been inspired by Albert Einstein, who claimed that Chaplin’s grandfather was Jewish.

Quite understandably, Chaplin was compelled to retaliate in the best way he knew. He opted to poke the bear and tickle ribs by satirizing Hitler with a new character, Adenoid Hynkel (the dictator of the movie’s title), as well as portraying a Jewish barber about von Leers’ claims.

Unfortunately, he soon discovered that the American studio system lacked the stomach to support his creative endeavors. Chaplin could not find funding for his project, as the holders of the purse strings of the major studios balked at the idea of potentially upsetting their German audiences.

The spirit of independence

It’s impossible to understate the popularity of Charlie Chaplin at the peak of his career. By the age of 26, he was one of the richest men in the world, which suited Chaplin just fine. In the words of the man himself, “I went into the business for money, and the art grew out of it. If people are disillusioned by that remark, I can’t help it. It’s the truth.”

Note the all-important second part of that sentence – art very much grew out of Chaplin’s wealth. Shunned by the studios that he had generated so much revenue for, Chaplin used his fortune to pay for the production of The Great Dictator.

He was credited as the star, writer, producer, and director of the movie, which in itself was not unusual. Still, it was also produced under the banner of the Charles Chaplin Film Corporation. United Artists agreed to distribute the film around the world but refused to place their hands in their pockets to fund production.

Filming began in 1939, not long after Hitler had invaded Poland and just a day before Britain declared war on Germany. Of course, the USA remained neutral in the conflict at this point. This was another reason why American studios were reluctant to associate themselves with Chaplin’s picture.

They feared that Hitler would view it as the nation taking sides.

Chaplin himself wavered at various points of production, too. As the brutality and atrocity of the Nazi party became more and more commonplace, and thus internationally renowned, Chaplin began to question himself.

After all, it was becoming increasingly difficult to see the funny side of National Socialism.

It was the American President Franklin Roosevelt that convinced Chaplin to continue, promising to assert influence and ensure that no ally of America would ban the movie. Chaplin proceeded and released his film in 1940 to a rapturous reception.

Although Chaplin later conceded that he wished he’d made the movie less amusing, it’s still considered a comedy classic to this day. Even in 1940, however, The Great Dictator had an unlikely fan.

As Chaplin was declared a ‘pseudo-Jew,’ his films were banned in Germany. However, this didn’t prevent Adolf Hitler from getting his hands on a print of the movie – the Fuhrer was believed to be a huge fan of Chaplin’s prior works. It is claimed that Hitler arranged two personal screenings.

If the legend is to be believed, he laughed uproariously – and even cried at one stage.

As for Chaplin, however, The Great Dictator proved to be the last great work of his career. The movie was a huge financial success and was nominated for five Oscars, including Best Picture.

However, it concluded with Chaplin breaking character and addressing the audience directly with a plea to put to a stop to fascism. This deterred some critics and audiences, who believed that movie stars had no right to bring their politics into their art.

The following years were dominated by legal troubles in Chaplin’s personal life, which he conceded sapped his creative juices, and when he did return to the screen, he continued to politicize his work.

The McCarthy witch hunts led to accusations of communist sympathies, and when Chaplin left the USA in 1952, his permit for re-entry was revoked.

Charlie Chaplin was permanently exiled from the country where he had made his career and fortune, and he lived out the rest of his days in Europe. As it has a way of doing, however, history softened America’s stance on Chaplin, and he was granted a lifetime achievement, Oscar, before his death in 1977.

Today, The Great Dictator remains celebrated as a satirical masterpiece. The Academy of Motion Pictures Arts and Science holds a copy of the screenplay in its library, and the Library of Congress declared the film to be “culturally, historically or aesthetically significant,” resulting in the preservation of the negative.

Hollywood may have turned its back on the production of The Great Dictator, but it’s now been embraced. That it still inspires as many laughs today as it did in 1940 is a testament to Chaplin’s skills as a comedian – and his courage as an artist.