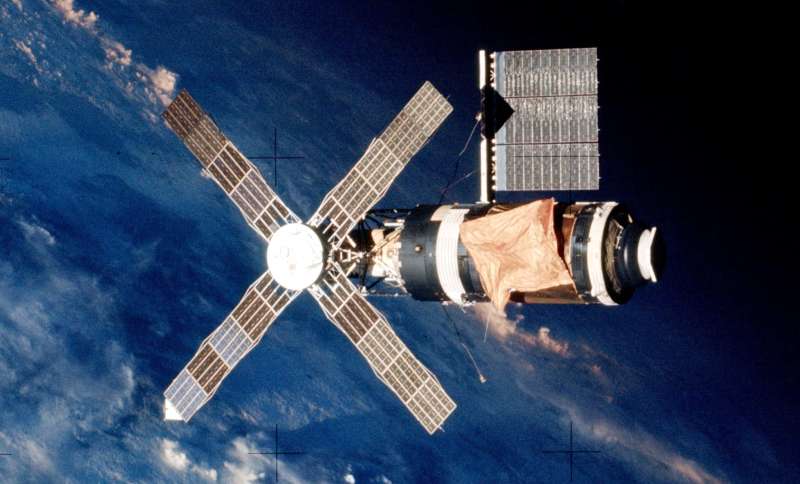 The technology industry never fails to marvel and astound us, but it has always endured something of a reputation as a Boy’s Club. NASA is no exception to this. The first American female astronaut, Sally Ride, made the journey into space in 1983, and things have slowly improved ever since.

Floating freely on the flight deck, Sally Ride communicates with ground controllers in Houston during her STS-7 mission in June 1983. (Image: © NASA)

Back in the 1970s, however, any interaction with a female was a considerable shock. That’s how Owen K. Garriott and his wife Helen played a prank on his fellow astronauts during a mission.

In 1973, the Skylab space station – America’s first such technological marvel – was undergoing orbital exploration. The crew was exclusively male, as was so often the case at the time.

Naturally, this meant that Robert Crippen, the communications specialist on the ground in Houston, was started to hear a female voice on his radio. “Hello Houston, this is Skylab. Are you reading me down there?” asked the voice. Crippen was understandably baffled.

He was even more confused when the caller identified herself as Helen Garriott, wife of famed astronaut Owen. Just what was going on? Was there a glitch in the system, or had somehow Helen Garriott managed to stow away on the mission?

When asked what she was doing on the Skylab, Helen replied, “Well, we just came up to bring the boys a hot cooked meal. They haven’t had one for quite a while. We thought they might enjoy that.”

Helen also made a handful of comments on how California looked from space, claiming to be able to observe forest fires from her vantage point and praising the beauty of the sunrise. Eventually, she signed off by the call by explaining, “Well, I see the boys are floating in my direction. I’ve got to get off the line. I’m not supposed to be talking to you. See you later, Bob.”

You can read the full transcript of the conversation here.

Naturally, Mission Control in Houston was stunned. There had been no precedent for a stowaway on a space mission, and somebody’s head was sure to roll for letting this one pass. At least, it would have done had they not quickly realized that it was a prank. They just weren’t sure how it had been pulled off.

It transpired that the Garriotts had cooked up the practical joke before Owen set off in his mission. He wrote a script and asked Helen to read the lines out for him to record. Perhaps more importantly, he asked her to leave pauses between every sentence so that Mission Control could respond.

Garriott then played the tape over the communications station, reaching Houston. This left Robert Crippen convinced that he was holding a real-time conversation with Helen Garriott.

The practical joke has gone down in NASA history, often cited as one of the best pranks that an astronaut has ever pulled. While some of the content may be considered in questionable taste in the 21st Century – women are now recognized as capable astronauts, not just zero gravity homemakers! – it certainly raises a wry smile.

What happened to Skylab?

Skylab enjoys its place in history as the first space station operated by the United States. The station spent around six years in the Earth’s orbit, manned by a succession of three-person crews. Owen K. Garriott was the science pilot on the second of these missions.

Skylab hosted a manned crew for the final time in 1974. NASA had planned to use the space station more, but it fell into a state of disrepair. Skylab did launch again in 1979, but it began to fall apart in flight. Pieces fell into the Indian Ocean and over rural parts of Australia. Fortunately, nobody was killed or injured.

What became of the Garriott’s?

Little is known about Helen Garriott aside from her role in this classic practical joke, but Owen K. Garriott is an icon in the field of space exploration.

He spent 56 days aboard the Skylab in 1973, which was double the world record at the time. The next crew, who spent 84 days in orbit, surpassed this record. Garriott returned to space in 1983, aboard the STS-9 shuttle. This mission was considerably shorter, at around ten days.

Garriott’s time upon the Skylab is celebrated and cursed in equal measure. Garriott and his fellow astronauts Alan Bean and Jack Lousma astonished NASA with their competence and endeavor, consistently completing work ahead of schedule. While this was cheered, it also set a dangerous precedent that other crews struggled to match.

Upon retiring from space exploration, Garriott continued to provide consultation services to NASA. He also served as a tireless philanthropist for numerous charities and is considered one of America’s greatest astronauts. This accolade was earned through his feats, not just his sharp sense of humor!

If you’re interested in learning more about Owen K. Garriott, he documented his outer space experiences in a brace of books. Homesteading Space discusses the Skylab space program in great detail, while he also co-penned Introduction to Ionospheric Physics.

Owen and Helen Garriott were childhood sweethearts who married in 1952. They eventually divorced, but not before raising four children together. Their third son, Richard, is a celebrated figure in his own right.

In addition to creating the Ultima franchise of video games, Richard Garriott toured space as a tourist in 2008. This made the Garriotts the first American father and son to both entering space. In a nice touch, Owen K. Garriott manned Mission Control for the launch of his son’s shuttle.

Owen K. Garriott passed away in 2019, at the age of 88. He left behind an astonishing legacy of space exploration – and gifted us with one of the most famous practical jokes of all time.

NASA announces payload for next Moon trip
NASA released new image of the second interstellar object in our solar system
This stellar engine could theoretically move Earth’s entire solar system
We may have got it all wrong about the shape of the Universe
Related Topics: