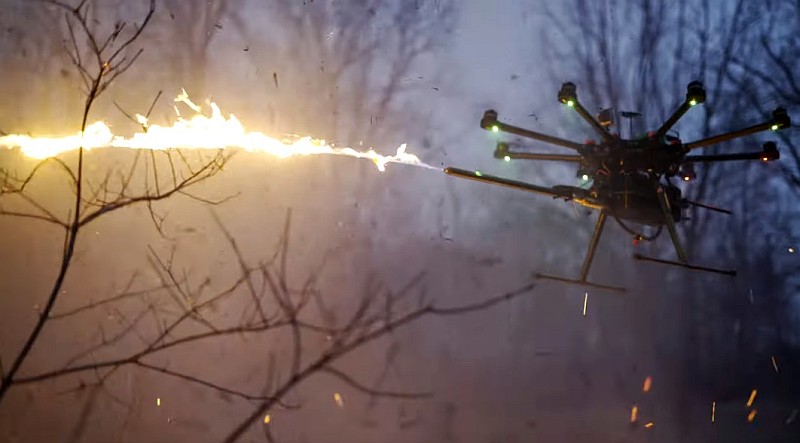 Flamethrower drones are now a thing and you can have one

Drones are frightening to many people. The idea of an unmanned piece of technology that can survey the landscape from above is understandably unnerving. Toss in the fact that these weaponized devices can drop explosives and you have something even more alarming on your hands.

Sure, they can also be used as a force of good – or, at the very least, a force for capitalism in the shape of deliveries that don’t require human intervention. This doesn’t change the fact that the presence of drones makes a lot of people very nervous indeed.

On the other hand, somebody out there clearly decided that drones were too fluffy and cuddly. That’s the only possible explanation for the latest addition to drone technology – built-in flamethrowers.

This device – dubbed the TF-19 WASP – is the brainchild of the imaginatively named business Throwflame. If you have ever dreamed of spitting flames from a safe distance, you can now do so. All it will cost you is $3,000, and a brazen disregard for the health and safety laws of the nation.

Why would anybody need a drone flamethrower?

It’s a fair question, and the answer, “duh – because it’s the coolest thing that anybody has ever seen!” will probably not carry much weight in polite society. Naturally, Throwflame has its reasons for creating this mechanical fire hazard, though. On paper, these explanations are even reasonably substantial.

Throwflame describes the TF-19 WASP as “a game-changer for clearing vital infrastructure, igniting remote vegetation, and eliminating pests.” That all sounds fair. Maybe farmers will have use for the drone. How many farmers have a spare $3,000 kicking about and a desire to embrace technology is a different question, but ours is not to reason why.

We’re being flippant here, of course. In reality, if we ignore the frankly frightening possibilities that the TF-19 WASP opens up to military operations around the world, it could actually be quite helpful to local authorities and government bodies. Some of the reasons that this drone could be put to work include:

Clearing debris away from power lines. If something gets stuck on a live electrical power line, it’s a dangerous job to remove it. Sadly, this happens. Why put human lives at risk, though, when you could send a machine to do the job? Simply aim the drone, and open fire. Literally. The TF-19 WASP can scorch the unwelcome object, clearing the power line. Aiming uncontrolled fire at live electricity. What could possibly go wrong?

Burning contaminated agricultural land. So, here’s another dangerous job that could remove the involvement of humans. If there has been an outbreak of fungal or viral disease in a particular agricultural area, a scorched earth policy is sometimes the only option to prevent an epidemic. Nobody wants to be the one to start that fire, though. With the aid of the TF-19 WASP, it can be done from miles away. Sure, this means that somebody also isn’t on hand to contain the fire if it grows out of hand, but wait… what else can the TF-19 WASP do?

Contain back-burns and pre-burns on forest fires. That’s right! The TF-19 WASP can literally fight fire with fire. That’s the theory, at least. The drone can undertake a theoretical ‘controlled burn’ that pushes an inferno back on itself. Naturally, professional firefighters will still need to get involved at some stage. Maybe the TF-19 WASP can make their job a little easier, though.

Eliminating pest infestations and nests. Okay, here’s where things start to get really murky. The truth is, nobody wants a wasp or hornet nest in a child’s playground. Which is ironic really, given the moniker of this device. All the same, does that really give us the right to start scorching these insects? Professional pest handlers exist for a reason and could rehome any nests. In addition, who gets to define a pest? Would a bored, rich individual that uses the TF-19 WASP for their own amusement turn it on a rabbit warren that is eating their prized vegetables?

As you can see, the TF-19 WASP opens up a number of moral and ethical quandaries. We’re always keen on seeing new technology, but this particular invention seems unnecessarily dangerous to us.

Safety Schmafety! I want one! Tell me more

We’re willing to wager that you’re not alone, buddy. A number of people reading this are no doubt already reaching for their savings jar to see if they can cobble together $3,000 in loose change. That number may rise or fall upon viewing this video of the TF-19 WASP in action.

If you remain convinced that this has leaped to the top of your Christmas list, you’ll no doubt want to learn a little more about the specs. The TF-19 WASP spits flames at a distance of up to 25 feet, for as long as 100 seconds at a time. That’s more than long enough to wreak havoc serve the public trust in a sensible and agreeable manner.

You can order your TF-19 WASP directly from Throwflame. As you’ll see, this just buys you the attachment (which the manufacturer charges $1,500 for). The reason we’ve been bandying around a figure of $3,000 is that you’ll also need a drone itself to make use of this attachment.

This will need to carry at least 5lbs of weight, so ensure that your drone is up to the task. This will cost around $1,500, especially if you take Throwflame’s advice and invest in the DJI S1000 model.

Just be prepared to be patient – due to high demand (we don’t want to know why), there is a waiting list of up to six weeks.

Still want one … But surely this is illegal for civilians?

Not if you follow the laws of the Federal Aviation Administration. Throwflame is at pains to point out that the TF-19 WASP is not a weapon, and must never be used as such. To be legally compliant, you must never:

These are general rules for the use of any kind of drone. Clearly, flamethrower attachments were not considered when the FAA drew up these guidelines. We hope that it goes without saying, but let’s throw one more unwritten law into the mix – you must not use the TF-19 WASP to set fire to anything that has no business being on fire.

We stand by our view that the TF-19 WASP is terrifying. Fascinating, and a wonderful piece of human endeavor, but terrifying all the same. Maybe we’re just being left behind by a brave new world, though. Who knows what weird and wonderful inventions the human race will concoct next?