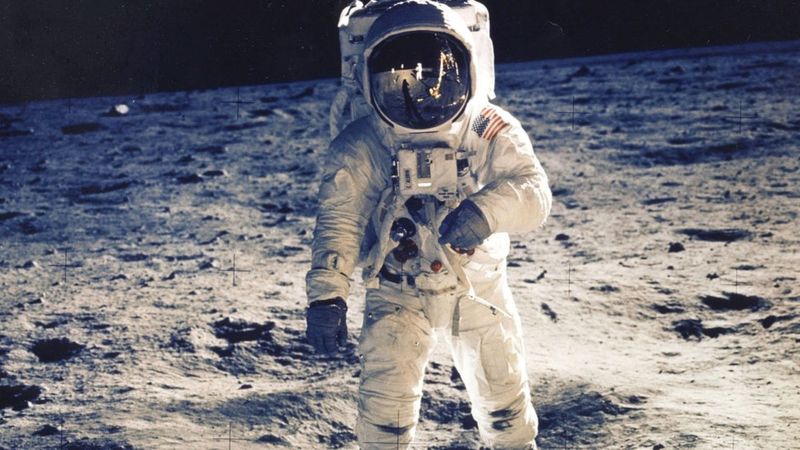 Those words will no doubt send shivers down the spine of readers of a certain age, who recall the day that Neil Armstrong and Buzz Aldrin became the first people to set foot on the Moon. Ever since that fateful day in 1969, however, rumors and theories have abounded that moon landings were faked. In fact, it’s one of the most popular conspiracy theories in the world.

Despite constant denials from NASA and others, claims that the moon landings were faked have never entirely gone away. Now, however, a film expert intends to put this legend to bed once and for all.

Howard Berry, who works for the UK’s University of Hertfordshire, has pored over countless hours of video. He now firmly believes that he can prove that the moon landings were genuine. Before we get into Professor Berry’s findings, however, let’s assess just why they are necessary in the first place.

What’s this talk of a conspiracy?

If you’ve ever heard that the moon landings were faked, you have one man to thank – Bill Kaysing.

Kaysing was a writer that popularized the theory that the American government lacked the finance and infrastructure to send Armstrong and Aldrin on the Moon. Even if they did, according to Kaysing, they would not be able to return safely.

The conspiracy theorist claimed that the whole global phenomena were a fallacy. He doubled down on these beliefs, penning and self-publishing a book entitled We Never Went to the Moon: America’s Thirty Billion Dollar Swindle in 1976.

Kaysing did not have a background in science or any experience in working directly with NASA in which to draw these conclusions. However, he did work for Rocketdyne – a jet propulsion laboratory – as a technical writer. According to Kaysing, this provided him with a fundamental understanding of why the moon landings were impossible.

In the television documentary Conspiracy Theory: Did We Land on the Moon?, Kaysing claimed:

“The astronauts were launched with the Saturn V. Then, to account for their disappearance, they simply orbited the Earth for eight days and in the interim, they showed these fake pictures of the astronauts on the Moon. But on the eighth day, the command console separated from the vehicle and descended to Earth as, of course, was shown in the films.”

Did Bill Kaysing have any proof?

Of course not. This was a conspiracy theory, after all. Claims that Kaysing believed added credence to his beliefs were:

Baron’s wife and stepdaughter also lost their lives in the accident, witnesses saw the whole thing, and the death was ruled accidental and not suspicious. Kaysing, however, was not satisfied. He was adamant that the government, covering up their wrongdoing in faking the moon landings, murdered Baron.

He was a loose end, according to Kaysing, and he needed to be tied up. His family was deemed acceptable collateral damage.

As you’ll see, Kaysing’s claims became increasingly outlandish, so it will not come as a surprise that he held other, similar views.

He claimed that NASA deliberately sabotaged their own Apollo 1 and Challenger missions, murdering the astronauts aboard these crafts as they threatened to reveal the truth about the moon landings.

He also believed that the American government was attempting to brainwash citizens, seize control of public media, and poison the nation’s food supply.

Kaysing remained an active conspiracy theorist until his death in 2005. His claims regarding the moon landings appeared to strike a nerve with some, though. More and more people remain adamant that the moon landings were faked, which some are going as far as to claim that celebrated film director Stanley Kubrick shot the footage on a British soundstage.

How has this myth been debunked?

Obviously, not everybody was impressed with Bill Kaysing’s theories. Jim Lovett, the pilot of the ill-fated Apollo 13 mission, once described Kaysing as “wacky.” Kaysing attempted to sue Lovett for defamation, but the case was thrown out before it reached court.

Even so, more and more people still claim to found a loophole that proves the moon landings were faked. As discussed, Howard Berry has pulled together ripostes for every one of these accusations.

Firstly, there are the logistics of the tech involved. If the moon landings were shot on a soundstage or TV studio, a television camera in use in 1969 would have run at a rate of 30 frames per second.

The moon landings, however, were filmed using unique apparatus at a rate of 10 frames per second. This is why the footage is a little herky-jerky.

How about slowing the footage down after it has been shot, though? Hollywood movies have been using slow-mo as a special effect for years. Surely NASA would have the ability to do this too?

The fact is, television camera equipment in 1969 was only capable of capturing 30 seconds of slow-motion footage at a time.

Yes, NASA probably had state-of-the-art equipment. They probably even had better cameras than Stanley Kubrick. It is virtually impossible that they would have had access to tech this advanced, though. If they did, do you really think that it would not have been monetized and sold to interested parties?

One way around this would be to shoot on celluloid film, and then slow down the footage after. The film was shot at a rate of 24 frames per second, making this slightly easier. It can be reduced to 12 frames per second if you know-how. However, the film is also expensive – and the reels needed to be changed regularly. This is why movies are now almost exclusively shot digitally.

One reel of film captures 11 minutes of footage. The footage of the moon landings runs for 143 minutes. That means there would have been thirteen instances of changing the reel during this – and that’s impossible to hide.

Every time a reel of film needs to be changed, a small symbol (colloquially known as a ‘cigarette burn’) appears in the corner of the screen. This is a message to the camera operator or projectionist. There are no cigarette burns anywhere on the moon landing footage.

Finally, some claim that the American flag planted on the surface of the moon flutters, suggesting a wind source was nearby. Watch again – this is not the case. Once the initial momentum ceases after planting the flag, it lies static.

If you’re concerned about the shadows, convinced that an artificial spotlight created them, think again. Sorry, conspiracy theorists – that was the light of the sun. The Moon orbits the Earth, while the Earth orbits the sun. There is going to be some crossover there.

The idea of the moon landings were faked is a fascinating one. In fact, we’re willing to wager that many people will continue to refuse to allow the truth to get in the way of a good story. All the same, more and more proof piles up that faking this event was merely impossible. Sometimes, it’s easier just to sit back and applaud human endeavor.