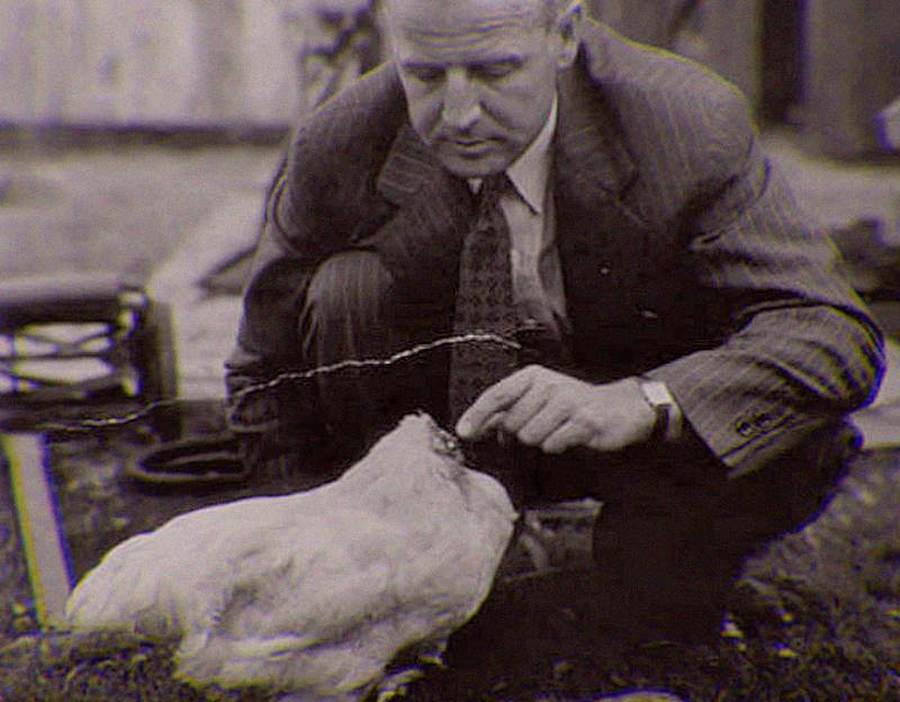 “Running around like a headless chicken” is a popular shorthand for somebody acting irrationally and erratically. It’s understandable if you just assumed this was just a figure of speech. After all, nothing – not even a chicken – could run around after losing its head. Could it?

To answer this, we have to head back to a Colorado farm in the town of Fruita. The year was 1945, and Lloyd Olsen was slaughtering chickens with a view to selling them at the local market. One of these birds – later dubbed Miracle Mike – was determined not to leave this mortal coil.

Olsen attempted to decapitate Mike with a cleaver, but the cut wasn’t clean. Despite lopping off the head of the bird, the jugular and most of the brain stem remained intact. Mike stood up and began hurtling around the barn.

Assuming that this was just a temporary anomaly, Olsen placed Mike in an empty apple crate. Returning to the barn in the morning, he was astonished to find that Mike was still alive. In fact, he lived on for another 18 months – becoming a celebrity in the process.

Realizing that Mike was not going to die, Olsen and his family opted to care for him. The chicken was fed through an eyedropper using a liquid combination of water and milk. Occasionally, he was also offered a kernel of corn as a treat. Sadly, this proved to be his undoing. Mike eventually died choking on corn.

Before this, however, Miracle Mike enjoyed a career in showbusiness. The chicken featured on the cover of magazines such as Time and Life, while touring sideshows made Mike a key attraction.

Admission was charged to watch this headless chicken peck, wander and even attempt to cluck. This was a lucrative business, helping Olsen pocket the equivalent of $50,000 a year at the peak of Mike’s fame. His life was brief, but his flame burned brightly.

The question remains, however – just how did Mike survive a beheading? The key was the fact that the jugular was missed, and the brain remained intact.

All chickens run when they lose their head to a blade. This will separate the body from the brain, but there will be remnants of oxygen in the spine. No longer receiving messages from the brain, the body will panic. Neurons will fire, and the legs will become active. This usually ceases after around fifteen minutes, and the chicken will die. That’s assuming the cut was clean and efficient.

In Mike’s case, the brain stem remained active. A chicken’s small brain is located at the back of the head, behind the eyes. This means that it can be missed through a sloppy beheading. Besides, a blood clot formed in Mike’s neck as the jugular was not severed. This prevented him from bleeding out.

As a result of this, despite lacking a head, Mike could still breathe, move, and eat. He wasn’t precisely the chicken he was before the incident. The fact that he lived on is a testament to his fortitude, though. Maybe we should all think about the ballad of Miracle Mike next time we’re facing hardship. He is an inspiration in his own way.