This Dutch village of Giethoorn has no roads or cars 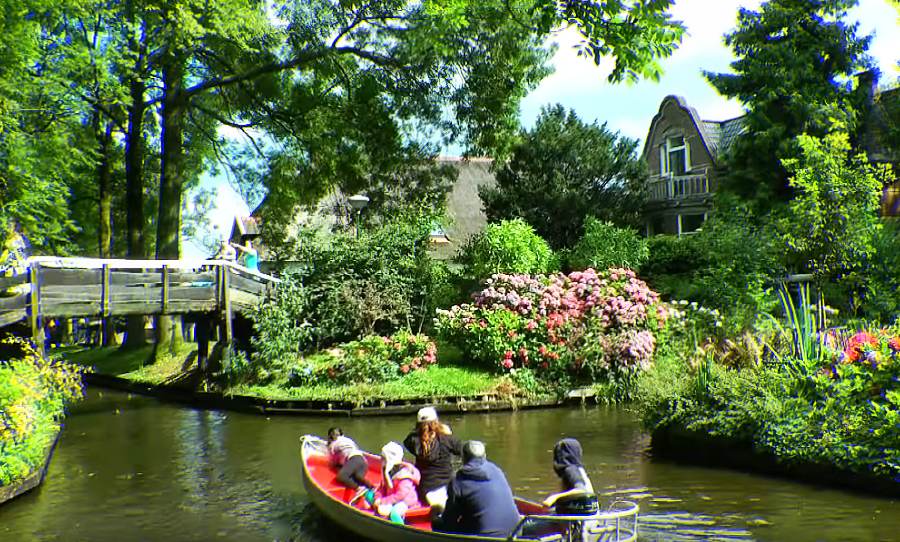 If you’re planning a vacation, you’ll be keen to escape all of life’s little challenges. That means no worries about paying bills, fielding work calls and emails, and no getting stuck in traffic. Few things can harsh a relaxing mellow more than being stuck in a traffic jam, attempting to block out the sounds of sirens, car horns, and fist-shaking yelling drivers.

With this in mind, the small Netherlands village of Giethoorn is a popular destination of Dutch nationals and international visitors. Giethoorn is referred to as “Venice of the Netherlands” as it contains no roads and no motor vehicles. The village is accessible only through canals.

Giethoorn is in the province of Overijssel, in the northern area of the Netherlands. Amsterdam is the closest major city, but even then, you’ll be looking at driving around 75 miles. Naturally, the car will need to be left outside.

As a popular tourist destination, there are plenty of places to stay – including quaint, locally-run bed and breakfasts. International tourists that live in busy, pollution-filled city centers are believed to be among the most regular visitors. Giethoorn is a sanctuary from the occasionally harsh – and toxic – realities of 21st Century life. You can watch the video below.

Locals access everything on foot by crossing old wooden bridges, of which there are over 150 in the village, or by traveling the waterways. This is done by using a “punter.” These small, wooden boats are comparable to the gondolas found in Venice. They are designed and built in Giethoorn, with the riverways in mind.

Professional punteraars – operators of the boats – are found throughout the village. Visitors can also make use of free boats get to get around, though these can be hard to come by during peak tourist season. In addition to tourists taking in the tranquility, the locals get up early to ensure they have transport to get to work.

It’s perhaps unsurprising that Giethoorn is car-free. The Netherlands has long flown the flag of sustainable, eco-friendly living. Windmills are a regular feature of the nation. Our personal favorites are the windmills that double up as pubs, brewing and serving premium-strength European craft beers, but that’s another story for another time.

Cycling is also hugely popular throughout The Netherlands, though. While 45% of Dutch nationals admit to using their car as a primary mode of transportation, 36% prefer to use a traditional bicycle. The flatness of the terrain helps with this, ensuring that riders are unlikely to pull a hamstring battling against a range of steep hills, but it’s also born of a desire to reduce carbon footprint. With this in mind, a cycle path has (presumably reluctantly) been added to the Giethoorn landscape.

Giethoorn will never be a European economic or political powerhouse, but that’s just the way the locals like it. The village is a throwback to a bygone era – one that many people consider to be a simpler time. If you’re keen on experiencing the simple life for yourself, even if just for a few hours, Giethoorn offers some welcome tranquility.

4 prison escapes that are just like a fairy tale