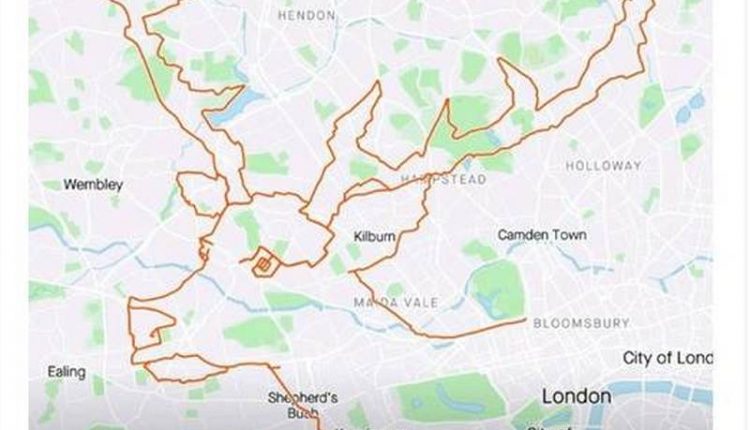 Exercise is undoubtedly important, but sometimes we need a little extra motivation to work up a sweat. For others, exercise is its own reward – but they also have a creative itch that must be scratched.

Take British cyclist Anthony Hoyte as an example. Based in Cheltenham, some 100 miles outside London, Hoyte used the fitness app Strava to spread a little festive cheer at the end of 2019. Hoyte planned a very particular route around London on his bike, ensuring that the resulting heat map created the image of a reindeer.

No doubt it was. Thankfully, Hoyte has a history of engaging in such seasonal shenanigans. In 2018, he underwent a similar task to create an image of Santa. This one took just four-and-a-half hours. Clearly, Hoyte felt he was slacking off and wanted to up his game.

Meanwhile, in 2017, Hoyte constructed a snowman to mark the season.

As you’ll see, Hoyte has gradually been increasing his ambition with every year. There is no way of knowing what he’ll get up to in 2020.

So is it just a Christmas hobby then?

If you’re feeling lazy and uninspired by comparison, we’d love to say so. Alas, Anthony Hoyte doesn’t spend the other eleven months of the year on the sofa eating bon-bons, burning off those calories in December.

Here is a masterpiece from last summer, devised by cycling around the city of Nottingham.

And another example of Hoyte’s creative approach to cardio is this image of a cat in the northern city of Leeds.

Even if you’re unfamiliar with UK geography, you’ll see a theme emerging here. Cheltenham, Hoyte’s hometown, is not receiving much attention. That’s purely a logistical issue. As Cheltenham is comparatively small, our pedaling Picasso has to travel the length and breadth of the country to engage in his twin passions.

How does he go about this?

Have you ever laid on your back and watched the clouds in the sky, observing the patterns and visualizing pictures? Well, Anthony Hoyte has. This is the exercise he compares his ‘Strava Art’ to. He reviews the lay of the land on a map and plots a cycling route accordingly. Hoyte’s training in his former day job as a product designer also seemingly encourages his artistic eye.

His passion began in 2016 when he won a Strava Art competition (yes, there is such a thing) for this ride throughout Bristol.

As is the way of the internet, many people have been quick to sniff at Hoyte’s hobby and achievements. A common refrain is, “he clearly has too much time on his hands. I wish I had enough time to plan stuff like this.”

Well, maybe, we all do. There is no doubt that a great deal of personal sacrifice goes into Hoyte’s creativity. Let’s be blunt here – people with the stamina to cycle around London for nine hours straight in the spirit of creating artwork probably don’t get much downtime. The fitness level and dedication to spend nine hours in the saddle doesn’t come easily.

When we consider that Anthony Hoyte is also 51 years old, his achievements are even more impressive. Let’s all make it our new year’s resolution to celebrate artistic and physically robust endeavor, rather than attempting to criticize those that perform such feats.

That’s a fair question. He clearly has the fitness level to at least have a crack at such a status. What’s more, memorizing these routes will require a great deal of mental focus and concentration. Even following a GPS route can be tricky with all the distracts thrown up by busy cities.

Hoyte, however, seems content to keep his cycling as a hobby. Hoyte describes himself as, “That bloke who drew the giant Strava Snowman … and Santa … and Rudolph … and a whole bunch of other things” on Twitter, suggesting that he is happy with his current level of minor celebrity.

There is no way of knowing exactly what the future holds for Anthony Hoyte, but we’re quite sure it will be interesting. As his artwork becomes increasingly elaborate year-on-year, we’re awaiting 2020’s design with bated breath. Elf on a Shelf, perhaps?