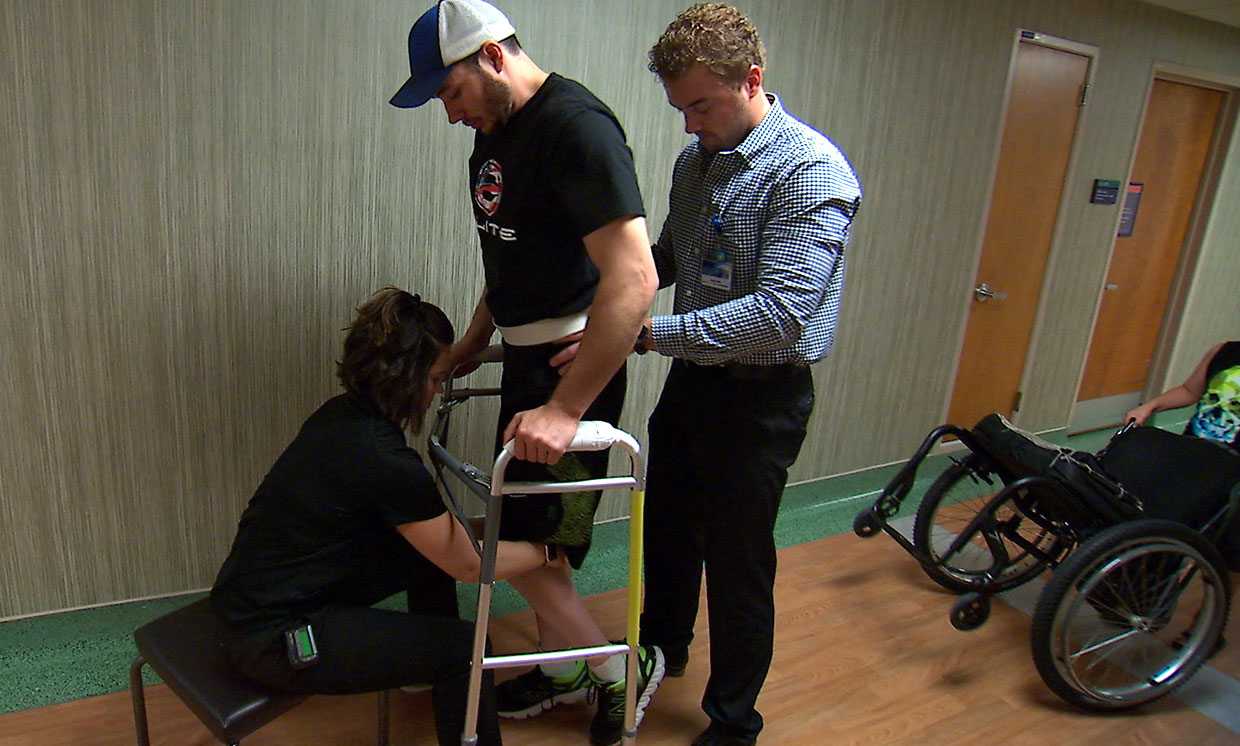 It has long been a dream of technology and science fiction alike to use cybernetic implants to overcome paralysis, limb loss and other physical malfunction, to restore the body to a state as good as, or better than, new.

Now, at the Engineering Lab of the Mayo Clinic in Minnesota, researchers and neurosurgeons have been able to look on with pride as their star patient, a man whose legs were paralyzed in a snowmobile accident four years ago, gets to his feet and walks under his own volition.

It’s been a long road to get to this point, both for the star patient Jered Chinnock and for the neurosurgeon leading the project, Kendall Lee, as reported in Nature Medicine.

“The patient’s own mind and thoughts were able to drive movement in the legs,” Lee reported at a press conference after the event, “We were able to get him to stand independently, and be able to take his own steps.”

This comes after years of research and sheer hard graft, by patient and scientists alike, coming off the back of a precursor study from 2013 that established the possibility of using electrodes to enable people with paraplegia to stand of their own volition.

This study, by Susan Harkema of the University of Louisville, not only demonstrated this incredible enough initial finding but, one year later, those same patients were seen being able to independently move legs and feet, wiggling toes, moving small amounts and even standing, finding life in limbs that had long been paralyzed.

Harkema was also a co-author on the paper in Nature Medicine on this latest breakthrough.

“Recovery can happen if you have the right circumstances,” Harkema says, explaining that the spinal cord “Relearns to do things, not as well as it did before, but it can function.”

For Chinnock, the study began over 43 weeks before the big day. First, an electronic device was planted in his lower back and then over 9 months work of rehab began. The device was a government-approved neurostimulator, currently used for patients with chronic pain, positioned in the epidural space around the spine, just below the site of the injury that caused his paralysis.

It was also located next to a particular group of nerves responsible for controlling the leg muscles. Elsewhere in Chinnock’s torso were located a battery and a pulse generator, to allow the whole bundle to operate.

The researchers then needed to find the precise conditions to stimulate the actions of standing and walking, thus needing to isolate which electrodes to use, appropriate voltage level, and requisite length of stimulation.

Understandably, this made for an intense period of rehab for the star patient but, throughout it all, Chinnock’s one mantra to himself was simply “lift the leg, kick the foot out.” Apart from having the sheer patience, faith in the medical team and grit and determination to stick it out, that’s all he really could do. But still, it was a grueling 43 weeks of work, seeing him walk just that little bit more, and more independently, each and every day.

And now, after all those months of work, Chinnock seems to have achieved the unimaginable, using his paralysed legs not just to stand, not just to take a few paces or wiggle his toes, but to walk the length of a football pitch, aided only by the physical support of a walker to stop him from falling. Oh…and the know-how of the researchers who made all this possible, Kendall Lee and Kristin Zhao.

But if you were wondering how and why the technique actually works, the researchers would like to know just as much as you.

“This is very exciting, but it’s still very early in the research stage,” Lee explains, “We would like to know as well the exact mechanism.”

One theory is that the circuitry of nerves sitting below the injury site is still alive, and more or less capable of action, but merely dormant, so the act of electrical current gives them just the boost they need to jump back into action, albeit temporarily and unevenly.

However, with regular practice, exercise and stimulation it would seem reasonable to assume that they could be built up to some semblance of their former selves, restoring a range of action in once paralyzed body parts.

“In cases where there is tissue intact, the nerves that send signals between the brain and the spinal cord may not be robust enough to produce functional activity,” Zhao explains, adding that, “Epidural stimulation may be enhancing spinal network activity to re-functionalize spared connections.”

Kendall Lee agrees wholeheartedly at the possibilities to come.

“This study gives hope to people who are faced with paralysis,” she says, adding that in the future, “Control may be possible.”

Other options around future treatments may include experimenting with the rehab program, aiming to make it quicker and more streamlined, learning from past experiences as well as looking at other types of paralysis and how to combine what Harkema, Lee, and Zhao have learned with different approaches to the condition.

In particular, they see great promise in using their insights gained with the growing field aiming to use robotic exoskeletons to aid those with spinal paralysis, which has already had its own successes with helping people to walk.

Whatever the near term outcomes, this much is undoubtedly true, humanity has turned a corner in its response to what was once a lifelong and debilitating condition and proven that, with the right technology and the correct understanding, even paralysis cannot stop us moving forward.