Colloidal silver – risks, benefits and is it safe?

Some people say that it’s the “Miracle Cure”. But, science says otherwise. 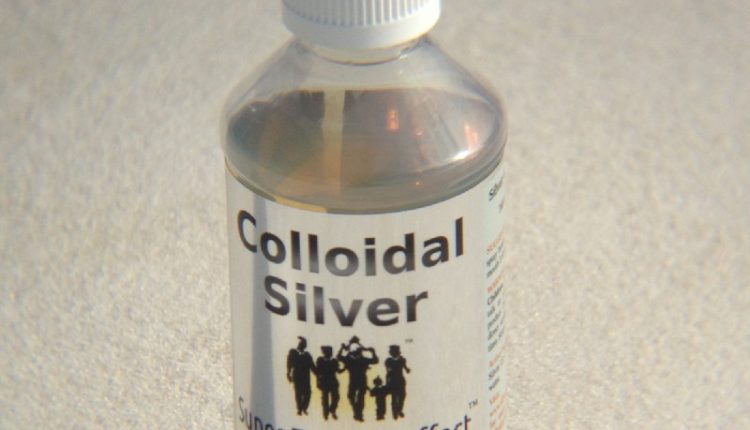 Colloidal silver products are a supplement made from tiny silver particles suspended in a liquid. Make note that this is real silver and the same type that you would find in jewelry, silverware, dental fillings, and most silver-based products.

You may have seen it in nutrition stores or read about it in magazines and online. But is it something you should use, and is it safe?

This article will look in-depth at what colloidal silver is all about, the health claims surrounding it, and if it’s something safe for you to use.

What is colloidal silver?

If you come across colloidal silver, it is most likely marketed as a dietary supplement. You would take it by the mouth just like you would with regular supplements and vitamins. There are also forms of it that can be applied to the skin and even injected.

The particles of silver are so delicate in these supplements that you wouldn’t even be able to filter them out. Some particles get so small that they are referred to as “nanoparticles.”

A nanoparticle is so tiny that they are less than 100nm in size and invisible to the naked eye.

Colloidal silver is said to have antibiotic properties along with being antibacterial and antiseptic. You are supposed to get these benefits when it’s taken orally or applied to the skin. There is still some confusion on exactly how colloidal silver works, but it’s thought that they attack bacteria. (1) (2)

There is various research suggesting colloidal silver attaches to proteins on the cell wall of bacteria. By doing this it can damage the bacteria cell membrane rendering it ineffective.

What other ways does it work?

It’s thought the size and shape of the colloidal silver particles are what make it useful. The concentration in the solution is also seen as necessary too. When there are more silver nanoparticles in a solution, it means there may be more particles to release.

When you take a colloidal silver supplement, it releases silver ions from the particles when they come in contact with moisture – such as body fluid.

These silver ions are the substances considered to give colloidal silver its health benefits. They are thought to be “biologically active” giving it its medicinal properties. Besides damaging bacteria, the silver ions can pass into the bacteria cells, causing more damage. (3) (4)

With less harmful bacteria in the body, better and optimal health is much more achievable. (5)

With all this in mind, what are the supposed health benefits that come from using it?

A vast majority of the people who use a colloidal silver supplement are doing it for gut health. The healthier the gut is, the healthier you will be overall. An unbalance of good and bad bacteria in the gut can lead to inflammation, which is seen as the root of many diseases. (6) (7)

With improved gut health also comes a stronger immune system. When you have a healthy gut and a robust immune system, lower levels of inflammation follow. Better health happens through all this, and colloidal silver is an appealing choice in this matter. (8) (9) (10)

The problem is that there has not been any substantial evidence to support these claims. The National Center for Complementary and Integrated Health state there is no reliable scientific evidence behind this. Along with a lack of evidence, they also state the health risks that come from using it. (11)

The research has revealed some new traits regarding colloidal silver. With bacteria cells becoming leaky and weaker because of the silver, things like E.Coli became 10 to 1000 times more sensitive to antibiotics. (12)

One problem is that most of these studies are conducted in test tubes. Despite this, the claims have made manufacturers use it in multiple products. You find colloidal silver in things like wound creams, wound dressings, and medical equipment. (13)

The problem comes back to issues with ingesting silver. Because of these risks, there have not been proper human studies to investigate the antibacterial benefits. The test tube studies are encouraging, but can’t be seen as conclusive for human effectiveness.

One of the other big claims associated with colloidal silver is the antiviral benefits that may come from it. With the rise and spread of the influenza virus, people are seeking antiviral treatments to protect themselves.

Antivirals are vital because they interfere with an essential enzyme from the flu virus. The enzyme is neuraminidase, and antiviral drugs help by preventing it from escaping and infecting neighboring cells. (14) (15)

Therefore, starting antiviral medication is so important within the first few days of developing the flu. It will help your body to combat it and help prevent the spread to others. Some research has shown that silver can kill viral compounds like the flu. (16)

The various nanoparticle type and sizes are the reason behind this. The problem is there is no way to determine the amount and size of silver nanoparticles in a solution. Every batch can be different, and consistency becomes an issue when dealing with supplements.

There is still a lack of human trials investigating these issues, so the claims can’t be substantiated. Other research suggests that the silver does not kill viruses. Since it’s so hard to conduct safe – and ethical- human studies, supporting claims like this become difficult. (17)

The more severe type of infection can include aspergillosis, which affects the lungs. There is also fungal meningitis, which is a severe affliction to the brain. A weakened immune system may be behind the susceptibility to fungal infection, but treatments are now better than ever. (18) (19)

Colloidal silver is said to be a possible treatment for fungal infections. The science regarding this comes again from test-tube studies. One study showed that silver might stop the growth of some strains of fungi. (20)

A lab setting is not always the best place to conduct studies like this, as many things can kill fungi in a lab. This also doesn’t mean that colloidal silver can kill the same fungal infection in humans.

There are also no studies that have looked at the effects of ingesting silver to treat fungal infections. This whole area does not have a lot of support, and the only evidence, again, comes from test-tube studies.

People don’t want to be ripped off, and they want to know if what they are buying is effective. Despite all the health claims, scientific evidence doesn’t support them. There has been no conclusive evidence that colloidal silver is beneficial to the body when taken by the mouth.

Since it’s not an essential nutrient, it doesn’t have a place as a useful dietary supplement. If there are benefits to silver, supplementing wouldn’t be necessary as you are exposed to tiny amounts of it daily. Silver exposure happens through the air, drinking water, food, and even jewelry. These small amounts of silver you are exposed to are considered quite safe. (21)

The one area where silver seems beneficial is through a topical application. Topical silver appears to be effective in bandages to treat burns, wounds, and skin infections. What’s important to recognize is that topical and internal use are vastly different. (22)

Bandages for wounds are one thing, but there are no legally marketed prescription drugs containing colloidal silver that are taken by the mouth.

Colloidal silver has been used in medications to prevent an eye condition in newborns. The state is conjunctivitis, and the use of silver to treat it goes back to 1881. Research still debates the effectiveness of it, and superior treatments are available. (23)

What are the health problems surrounding colloidal silver?

As it’s been pointed out so far, there is not a lot of research that backs up the claims of colloidal silver. A lack of evidence is one thing, but what about the possibility of severe health problems?

This is where more study has taken place, and it’s why many experts claim it’s dangerous to your health.

As far back as 1999, the FDA warned that it is not safe or effective for treating any disease or condition. Taking colloidal silver can also cause problems when taking other drugs. It leads to the poor absorption of certain antibiotics and medications used to treat thyroid disease.

Significant problems have arisen from supplement companies that have made claims about the health benefits of colloidal silver.

This has resulted in the FDA and the FTC taking action against several companies. These companies had been making misleading claims and risking the health of the general public.

The issue with argyria

Argyria is one of the adverse side effects associated with colloidal silver. Too much silver can lead to a build-up in the body’s tissues resulting in skin problems. The build-up can cause a blueish-gray discoloration of large areas of the skin. This problem becomes enhanced because of sun exposure. (24) (26)

These silver deposits build up in the body and skin, and can also occur in the kidneys, intestines, and liver. Using colloidal silver for too long can also lead to it building up in various other organs throughout the body. If you work in a job that exposes you to silver, argyria can also occur.

Argyria can occur from not only using commercial products but from homemade versions too. With homemade versions, you risk causing further health problems as formulating the product cannot be precise.

It’s thought you are less at risk if you apply colloidal silver to your skin as opposed to ingesting it.

However, substances applied to the skin can be absorbed into the body, and with the small nanoparticles, this is more of a possibility.

In either case, the silver enters the bloodstream and can eventually cross the blood-brain barrier. More health problems arise when this happens, along with the other issues it can cause.

Colloidal silver is not the wonder supplement that some make it out to be. We have used it for decades, and some people like using an older substance over modern medications. You can see now that the risks are not worth it.

There had not been enough studies to back up the claims, and other research shows the damage it can cause.

For those looking to combat inflammation, you are better off using a probiotic supplement. You may also want to use food sources such as kombucha, kefir, sauerkraut, and miso. If you are looking for something antimicrobial and antifungal, try ginger, garlic, and grapefruit seed extract.

There are many natural and safer foods and supplements that can improve your health without damaging it.