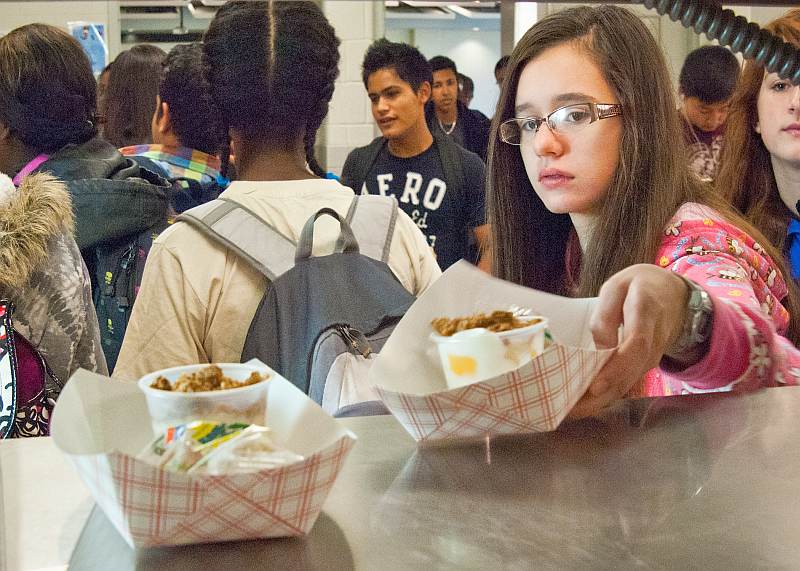 In the midst of a childhood obesity crisis, why are school lunches so unhealthy?

School meals have long been the subject of jokes and ridicule. Derided as bland and tasteless, the bigger issue comes from the deficiency of nutrition found within. The journal Pediatric Obesity claims that over a 90million school-age children are medically obese throughout the world.

Attempts have been made the reverse this trend and to encourage better, healthier eating habits in Britain’s young people. In the UK, celebrity chef Jamie Oliver famously launched a campaign to eradicate poor-quality processed foods from the school canteen diet. The issue remains, however, with many experts fearing that the trajectory will continue until the obesity crisis deepens.

Are school lunches really that bad?

In a word, yes. The meals served in schools are often derided as being high in fat and sugar, served in portions far too large for children. It seems that decision-makers have focused more on what children will eat without complaint than what is actually good for growing bodies and brains.

Let’s stick with our example of the UK. The World Bank claims that some 2million British citizens are undernourished. For a vulnerable child, school lunch may be the only opportunity they have to eat all day. There is a duty to care to ensure that this meal is nutritious. Given the importance of diet to growing bodies, serving junk food is widely regarded as unacceptable.

Lip service has been paid to taking action against this. An independent school food plan was drawn up as part of the UK government’s supposed drive against childhood obesity. While it is a legal mandate for schools to follow this plan, it has not been reviewed or updated since 2013. Significant discoveries and breakthroughs in food and nutrition have been made since then. Why is this not being reflected in school meals?

Is it really the school system that’s to blame?

It’s perhaps unfair to place the entire blame at the feet of schools. After all, we are all responsible for our own decisions in life. When it comes to children, however, it’s unrealistic to expect those choices to be made with long-term benefits in mind.

Peer pressure is a powerful thing for young people, especially teenagers. Veganism and similar dietary choices may be on the rise, but eating healthy is not deemed ‘cool’ by many teenagers and adolescents.

Besides, we need to consider the fact that many young people prefer to avoid the school cafeteria at all. We all remember our own school days. Social time is precious and seemingly fleeting. With just an hour of respite from classes, many young people would prefer not to waste time waiting in line for a meal.

Returning to England once more, the Cambridge Journal of Education surveyed a busy school cafeteria. It found that the focus of the room was less on nutrition, and more on social interactions. In essence, the cafeteria is home to teachers, social cliques, and potential bullies – precisely the kind of people that many schoolchildren will be keen to avoid over lunch.

This encourages children to seek other forms of nourishment, which rarely leads to a balanced diet. The siren song of fast food and processed snacks with being deafening to most teenagers.

We need to work together

Children will rarely choose to eat healthy foods by themselves. This means that we all have a duty – as parents, educators, and society at large – to instill positive eating habits into our young people. The Journal of Public Health explains that food habits we develop while young are often carried into adulthood.

Leading by example can play a major role in this. If we eat well as parents, our children are more likely to follow suit. This will take perseverance and patience, but it will pay off in the longer term.

This does not mean that schools can wash their hands of responsibility, however. While children attend an educational establishment, many decisions are taken out of their hands. What to eat is an example of this.

Streamlining a menu may sound counterproductive, but ultimately, hungry children will eat what is presented to them. Removing the choice of processed junk food and replacing it with healthier alternatives can be crucial. Schools can also place further emphasis on education surrounding food and nutrition. Naturally, these lessons should be continued at home.

Just as Rome was not built in a day, the global childhood obesity crisis will not be resolved overnight. Small steps can lead to giant strides, though. If we all start to take this problem a little more seriously, future generations will be spared the health difficulties associated with obesity. Who knows – maybe school lunches will taste a bit better too.