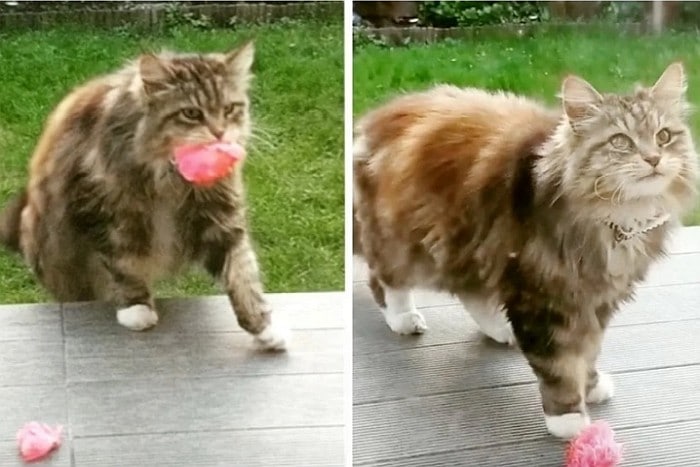 If you’ve ever owned a cat, you’ll know that felines have a unique approach to gift-giving. Many pet parents have returned home to find a dead mouse or bird on their doormat.

If you’re especially lucky, your cat may even see fit to leave the carcass of her kill on your pillow. It’s certainly more unique than a mint, but perhaps this one of many reasons why you don’t find many cats offering a turndown service at luxury hotels.

Of course, it’s tough to know how to react when a cat leaves one of these trophies. You’ll likely gag, hold your nose, don a pair of rubber gloves and hurl the corpse into the nearest bin. That will earn you a side-eyed glare that means, “how dare you? That was a present!”

Perhaps this is why Willow, a cat-based in the UK, has taken a different approach. This affectionate feline has taken to plucking flowers from her backyard and presenting them to neighbors as gifts on a daily basis.

This went on for weeks before the owners of the home realized what was happening. They would find beautiful pink flowers on their decking and wonder who their secret admirer was. Eventually, Willow revealed herself. You can watch her in action below.

Isn’t it just? Naturally, though, Willow seemingly isn’t acting entirely out of generosity of spirit. You’ll notice that she meows as she presents her gift. Her gifting is rewarded by entry into the house of this neighbor – and those of countless others.

Willow lives on a street with numerous homes and considers each and every one of them as her territory. There is nothing new or untoward about that. Cats often gain access to other people’s property and strut about like little feline Fonzies, acting as though they own the place. In most cases, they do. You just pay the rent and act as a facilities manager, foolish human.

Many of Willow’s neighbors assume that this kindly cat knows what she is up to. By gaining access to their hearts, Willow is allowed into their homes whenever she pleases.

This, in turn, means that she will no doubt be rewarded with all the food and treats that her heart desires. And if we know cats, her heart will want a lot more snacks than most pet parents will be willing to provide.

In short, Willow is cute, and she knows it. Be honest – could you say no that face, especially if she brought you flowers?

I want flowers from a cat!

If you’re reading this with a face like thunder, thinking about how the last flowers you received came from a gas station, you may be wondering how you can tempt a cat into treating you like Willow.

The truth is, you can’t. Felines are famously picky. It appears that Willow’s neighbors just struck the local pet goldmine, moving into a territory that housed the friendliest cat on the block. Most felines are considerably less welcoming to new arrivals.

If you’re keen to chance your arm and make friends with the local cat population; however, it’s easier than you may think. The secret is not to be too needy.

If you’ve ever wondered why cats are drawn to people that hate them, you have your answer. Cats are moody and particular. They like attention to be on their terms. This means they can sense indifference from humans – and that instantly becomes hugely appealing.

A cat knows that this person won’t force them into cuddles as they don’t want to be around cats. This instantly makes them a preferred human. It sounds like a paradox, but hey, that’s cats for you.