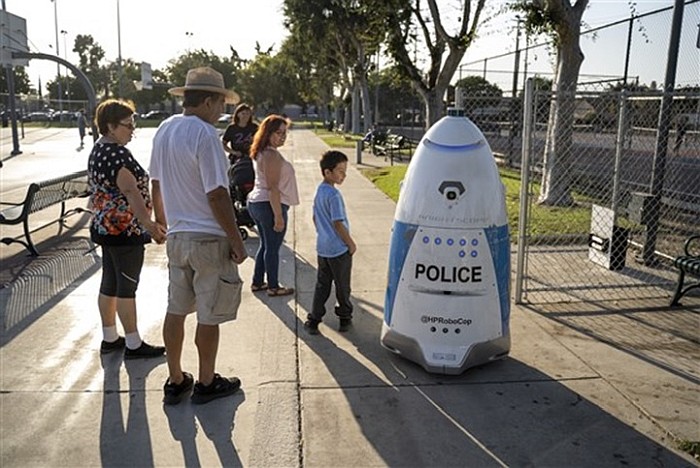 Not everybody is a fan of law enforcement. Perhaps this what inspired the Californian city of Huntington Park to take a more modern approach to policing.

Let’s be clear, though – this particular RoboCop is nothing like Alex Murphy from the ultraviolent 80s action movie. In fact, he looks more like R2D2. You can watch HP Robocop at work in the video below.

HP Robocop intends to provide the local authorities with an extra pair of eyes and ears. In theory, he notifies the police force when something untoward is unfolding.

What’s more, members of the public that witness a crime can report it to HP Robocop and relax as justice is done. At least, again, that’s the theory.

There’s never a cop around when you need one

Cogo Guebara was minding her own business in Salt Lake Park when a fight broke out in the parking lot. Ms. Guebara did what anybody would do in such a situation. She looked around for the nearest police officer, so action could be taken before anybody was seriously hurt.

HP Robocop was making his rounds at this point, so Ms. Guebara raced over and attempted to notify him of the problem. A button on HP Robocop’s control panel supposedly connects people to the local police department. HP Robocop also sports a range of HD cameras, ensuring that he can record any crimes and present video footage as evidence in court if required.

Unfortunately, this particular cop appeared to be off-duty. When Ms. Guebara frantically attempted to report the incident, the mechanical peacekeeper told her to “step out of the way.” After a while, having continually refused to help, HP Robocop rolled on his merry way, humming what was described as “an intergalactic tune.” Way to protect and serve, buddy.

Ms. Guebara resorted to calling 911 on her cellphone. Fifteen minutes passed before officers arrived on the scene, by which time the fight was over, and one woman was left injured and needed hospital treatment. HP Robocop continued to make his rounds while this was taking place, occasionally stopping to remind local children to keep the park clean.

So was HP Robocop malfunctioning, or just unhelpful?

Neither is a good look for the Huntington Park PD, especially seeing as the robot costs in the region of $70,000 to lease. However, it was revealed that HP Robocop’s crime-reporting functionality is not yet active. Rather than the police department, the calls are directed to the company where the robots are designed.

Now, we’re not claiming anything untoward about the clearly intelligent men and women that created HP Robocop … but let’s be honest here. The only scientist that you want responding to a crime is one that gained superpowers from a lab accident.

This, it is claimed, is why HP Robocop is not yet being advertised as the crime-busting future of law enforcement. Perhaps it’s advisable to wait a while before doing so, too. This is not the first time that one of these droids has caused an issue.

Wait, there’s more than one Robocop out there?

Yep, there are actually about 70 – all of which are designed by the same company, Knightscope. Not all of these droids have been assigned to the police, though. Most act as security guards for gas stations, airports, and businesses.

Back in 2017, an earlier model had a mishap in an office complex in Washington, DC. The Knightscope K5 was making his rounds when he fell into a fountain. We’re not sure if he got back to work afterward, or this tragic accident ended his life just one week from retirement. We hope Mrs. K5 received a generous compensation payout if so.

A year earlier, a toddler was knocked over by a similar droid in Silicon Valley’s Stanford Shopping Center. It’s claimed that the machine collided with the child, then rolled away without a care in the world. It all sounds like the world’s slowest hit and run incident.

It seems that we’re still a way off robots policing the streets on a full-time basis, and we’ll need to place our faith in the boys and girls in blue for a while longer. In the meantime, be on your guard while in Salt Lake Park in Huntington Park. HP Robocop may not actually DO anything, but he’s always watching.