Tired of bears raiding his honey supplies, one beekeeper turned them into taste inspectors 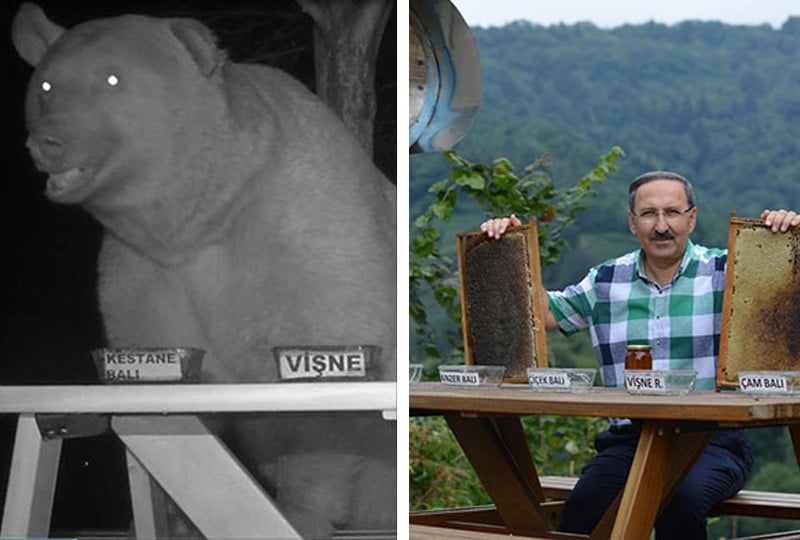 There are two things that we know about bears at The Sized. The first is that they love honey. We read enough Winnie the Pooh stories in our childhood to be certain of this. The second is that we absolutely, definitely have no intention of starting a fight with them. Winnie may be lovable. The average brown bear, however, would maul somebody as soon as look at them.

Turkish beekeeper Ibrahim Sedef knows this better than most. Sedef is based in Trabzon and found that hungry bears would regularly visit his beehives after dark. Great for nature enthusiasts, but not so great for a honey supply. Sedef would usually find his property trashed in the morning, and reviewing overnight security tapes confirmed that Yogi and Boo Boo were to blame.

Sedef attempted several techniques to spare his beehives from being destroyed. He placed security fences around them, but the bears made light work of these. He tried placating his nocturnal visitors with other food, but they were certain about what they wanted.

Unlike the charming Paddington, these bears had no interest in a marmalade sandwich. Only fresh honey would do. This was costing him over $10,000 in damages and lost honey supplies.

Before long, Sedef was at his wit’s end. You might say that this situation was unbearable. This when he decided to take a new tack. Deciding that attempting to deter the bears was a fool’s errand, he took a new tack. He decided to turn the sophisticated palates of these animals to his advantage and use the bears as unpaid quality control testers.

Sedef set up four bowls of honey on a table within the area that the bears visited. This was step one – it ensured that his bees were no longer bothered, and his hives were not damaged. The bears tucked into the honey from the bowl instead.

What’s more, Sedef placed different types of honey into each bowl. He was curious to see if the bears had a preference for one kind of honey over another. It turned out that they did. Bears, it seems, have sophisticated palates.

Much like the story of Goldilocks, these bears tried a few different varieties of honey before they decided which was just right. Anzer honey becomes a firm favorite of these nocturnal visitors – which also happens to be the most expensive variety that Sedef sold.

The bears would make a beeline for this particular honey every time. Sometimes, they’d gorge on this variety alone, completely ignoring the alternatives – which included such popular types as cherry blossom honey.

Making the best of a bad situation, Sedef realized that he was onto a winner with his Anzer honey. Bears tend not to be shy about expressing their displeasure. If they were not enjoying their snack, they’d make their feelings known. As they came to expect a nightly treat, however, Sedef and his visitors came to an agreement.

What’s more, Sedef realized that he could charge substantial prices for Anzer honey. Two pounds of this nectar retails for over $300. If you have that kind of cash to spare, you can rest assured that you’re tucking into the finest produce possible. Just beware – you may need to share it with a hungry visitor.

Why is Anzer honey so tasty?

You may be surprised at the idea of bears having such discerning taste. After all, they scoop live fish straight from a river on other occasions. That suggests that they’re less than fussy.

It’s all about the location. The Anzer’s plateau is home to up to 90 unique flowers that only grow in this region. This means that over 300 different types of pollen are located in the area. That’s the perfect place to keep a beehive. Anzer honey is considered to have healing properties, as well as tasting sensational.

This explains why Sedef’s visitors were not content to take the bear essentials. They wanted the good stuff – and with good reason.

Sedef is undoubtedly far from grizzly when he thinks about his visitors. He doesn’t mind the damage that these bears have done to his property. Watching the footage, he now looks upon them with affection. That’s an admirable philosophy.

And, let’s be honest, it’s a lot more sensible than attempting to take on a pack of hungry bears. Would you be prepared to tell them that you’re cutting them off?