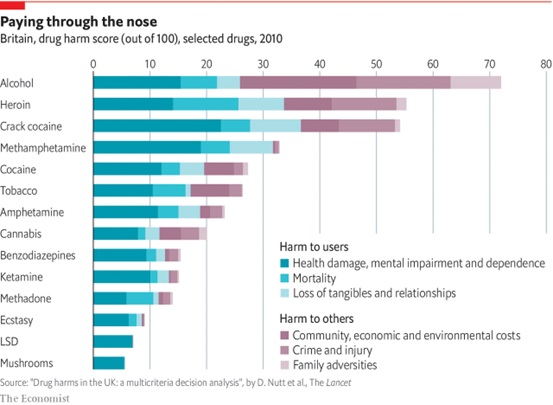 If alcohol were discovered today, it would be classified as a Class A drug. That’s the view of a group of influential British politicians, who published a study in the BMJ about the availability of alcohol and tobacco for legally compliant hedonists.

Of course, when we put these claims under the microscope, they’re a classic case of whataboutery. The fact is, alcohol hasn’t recently been discovered. It’s been a part of civilization – and a lack of thereof – since before time as we know it was even recorded.

All the same, musings like this will always provide food for thought. They certainly sparked the imagination of the Global Commission on Drug Policy, an international think thank that reviews the prohibition and legalization of intoxicating chemicals.

The Commission had issued a report, entitled Classification of Psychoactive Substances: When Science Was Left Behind. Within this report, drugs – whether legal or prohibited – are ranked according to the danger. That’s the risk they pose to those who partake in their use, and to society at large.

The UN’s war on drugs

To understand the results of the Commission’s report, and why they contrast with most international drug laws, we must view things from the perspective of the United Nations.

It’s the UN that assigns drugs into a variety of different categories, known as schedules. These decisions are made based upon the impact and side effects of the drug, compared side by side with any potential health benefits. A drug that serves no medicinal purpose will automatically be tagged as dangerous – ensuring that their possession and use carries the maximum possible penalty.

You will no doubt be familiar with this. An increasing number of territories are opening their minds to the medicinal properties of marijuana. Even if you’re unlicensed, it’s unlikely that you’d panic too much about retaining a small amount in your possession.

Marijuana is a small fry in the eyes of most law enforcement agencies, especially when compared to the likes of heroin or cocaine. While the latter technically enjoys medicinal properties, it would take a compelling orator to convince anybody that it’s in their possession for this reason.

Despite all this, the Global Commission on Drug Policy considers this approach from the UN to be hopelessly outdated. If the average member of the public were approached and asked to name the most dangerous drug in the world, they’d likely answer heroin.

The truth, at least according to the Commission, actually tallies up with the beliefs of those British politicians. It’s alcohol that is responsible for more of society’s ills than any other intoxicating subject.

The sliding scale of dangerous drugs

To gain more insight into the dangers of alcohol, especially in comparison to less socially accepted drugs, we need to return to the UK. Back in 2010, The Lancet published a fascinating study into the sliding scale of drug harm in Britain.

The legal classification of drugs was ignored, and instead, substances were measured against a series of criteria. These included the harm that a substance would inflict upon an individual (physically, mentally, and medically), alongside the collateral damage inflicted upon the user’s family, friends, and society at large.

From here, every substance was awarded a score out of 100. Take a look at the results below.

Surprised? Maybe not. We have already spoiled the outcome for you, revealing that alcohol has the dubious honor of topping this chart.

Effects of alcohol consumption on the human body

What may raise an eyebrow, however, is the idea that heroin would potentially drop out of the second spot. While the dangers of this incredibly intoxicating narcotic are well known, it scores so highly in part due to its underground status.

Heroin exchanges hands and enters veins through a labyrinth of underground and dubious means. Naturally, this ensures that users rarely find themselves in positions of luxury. Very few heroin addicts are injecting a pure dosage of the drug. They are forced to take their chances on what’s available, hoping that it has not been cut with anything too toxic.

Also, sharing needles remains a commonplace and troublesome necessity for many addicts. These factors – obviously coupled with the physical impact of the drug itself – ensure that heroin remains one of the most dangerous substances of all.

And yet, despite this … heroin still sits behind alcohol in these standings. What does that tell us?

The impact of alcohol

The physical impact of excessive drinking is well regarded. No reputable healthcare professional will condone excessive alcohol consumption, as much as many of us cling to the argument that, “a glass of red wine is good for the heart!”

Those of us that enjoy the occasional glass of wine with dinner are not the real source of this data, though. It could be argued that we’re part of the problem and not the solution – but that’s a philosophical discussion for another day. What may not have been previously considered is to impact ratio of alcohol.

Look at the chart again. It would appear that alcohol has a score of 25 when it comes to harming the user. That’s lower than the likes of heroin and cocaine, and it feels like a minor victory for those that enjoy a tipple.

Just because some people abuse alcohol, it’s not harmful in itself. Alcohol itself is a neutral construct; it’s how it’s used that can prove problematic. Anything can be dangerous in the wrong hands, even cough syrup.

These are all arguments that a firm supporter of alcohol would put forward. Look at the chart again, though. The societal and relational impact of alcohol is a whopping 45+. That’s enough to give anybody pause for thought, especially when compared to other scores.

So what’s the answer?

Alcohol has long been linked with the destruction of relationships, irrational behavior, and criminal damage – without beginning to think about the impact of intoxicated driving, which remains a scourge.

Now, of course, this data could easily be accused of being skewed. The impact of alcohol scores so much higher because it’s so readily available. If heroin could be purchased from the supermarket as quickly as a stalk of broccoli and a bag of potatoes, the statistics, and reports of societal harm would presumably shoot through the roof.

Maybe they would. The truth is though, we have no way of knowing – because the likes of heroin are not readily available. You will have your own views on whether that is a good or bad thing. That debate was not the purpose of the Commission’s report. Instead, it was merely to point out our somewhat misguided priorities and beliefs.

An individual known to enjoy using LSD would likely be shunned from many aspects of polite society. They would be dubbed unsafe, a risk, and a potential menace.

If that same person kept their hallucinogenic habit to themselves, however, and claimed to drink regularly? Nobody would bat an eyelid. After all, how else could anybody be expected to cope with life in the 21st Century?

Alcohol is ingrained into modern life, and it’s doubtful that it’s going anywhere.  After all, we tried prohibition around a hundred years ago, and that didn’t go so well.

All the same, it never hurts to be more mindful of our alcohol consumption. The more we normalize intoxication and environmental damage, the more commonplace it will become. Eventually, something will need to be done about this. If we can all become a little more conscientious and educated about our substance usage, we can delay that intervention for as long as possible.