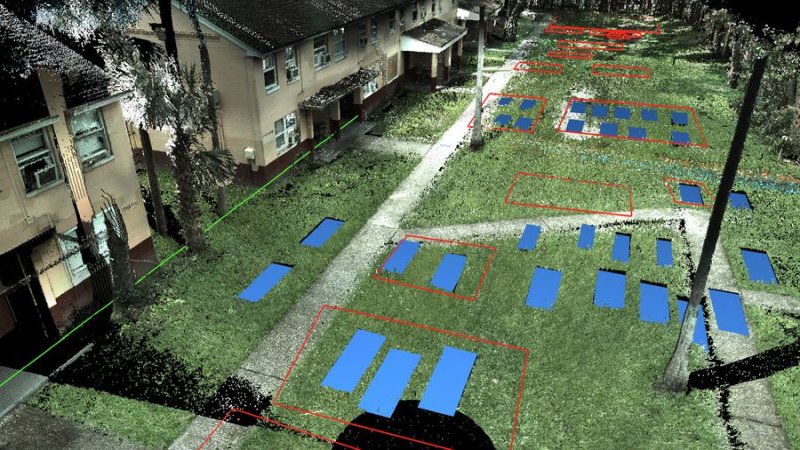 Anybody that has watched a horror movie will tell you to be mindful of property built over graveyards. Native American burial grounds are often used to explain why impossibly attractive young couples can afford a dream home before a series of unfortunate events befall them.

For the citizens of Robles Park Village in Tampa, a recent revelation resembles the events of a horror flick. Sadly, it’s all too real. Some 120 coffins have been discovered beneath the grounds of apartments of this complex, which was built in the 1950s.

It has been revealed that these coffins were formerly buried in the Zion Cemetery. This was the first cemetery built for the remains of African Americans in Tampa. For the longest time, these remains were thought lost.

Questions over what happened to the bodies buried in the Zion Cemetery have long raged in Tampa. These souls can finally rest in peace. Sadly, the circumstances of how they ended up beneath Robles Park Village is a sordid tale.

Why were these bodies buried under apartments?

Richard Doby founded the Zion Cemetery in 1901 and sold it in 1920. The slow and steady process of erasing the grounds began in 1925. For reasons that were never made clear, the cemetery was no longer marked on maps.

During its period of operation, around 800 people were believed to be buried in the cemetery. It’s likely there were more. Record keeping of the deaths of African Americans was frequently patchy during this period.

There are records of a handful of bodies being moved to other local Tampa cemeteries. The rest of the bodies were seemingly forgotten about, however. As the cemetery ceased to be acknowledged and recognized, plans were formed for property to be built on the land.

By 1951, work began to build Robles Park Village, a complex housing 67 apartment blocks. Local authorities checked the area and found three caskets that were once buried in the Zion Cemetery. These were relocated to another burial ground. Rather than search for more coffins or remains, however, work proceeded on the site. There were deadlines to meet and money to be made.

Robles Park Village was built over the land that once hosted the cemetery. Perhaps most shockingly, due to segregation, the apartment blocks were only available to whites.

How were the coffins located?

Paul Guzzo, a reporter for the Tampa Bay Times, had long investigated the strange case of the Zion Cemetery and what happened to the bodies buried within it.

Believing the apartments of Robles Park Village to be built on the land, he notified the Florida Public Archeology Network. Employees of this establishment looked at old blueprints of the cemetery and compared them to maps of the property.

Finally, radar was used to inspect the territory. This radar was potent enough to penetrate the ground, providing a clear sight of what was found underneath. This was when the shocking revelation was made. The unmistakable shape of coffins presented itself.

Naturally, the discovery of these coffins has caused quite a stir. For many, it’s been confirmation of what has long been suspected. Residents of Robles Park Village have long shared ghost stories among themselves, feeling dubious about their surroundings.

Further investigation is obviously warranted. Local senator Janet Cruz has requested funding to continue searching the premises, finding answers for the ancestors of those buried on the site.

The Tampa Housing Authority had long planned to tear down and redevelop Robles Park Village. Now that human remains have been found on the site, this process will be fast-tracked. The families living in apartments directly above the remains have already been rehomed.

It’s not just the Tampa Housing Authority that has a stake in the land, however. Private business Sunstate Wrecker Service also owns part of the land. The owner of this company has granted the local authority carte blanche to do whatever they see fit, keen to ensure that the remains are handled respectfully.

The remainder of the land belongs to Richard Gonzmart, a local restauranteur. Gonzmart purchased the land with the intention of opening a culinary school, and his property currently hosts a number of warehouses. Until research into the rest of the land is concluded, it’s unclear whether Gonzmart’s ambitions will come to fruition.

Once the last residents of Robles Park Village have been rehomed, the properties will be torn down. A memorial for those buried in the cemetery will be erected in their place. Finally, those forgotten for far too long will be able to rest in peace.